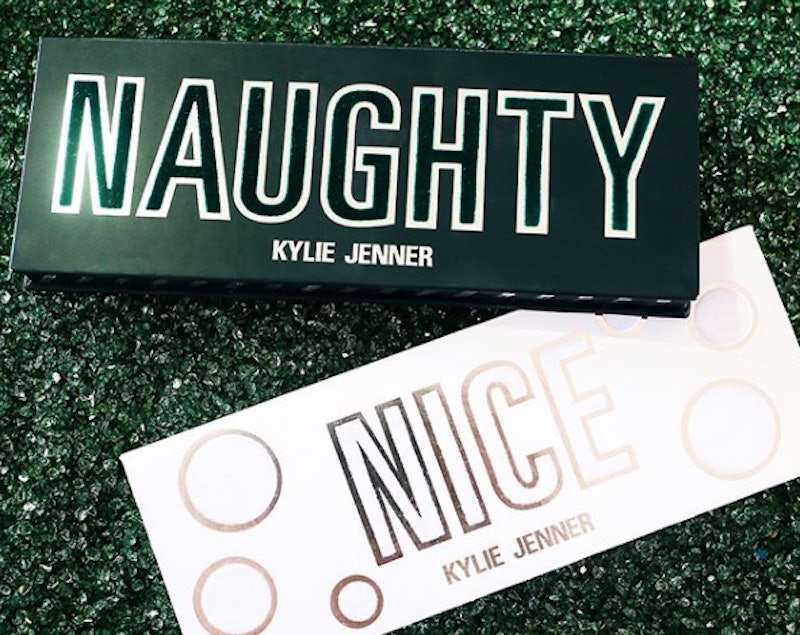 The year is quickly coming to an end, but that doesn't mean the makeup is stopping anytime soon. For it's projected last collection of the year, Kylie Cosmetics is debuting a pair of palettes called Naughty and Nice. Well, fans are obsessed to say the least. Because if a Kardashian-Jenner makes a product, the people will come — no matter how similar the seemingly polar products look.

There are always certain holidays that people look forward to the most. When it comes to Kylie Cosmetics, fans know that the season will be filled with tons of new makeup launches. In 2016, the company came out with brand new palettes, mini and regular sized Lip Kits, liners, tree ornaments, and even a makeup bag and stocking to go with it.

This year, there are just two palettes — Naughty and Nice. Fans are still just as excited about the launch though. No matter what list you're on, there's a selection of gorgeous shades for you. Naughty has a mix of matte and shimmer cool red tones with a few grays and tons of shimmer. Nice is extremely similar, with the exception of a slightly warmer tone.

According to the Kylie Cosmetics Instagram post, the Naughty and Nice Palettes will be arriving on Nov. 22. If the makeup brand's pattern stays the same, that's enough time for at least one restock before the holiday.

Despite the shadows on the inside not being all that different, the outsides have completely different personas. Because, well, we all have a little naughty and nice in us no matter what we look like.

The Naughty Palette is all black with silver foiled stripes, while the Nice Palette is all white with silver glittery stripes. The brand didn't say how much the palettes will be, but there's a good chance that they'll be $52, just like the other similarly shaped 14-shade sets on the website.

According to Jenner's Instagram posts, The Wet Set will also be available on Nov. 22. This isn't a part of the holiday collection, as it has been released before, but it's definitely getting fans excited.

All of this also comes around the same time as Jenner's Topshop pop-ups. The 20-year-old will be holding limited time shop in seven Topshop locations. The brand also recently announced that there will be two exclusive Lip Kit Sets to go with it.

Despite the fact that Kylie Cosmetics' Holiday Collection isn't that large and the palettes look extremely similar, people are excited to get their hands on them. Fans don't seem to prefer one palette over the other, either.

If these fan reactions have anything to say about it, the Kylie Cosmetics elves will be hard at work making sure there are enough to go around.

People are shook to the core about both of the palettes.

Too much in a good way, if those emojis have anything to say about it.

Even people that don't normally eye up Kylie Cosmetics are eyeing them up.

All caps. People are not playing around this time.

Fingers crossed that they're available as a bundle because fans want them all.

At this point, it's not a want. It's apparently a need.

Sorry, we don't need you anymore. We have Kylie Cosmetics.

You can't fight Jenner forever, my friends. The holidays are the perfect excuse to stock up too.

Leave it to Kylie Cosmetics to make everyone rethink their holiday shopping list — regardless of whether you're naughty or nice.

Set your alarms, because something tells me that these palettes are about to fly off the virtual shelves.