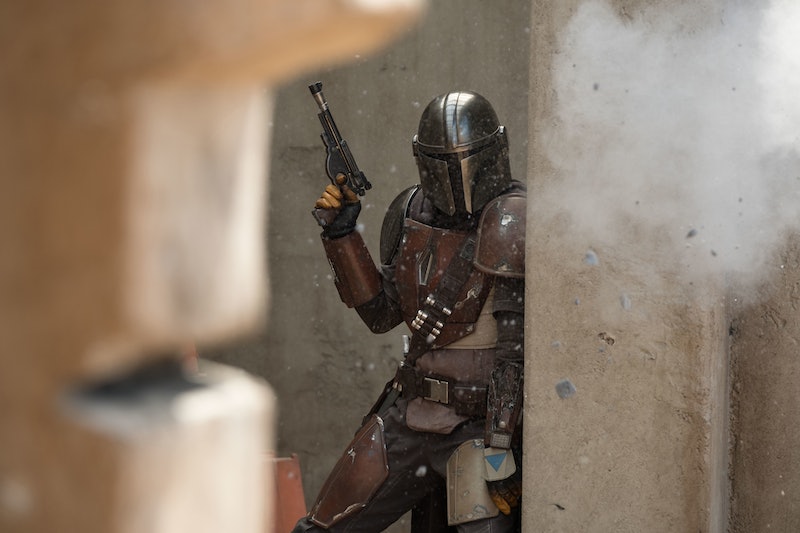 With so many Star Wars movies and TV shows being released simultaneously, it can be difficult to keep the timeline straight. And now that Disney+ is releasing The Mandalorian on Tuesday, Nov. 12, the chronology has become even more complex. Fortunately, it's not too hard to parse when The Mandalorian takes place — five years after The Return of the Jedi, per the official Star Wars site, and 25 years before the events of Episode VII: The Force Awakens. As such, the Disney+ series also occurs before the First Order took power — the dictatorship founded by Supreme Leader Snoke in Episode VII: The Force Awakens.

"If you look throughout history, it's fun at first, but it gets very complicated very quickly. The idea of that world after The Return of the Jedi and what would happen and what sort of characters would survive, and what it was like until the new Republic took over," showrunner Jon Favreau said at Chicago's Star Wars Celebration, per the Hollywood Reporter. "You have vestiges of the Empire. You have only the strong surviving. You have chaos taking over the galaxy."

In other words, parsing the complex Star Wars timelines can get confusing fast. For that reason, here's a handy primer to what has happened involving the Mandalorians before the Disney+ series takes place.

Mandalore Is Defeated, Then Freed

The animated series Star Wars: The Clone Wars depicts Duchess Satine Kryze declaring that the Mandalorians would remain neutral during the Clone War, per the official Star Wars site. Darth Maul consequently takes over the planet of Mandalore with the help of a rebel Mandalorian group known as the Death Watch.

Satine is then executed, but her sister, Bo-Katan, refuses to concede to Darth Maul. Eventually, she and a Mandalorian named Sabine Wren, who wields Darksaber, overthrow the Empire, returning to their people's roots as warriors.

Episode II: Attack of the Clones — Jango Fett Is Introduced

Audiences meet a Mandalorian and bounty hunter named Jango Fett on the planet of Kamino in Episode II: Attack of the Clones. He is also the father of Boba Fett, whom audiences would have already seen in the original trilogy. Except Boba's not so much Jango's son as his genetic clone, but whatever the case, he's raised Boba as his own.

Later in the same film, the mercenary is killed by Mace Windu (Samuel L. Jackson), and a young Boba swears to avenge his father's death. Audiences learn more about the young bounty hunter's education in the aforementioned Clone Wars series, but he doesn't return to the films until Episode IV.

Although Boba Fett appears briefly in Episode IV: A New Hope as one of Jabba the Hutt's mercenaries, he has a meatier role in Episode V: The Empire Strikes Back. In this installment, Darth Vader hires the bounty hunter to capture the Millennium Falcon and its inhabitants. Later, a frozen-in-carbonite Han Solo is given to Boba, who then loads him onto his ship, Slave I, in order to sell him to Jabba.

In the final movie in the trilogy, Boba falls into the Sarlacc Pit while fighting Han and Luke Skywalker. He's assumed dead, but some fans are still holding out hope.

Episode VI: Return of the Jedi — The Empire Falls

As for the rest of the film, Luke is finally able to defeat his father, Darth Vader, and Emperor Palpatine by extension, thus ending the reign of the Empire.

Fans don't know very much about this new series protagonist — he is wearing armor, after all — but that's all part of his mystique. "The Mandalorian is a mysterious, lone gunfighter in the outer reaches of the galaxy," star Pedro Pascal said of his character at the same Star Wars Celebration. "Some might say he has questionable moral character, which is in line with some of our best westerns, some good samurai. All the good stuff. He's a badass."

However, while previous Star Wars properties had a very clear line between good and evil, The Mandalorian blurs the moral boundary. "This doesn't turn into a good guy universe because you blew up two Death Stars," Mandalorian director Dave Filoni told Entertainment Weekly, referring to the planet-sized weapons destroyed in Episode IV: A New Hope and in Episode VI: The Return of the Jedi. "You get that the Rebels won and they're trying to establish a Republic, but there's no way that could have set in for everybody all at once."

But while the Disney+ series takes place after the Empire's been defeated, audiences already know that a new villain will arrive in the next 25 years. At the moment, however, the Galaxy is a bit like the wild west, with every man (or Mandalorian, as it were) for himself.

More like this
'The Last Of Us' Has Officially Been Renewed For Season 2
By Darshita Goyal
Rupert Grint Just Shared A *Major* Update About Ron Weasley’s Future
By El Hunt
'Boiling Point's TV Sequel Is Set To Deliver A “Rollercoaster Of Emotions”
By Catharina Cheung and Sophie McEvoy
Netflix Shut Down 'Bridgerton' S3 Rumours About A “Very Dark” Storyline
By Bustle
Get Even More From Bustle — Sign Up For The Newsletter
From hair trends to relationship advice, our daily newsletter has everything you need to sound like a person who’s on TikTok, even if you aren’t.