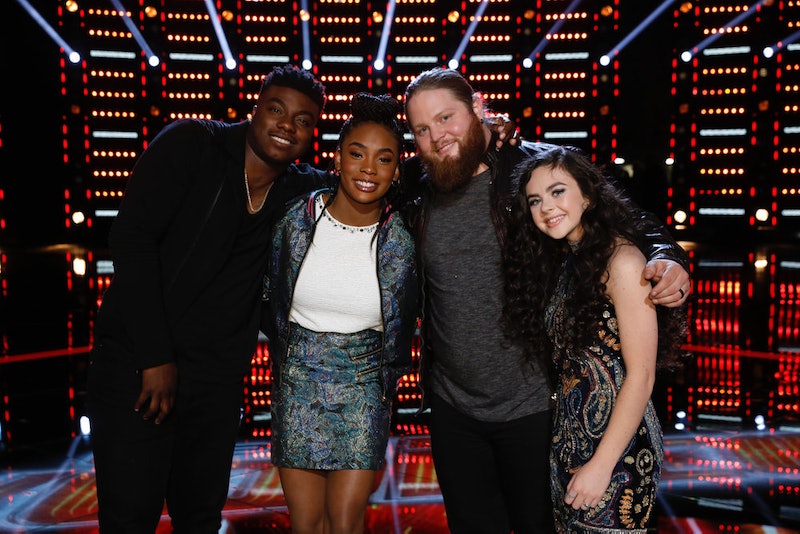 The holiday season may come with a lot of perks, like opening a bevy of gifts and feasting on delicious food until your heart's content, but it also means parting ways with some of your all-time favorite TV shows. Whether they're wrapping up a season or simply going on a temporary hiatus, going without your weekly TV viewings can always be a struggle. But thankfully, those breaks don't tend to last forever, especially when it comes to widely popular reality shows like The Voice. So now that Season 15 is coming to a close, when does The Voice Season 16 premiere? Have no fear, for your beloved singing competition won't be off the air for very long.

As of now, NBC has yet to divulge the exact premiere date for the next season, however, there is a distinct pattern this series follows when it comes to its spring and fall schedules, so it shouldn't be too hard to predict roughly when it'll return. Thankfully, by all accounts, this break between seasons will be relatively brief. Typically, The Voice airs two seasons per year: one that airs in the spring and the other that airs in the fall.

The fall seasons all end at some point in December, which is exactly what's happening this year. So when does the spring season usually pick up? Traditionally, the follow-up season debuts at some point in February, which will be here before you know it.

Throughout the past 15 seasons, there's only been one time that the show's spring season has aired in a different month other than February. (Season 4 kicked off on March 25, 2013.) Apart from that one time, February as been the standby month for the series, so there's no reason to believe Season 16 won't follow the same format. Season 14 premiered on Feb. 26, 2018, which means odds are Season 16 will begin on Feb. 25, 2019.

Of course, it's important to note that this is all just pure speculation for now. We won't know when the show is coming back for sure until NBC released its official spring schedule. But it's something to keep in mind when you find yourself wishing you could turn on the TV and watch it. Granted, February may still feel like a long ways off from now, but it's definitely better than waiting until next fall to get your singing fill, especially since Season 16 will see the likes of John Legend as one of The Voice coaches. (He'll be replacing Jennifer Hudson's position and join returning coaches Kelly Clarkson, Adam Levine, and Blake Shelton.)

“I’m thrilled to join the coaches of The Voice,” Legend said in a statement, as reported by Variety. “I’ve been a guest and mentor on the show multiple times and I’m so excited to discover talented singers and help them make the most of their gift. I hope the world is ready for #TeamJL.”

Needless to say, when the series does return (whenever that may be), it's gearing up to be potentially the best season yet.