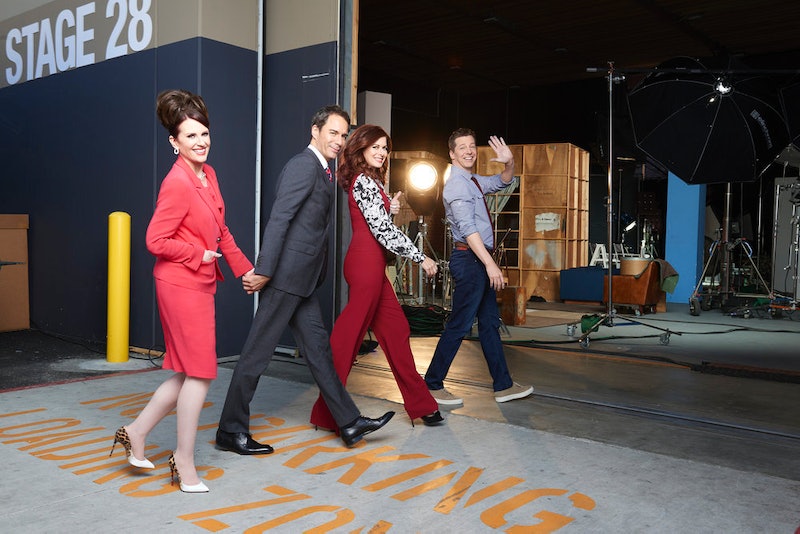 Oh, honey! Will, Grace, Karen, and Jack aren't going anywhere any time soon. Though the series wraps its 10th season April 4, NBC announced thatWill & Grace will return for Season 11 all the way back in March 2018, before it had even finished Season 9. The third installment of the revival is set to premiere with 18 new episodes in fall 2019, the same time of year it always has, though a specific premiere date hasn't yet been announced. For any other show, 11 seasons might seem like the beginning of the end, but for Will & Grace, it looks like things are just getting (re)started...

"As far as I'm concerned, we can't get enough of Will & Grace and 23 more episodes is music to my ears," NBC chairman Robert Greenblatt said in a statement, per TV Line. "We're eternally grateful that Debra [Messing], Eric [McCormack], Sean [Hayes] and Megan [Mullally] feel the same way and wanted to keep this good thing going."

In October 2018, around the time of the Season 10 premiere, Vulture caught up with creators Max Mutchnick and David Kohan, who talked about how having these large, advanced orders for the show has given them the freedom to lean into their creativity without getting bogged down by ratings.

"We don't know what we're doing in the third season, really," Mutchnik explained. "But Bob gave us a luxury that you don't get when you make these shows anymore. We're allowed to creatively be calmer, because we know we're not living and dying [by ratings] every week. Having that is an incredible gift from Bob Greenblatt, who's the No. 1 reason that all of this has worked out."

Making the show 11 years after the original has definitely allowed Mutchnik and Kohan to take what would have been considered enormous risks back then. Mutchnik told Vulture about a scene from Season 2 in which Jack and Estefan are showering together, and how he wondered whether that had ever actually been shown on network TV before.

"We have these two gay men taking a shower together and nobody made mention of it," Mutchnik noted. "No one at the network, no one from the writing room, and none of the actors. It was only after it was over that we thought, 'I wonder if this has actually ever been in a broadcast comedy? Two guys talking about their relationship while taking a shower?'"

Speaking in a panel at Paleyfest in March 2018, guest star Dan Bucantinsky, who plays Neil, explained that in its current revival, Will & Grace has a different responsibility when it comes to being progressive than it had the first time around.

"Now we are dealing with an expectation that gay guys should be married," Bucatinsky noted. "We look at Will now and think 'when's he gonna settle down and have kids.' I don't think we were asking that in seasons one through three."

But Eric McCormick, who plays Will, said that, at least for right now, settling down is not in the cards for his character. "People always say, 'When is Will going to settle down,' and if Will settles down, I don't know how much fun that is," he said. "The fun for us is that we keep trying, fail and find each other. Maybe in Season 15 the show will morph. For right now, I love that the key to Will is that he tries and is not afraid to fail because he always has [Grace]."

From the sounds of it, cast, crew, and network execs alike expect Will & Grace to keep going for a long time to come.