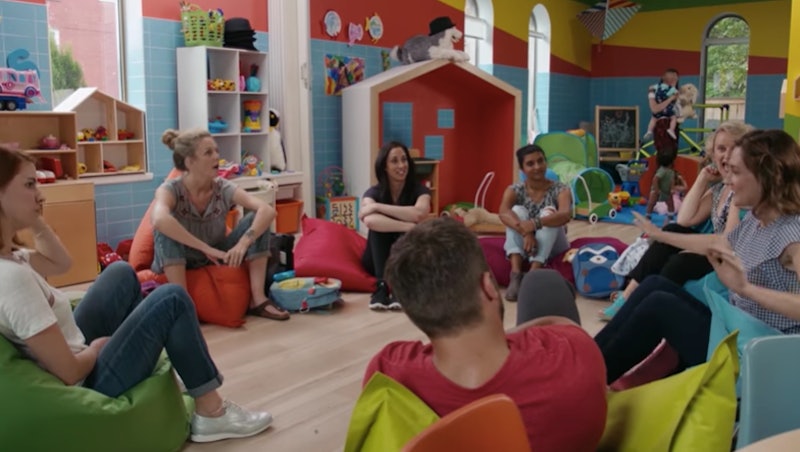 Good news, Catherine Reitman fans: not only does her new show Workin' Moms, hit Netflix on Feb. 22, but it's already set to return for Seasons 2 and 3. The series originally premiered on Canada's CBC Network in 2017, but will now be made available to U.S. fans thanks to the streaming service. Reitman, who you may know from Black-ish, created the show and now serves as a writer, director, and star. She plays Kate Foster, a PR exec who joins a judgmental mommies' group with her two BFFs, where they meet a new friend named Frankie. Together, they balance life, work, and the hilarious truths of motherhood (aka struggling to pump breastmilk in a public bathroom stall).

As mentioned, Seasons 1, 2, and 3 of Workin' Moms have already been produced, so there's definitely more of Reitman in your future. But when the episodes will be released globally on Netflix is so far unclear. Season 3 is currently airing on the CBC network in Canada, and future seasons will continue as a Netflix original, according to Reitman. Season 1 and Season 2 both contain 13 episodes, which means Season 3 is likely to end with the same amount. That's 39 episodes of Workin' Moms, guaranteed.

"I hope we can serve as a comedic battle cry for women experiencing change everywhere," Reitman said in a statement, per THR. So far, the show seems to be exceeding those hopes. Reitman stars in the show alongside Dani Kind, Juno Rinaldi, and Jessalyn Wanlim. She is the daughter of Hollywood director Ivan Reitman and co-produces the show with her husband, Philip Sternberg, also according to THR.

Reitman's father directed Stripes, Ghostbusters, and Kindergarten Cops, and this isn't her first rodeo, either. Along with Black-ish, she has appeared in It's Always Sunny in Philadelphia, Friends With Benefits, and Knocked Up, and she also directed and starred in the YouTube show Breakin' It Down With Catherine Reitman.

Reitman has publicly said on multiple occasions that Workin' Moms is inspired by her own trials and tribulations as a mother. She told CBC News that she likes "shows that are honest, that feel real, that aren't afraid to hide things." You only need to watch one episode of Workin' Moms to see how candid it is about what life is really like for moms. "Now that we watch it and we read the scripts," she said. "We feel the truth within it, and I hope the audience can too."

Reitman has been commended for her ability to capture this realism while also keeping things comedic. "Catherine's ability to reflect the complexity of being a working mother with great humor, poignancy and honesty is remarkable," Sally Catto, general manager, programming at CBC English Television said in a statement to THR.

Although the show's main focus is the nuances and sometimes undiscussed aspects of motherhood, it also sheds light on what it really means to be a flawed human, which everyone can relate to. That's certainly worth three seasons — and hopefully we'll get to see them sooner rather than later.