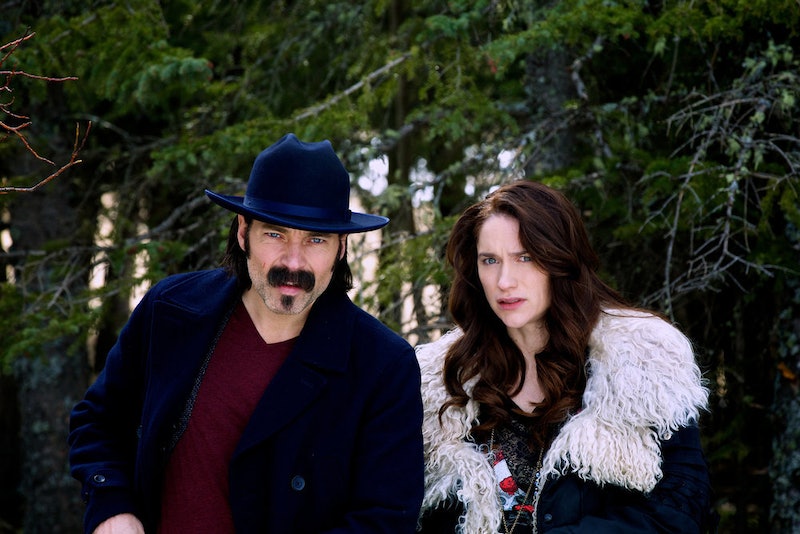 If you're looking for a fun, female hero to fall in love with this summer, then you should absolutely be watching SyFy's Wynonna Earp, which combines the setting of a space opera with the tropes of classic Hollywood Westerns. After the Season 2 finale wraps up on Aug. 25, fans will be waiting to find out when Wynonna Earp will return for Season 3. While the show is going to take a bit of a hiatus,Wynonna Earp's third season will be back for more Western-inspired sci-fi adventures. According to Entertainment Weekly, Wynonna Earp's 2017 Comic Con panel confirmed that the series will return for its third season. Like many science fiction properties, Wynonna Earp has a strong relationship with the San Diego festival, which has gone from simply a convention where fans can congregate, dress up, and buy comic books, to the place where huge film and television news often breaks. So, at this particular event, showrunner Emily Andras was able to confirm that the the series will return in 2018.

EARLIER: "We are so excited have this strong female-led, witty action series return for another season and deliver something special to our passionate fans around the world," Andras said in a statement, according to EW. The second season has done impressive things with just a few hour-long episodes, including giving Wynonna a whole pregnancy and birth storyline wherein she became pregnant with what could be a half-human, half-Revenant baby, and found out that her sister, Waverly Earp, might be one as well.

EW asked Andras what to expect from the villainous Ladies in Black in Season 3, and she said, "They’re definitely going to be around. I think we’re just starting to see the extent of their badness. They’re terrifying and determined." In Season 2, the Ladies were responsible for an alternate universe episode where a curse resulted in a Wynonna-free world, and Andras said in the season finale, "e have a lot of hanging threads that we are very excited to close off. You’re going to get answers on a lot of things you’ve been waiting to find out all season," including, possibly, the identity of Waverly's father and meeting Wynonna's baby. Andras also said, of the finale, "It is really emotionally taxing. I cried twice in the episode ... At the same time, we now have the privilege of kicking off the new story for season 3. It’s definitely one of my favorite episodes of the year. It’s crazy y’all."

With the privilege of knowing that Wynonna Earp will be returning in 2018, fans don't have to be too worried about any cliffhangers in that "crazy" season finale, but hopefully they'll get some resolution to the season's biggest storylines, like Wynonna's pregnancy and her relationship with her sister, so the Earp hero can continue her Peacemaking ways and be prepared to fight off the Ladies in Black in Season 3 next year.

More like this
Everything To Know About 'RHONY' Season 14
By Jake Viswanath, Alyssa Lapid and Brad Witter
The 'Freeridge' Cast Shared Their Hopes For A Potential Season 2
By Grace Wehniainen
'Succession' Season 4 Will Be An "Absolute Banger" According To Cousin Greg
By Bustle Staff
Everything To Know About A Potential 'Lockwood & Co.' Season 2
By Gretchen Smail
Get Even More From Bustle — Sign Up For The Newsletter
From hair trends to relationship advice, our daily newsletter has everything you need to sound like a person who’s on TikTok, even if you aren’t.