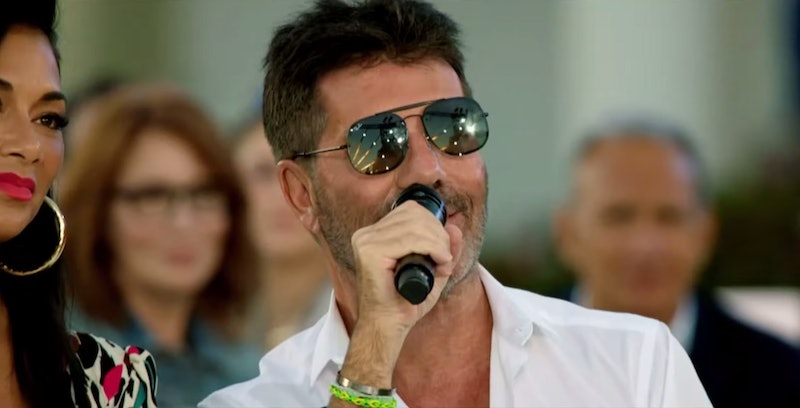 If you've been looking forward to the 16th series of The X Factor, I have some sad news for you — it ain't happening. Instead, ITV are gracing fans with a version of the show full of famous faces. But when does X Factor: Celebrity start, and which celebs will be taking to the stage to belt out some classic tunes?

After announcing the fifteen celebrities taking part in the talent show, ITV announced that X Factor: Celebrity would begin on Saturday, Oct. 12, 2019, at 8.35 p.m. on ITV One. So cancel all your Saturday night plans, because this is set to make TV history, with celebs going head to head to find out who's got a hidden musical talent.

Fans will be pleased to hear that the list of celebs taking part in X Factor: Celebrity are pretty epic. As BBC News reports, these are the stars lined up to appear on the series.

Even though the usual X Factor isn't running this year, ITV has given Simon Cowell, Nicole Scherzinger, and Louis Walsh the Love Island treatment, and are reportedly airing another version of the series right after Celebrity. This would be All Stars, which according to The Sun will "run back-to-back" with the Celebrity version.

According to judge Louis Walsh, All Stars will feature some of The X Factor's most beloved contestants. As he told the Mirror in July, this may include Leona Lewis, Alexandra Burke, and Shayne Ward. ITV has yet to announce All Stars officially, but Cowell pretty much confirmed it during an interview with The Sun. "I'm waiting for confirmation this week on some dates and clarification on [All Stars], but all we're trying to do is upgrade and glamorise the show," he said in February.

"Then next year the main X Factor show will change again and we've got something very, very exciting, that I can't get into yet, but it's a four year plan."

This article was originally published on Sep. 30, 2019