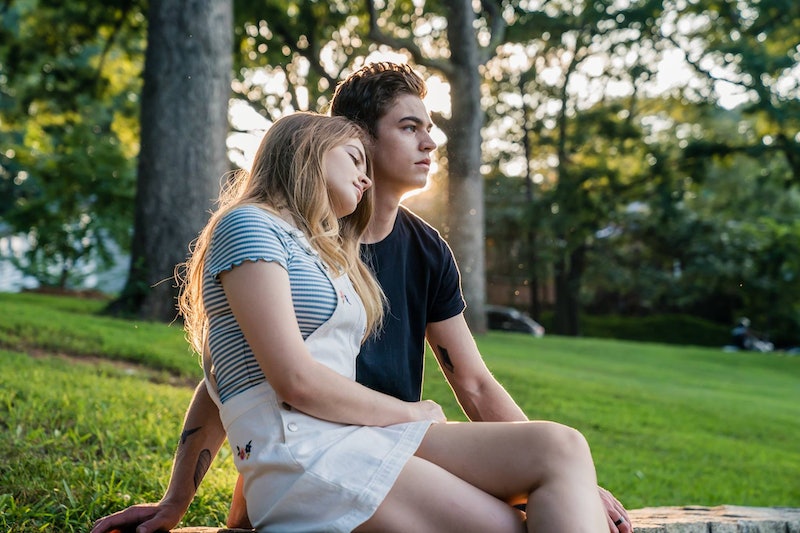 Forget Fifty Shades, there's a new franchise based on fan-fiction making its way to cinemas this month. Originally written as One Direction fanfic on Wattpad, Anna Todd's tale of romance became a best-selling book series and has since been adapted into a film that will be making its way to cinemas in less than two weeks. So when is After out in the UK, and how did a fanfic centred around Harry Styles become one of the most highly-anticipated films of 2019?

After being announced last summer, American fans only have to wait a short week or so to see After on the big screen, as it hits cinemas next Friday, April 12. A UK release date has yet to be confirmed, but Bustle have reached out to the film's UK distributor to see if a date is now set, and will update this post when we hear back. In the meantime, if you're not familiar with the romance between the two leads and feel as though you don't have the time to brush up on the five-book series, I've got you covered.

Directed by Jenny Gage, the story centres around girl-next-door Tessa Young (played by Josephine Langford) who is described in the film's synopsis as "a dedicated student, dutiful daughter and loyal girlfriend to her high school sweetheart." She's about to embark on a pretty important stage in her life — the daunting world of college. It's here she meets the "dark and mysterious" Hardin Scott (played by Hero Fiennes-Tiffin) who takes Josephine's guard down and "makes her question all she thought she knew about herself and what she wants out of life." Y'know, your typical YA romance.

From that description, you're probably wondering where the 1D fan-fiction fits in with all this. You see, according to Cosmopolitan, once Todd's fanfic became published the names had to be changed due to legal reasons, resulting in the character of Hardin Scott as opposed to Harry Styles. And to be clear, the Styles that Todd refers to in the fanfic isn't actually the real pop star. "He's definitely not Harry Styles. When people write fan fiction, 99 percent of us don't set out to write the actual character," she told Refinery29 in 2015. "It's an alternate universe where you take something you already love and turn it into something else."

In short, a love for all things One Direction is what led Todd to create this story, but it was also a way for the author to provide "mainstream erotica" aimed towards women, as E. L. James did with the Fifty Shades of Grey series. "It's a lot more important thaN people say. I always thought the U.S. was very forward in sexy things," she explained to Refinery29. "When we read sexy books, we're supposed to hide it. Especially younger girls, like 16, they're not supposed to be curious about sex. They're not supposed to want it."

"But the times when girls do get something sexy, the girl is always pleasing the guy. In After, Tessa gets pleased first every time. It's interesting: In Span and Brazil, After is a YA book. I get a lot of messages from girls — I would say probably like a thousand since this started — thanking me. [Before], we had to steal our moms' weird old romances with naked cowboys and stuff if we wanted to read about sex."