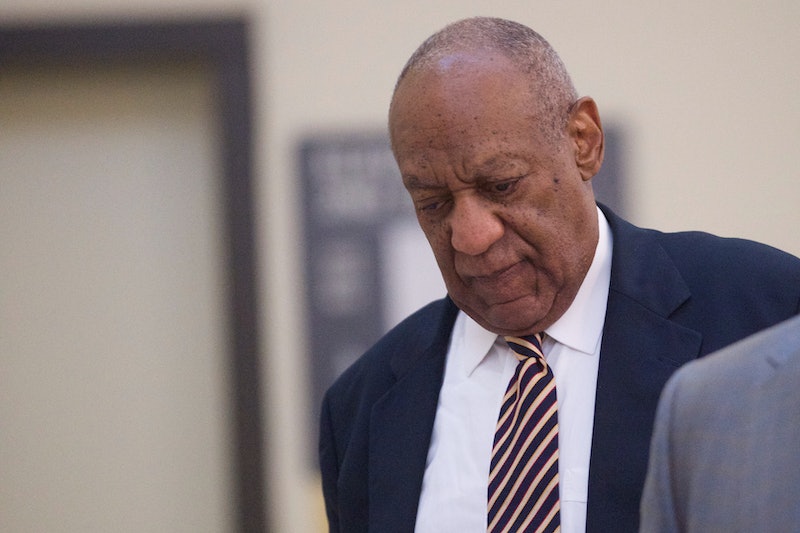 On Saturday, Bill Cosby's sexual assault trial ended with a deadlocked jury after days of deliberations. The failure of the jury to reach a verdict means that Cosby was neither convicted nor acquitted of the criminal charges, setting the stage for an eventual retrial. As for when the Cosby retrial will be, however, there's still some uncertainty at play, although there's at least a time-frame for when it'll be scheduled.

Cosby, 79, has been publicly accused of sexual assault by dozens of women, accusations he's repeatedly and flatly denied, and many of which fall outside the relevant statutes of limitations. He currently faces criminal charges brought by Andrea Constand, a former employee of Temple University who claims Cosby drugged and sexually assaulted her in 2004. In the immediate aftermath of the mistrial, the prosecution announced that it would bring the case against Cosby again, but the retrial doesn't have a concrete start date just yet.

But the scheduling process is now underway. According to reports, Judge Steve O’Neill is trying to schedule the new trial within 120 days ― in four months, in other words, which would mean the date would be finalized by mid-October. There's a good chance you'll hear when it's finalized, too, given the immense amount of attention the previous trial received.

Leading up to the mistrial, the jury deliberated for several days, and reportedly had to be urged into further deliberations by O'Neill, before it was finally clear that they could not agree on a unanimous verdict. In particular, according to reports, the jurors asked for the re-reading of testimony regarding Cosby's admission of having drugged women with Quaaludes ― with their knowledge, he claimed ― in a 2004 deposition.

There hasn't yet been any indication how many jurors supported Cosby's conviction compared to how many believed him not guilty, information that would help shine some light on whether the same case is likely to be successful when brought to trial again. All that's known, at the time of this writing, is that a consensus couldn't be reached, meaning it'll be up to another jury to decide.

The upcoming criminal retrial isn't the only potential legal jeopardy Cosby faces, although obviously criminal charges are by far the most serious. He also reportedly faces at least 10 civil lawsuits from among his dozens of accusers, some of which will be for alleged defamation rather than the sexual accusations themselves. In other words, although Cosby's attorneys had the distinct tone of a victorious team on Saturday, the final outcome is far from over.