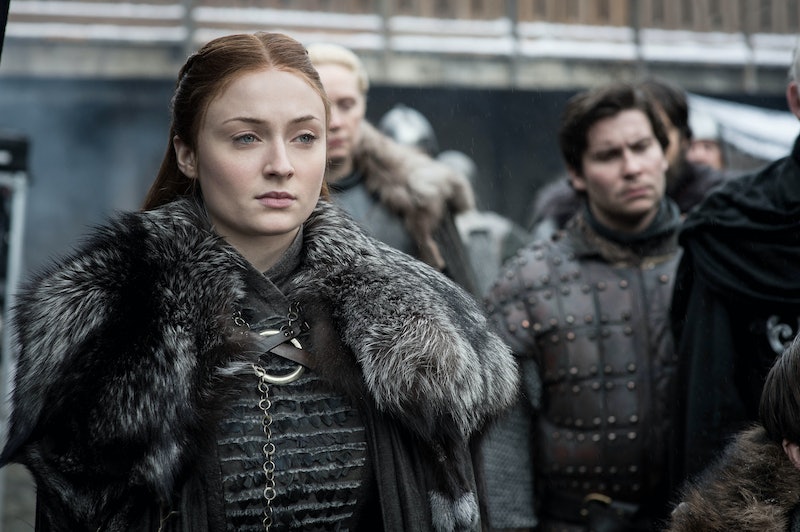 The eighth and final season of Game of Thrones may only consist of six episodes, but you better believe those episodes are going to be jam-packed with high stakes action that'll leave you on the edge of your seat. But while there are still multiple storylines to tie up, the biggest, most highly anticipated event has to be the fight for Westeros' very soul when the Night King marches on Winterfell. So when will the Battle of Winterfell take place on Game of Thrones? You're going to want to watch this episode live or else risk getting spoiled by the social media gods, both old and new.

As of now, HBO has yet to confirm when exactly this major battle between the living and the dead will happen. The episode titles could help clue us in on when it could be, but alas, the network is still keep those under wraps as well. That being said, there are a few hints out there to suggest that Episode 3 is the magic number we're looking for. First of all, it's listed as the longest episode of the season, which suggests that there's a lot of content to cover during this particular installment. And, according to Entertainment Weekly, the Battle of Winterfell will bring "the largest number of GoT major characters together since the show’s debut episode in 2011."

With so many characters to give proper screen time to, it would make sense for the battle to take place during the lengthiest episode.

Granted, it's important to keep in mind that this is pure speculation and has yet to be confirmed by HBO. However, adding further flames to the fire, director Miguel Sapochnik is credited for spear-heading two episodes of Season 8, one of which is Episode 3 and the other being Episode 5. Given that his previous contributions to the series include “Hardhome” and “Battle of the Bastards," it's safe to say that he'll be involved in this final battle as well. So we can at least narrow it down to one of those two episodes with his name on it.

Regardless, there should be little doubt in fans' minds that this battle will prove to be well worth the wait. It's all been leading up to this moment and even though there are bound to be many devastating casualties along the way, it's also going to be one of the most epic battles in television history.

In the same EW cover story for Game of Thrones, the outlet revealed that the episode involved 11 weeks of night shoots and freezing cold temperatures, which proved to be pretty draining on both the cast and crew. But in the end, it all came together for a must-see event. "It’s been exhausting but I think it will blow everybody away," co-executive producer Bryan Cogman told EW.

No Game of Thrones fan will be ready to say goodbye to this show for good, but at least when it goes out, we know it'll go out with a bang.