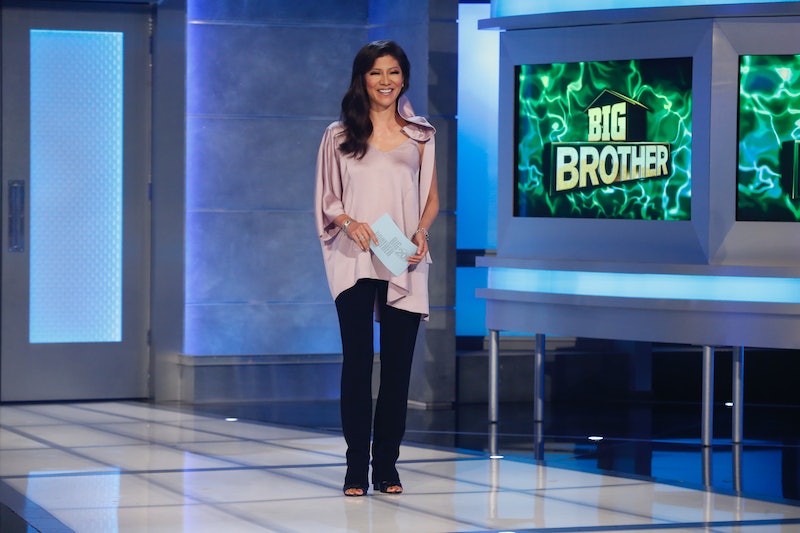 After almost a full 99 days of lockdown, the Big Brother 20 finale will air on Sept. 26, according to TV Guide. The extended hour and a half runtime ensures all the drama has enough space to be shown, but before the show wraps up, there's still a lot of action that needs to unfold. Here's what's still to come.

According to what host Julie Chen revealed during the Double Eviction episode, Wednesday, Sept. 19 will see either Sam or JC get evicted and a new head of household competition. The Thursday, Sept. 20 episode will then have the final veto, followed by a live eviction where four houseguests are whittled down to the final three. It's possible Thursday will also have a segment showing the Jury House arrivals of Scottie (again), Haleigh, Brett, and either Sam or JC.

From there, only one episode stands before finale night. Based on how last season unfolded, the Sunday, Sept. 23 episode will mostly be a clip show featuring the final three reminiscing about their summer. After that, Part 1 of the final Head of Household competition will begin. Whereas Season 19 had a two-hour finale, though, Season 20 only has a 90-minute finale, which could affect the episode's structure. Instead of just starting the HoH and finishing it on finale night, fans may get to see the whole thing play out on Sunday.

On finale night, Part 2 of the HoH will be shown. As with last season, fans will likely see a segment of the almost-fully-formed Jury discussing their thoughts on the final three contestants. Then, the winners of Part 1 and Part 2 of the HoH comps will face off in a live competition to determine the final HoH. That person will choose who they want as their Final 2 companion, the live vote will happen to crown a winner, and America's Favorite Houseguest will also be revealed. With that, another jam-packed 99 days will be over, and fans will have to wait another year for more summer shenanigans.

But don't fret about things ending quite yet. There are still four more episodes to go, and the competition is really heating up. All season long, Tyler has seemed like the player doing the most to win, but in recent weeks, Angela and Kaycee have stepped up as competition beasts. There's also Sam and JC, and while one of them will leave on Sept. 19, the other will stay. Sam has flown under the radar as someone who isn't much of a competitive threat, but considering she previously won an endurance HoH, Level Six should keep an eye on her. As for JC, his social game has allowed him to stay competitive even though he hasn't won anything. Does the Jury like him enough to pick him as the winner if he makes it to Final 2?

There are so many scenarios that, at this point, it's really anyone's game. The only way to know who wins is to tune in for the finale on Sept. 26 at 9:30 p.m. ET.