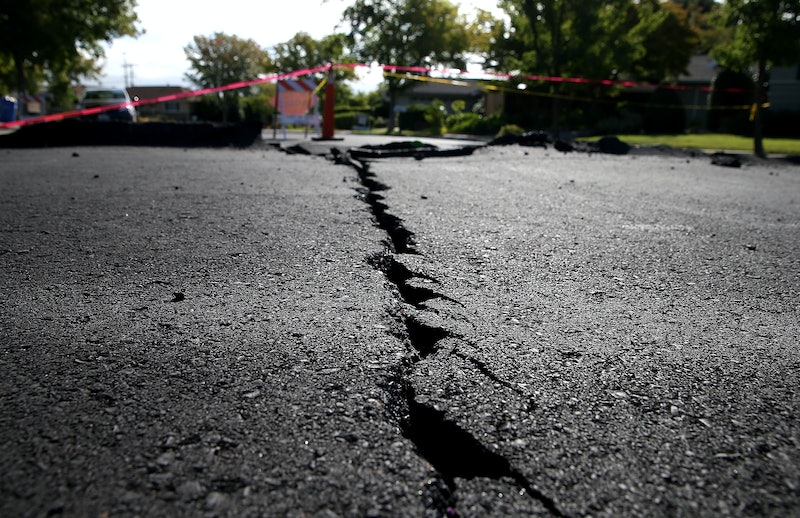 Californians are always being warned about the "big quake." But when this big earthquake is actually supposed to hit California has been a mystery and a debate among seismologists for decades. So when a 4.6 magnitude quake was detected on Monday Nov. 15, in California's Monterey County (four miles from the San Andreas fault line), followed by nine lesser aftershocks — known as an "earthquake swarm" — the states's anxiety was reawakened: is the big one coming now? And while no injuries or damages were reported, people felt the tremors more than 90 miles away in San Francisco, prompting some worries that the tectonic activity is only getting started.

The San Andreas fault line stretches across 750 miles of the state of California. Between 1906 and 1989, earthquakes along the San Andreas fault line caused catastrophic destruction and have taken the lives on thousands of people. In 2006, a Yuri Fialko's study from Scripps Institution of Oceanography at the University of California was published in the journal Nature: it predicted a massive earthquake along the San Andreas fault line within the next 20 years. The study showed that over time, the fault line was slightly predictable. Between 1857 and 1966, about every 22 years, an earthquake with a magnitude of at least 6.0 on the Richter magnitude scale has occurred along the fault line, and those quakes often occur after a series of smaller quakes are detected in the vicinity. Which is exactly why, after this "swarm" of quakes registered, it's leading to questions about whether it means the next big quake is due. According to Fialko, smaller plate activity essentially builds pressure and tension along the fault line, which eventually can lead to much larger and more impactful seismic activity.

And while there's no foolproof way to predict an earthquake before it's actually begun, scientists and seismologists are concerned after recent events. Researchers are now raising the risk and likelihood of a magnitude 8.0 earthquake or larger in the next 30 years from 4.7 percent to seven percent. Though that percentage might seem minimal, the upgraded risk is not nominal. It shows that the Monterey Counties quakes might actually be indicative of something substantial.

If you're wondering how you're supposed to process this information and prepare yourself, you're not alone. Back in 2014, California Governor Jerry Brown proposed putting millions of dollars into mapping the faults, after publicly declaring that there's "better than 50/50 chance that we'll have a catastrophic earthquake in California that will kill thousands of people and be enormously fiscally devastating." This, understandably, scared the crap out of everyone in the areas potentially endangered. Aside from having an emergency plan set up with your family or roommates, and having an emergency "Go Bag" packed (Vles Designs makes a excellent one) and ready to go, there isn't much Californians can do on their end. It's up to the state to track what the can, which is the location of the potential quake, and not the timing of it. Though we should rest assured that because FEMA and the state of California have been preparing for a major event for so long, there are emergency response plans in place that are said to go far and beyond any other U.S. natural disaster. From emergency officials, to soldiers, there will be an organized and thorough response, should anything catastrophic occur.

And while this information might shake people who live outside of California, as someone who spent nearly a decade living along the San Andreas fault line, I know just how unfazed Californians can be when it comes to earthquake scares. After you live through a dozen mini quakes and hear a dozen warnings about the "big one," it's hard to muster much of a response. But no matter where you live, you should have a plan for emergencies, for nothing if not peace of mind.

More like this
Why Experts Say Sleeping With A Fan On Isn’t Totally Risk-Free
By Sophie McEvoy
The 6 Best UV Umbrellas, According To A Dermatologist
By Rachael Green
The 8 Best Indoor Door Mats For Your Home
By Jenny White
Kim Kardashian Is Releasing A Line Of Earbuds With Beats
By Alexis Morillo
Get Even More From Bustle — Sign Up For The Newsletter