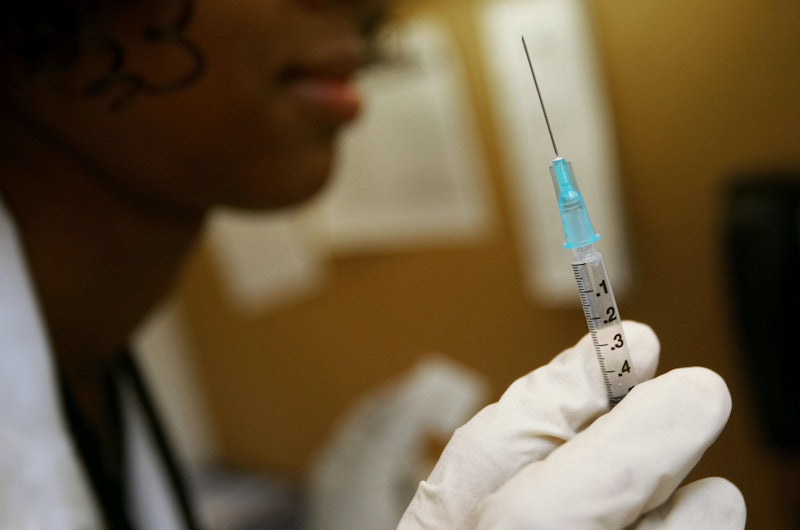 Your local pharmacy might already have promotions running for this season’s flu vaccine, but is it too early to get the flu shot? The Centers for Disease Control (CDC) recommends getting vaccinated by the end of October because that’s about when the flu usually starts spreading. But LiveScience says flu season is unpredictable, and doesn’t always start and end at the same time every year. Last season, for example, was a brutal flu season that lasted longer than expected and resulted in the highest child death count from the flu in the last five years, CNN reported. Not only is flu season not guaranteed to start in October, but the CDC says another factor to consider when timing your flu vaccination is that immunity takes about two weeks to build up in your system after you get vaccinated.

Dr. Amesh Adalja, infectious disease specialist and spokesperson for Theraflu, tells Bustle that there’s a shelf life to that immunity, so that means protecting yourself from the flu is all about timing your flu shot carefully. “The flu vaccine produces immunity that lasts only so long and diminishes throughout the season," Dr. Adalja tells Bustle. "If someone is vaccinated too early, the protection of the vaccine may wear off before the flu season has ended, leaving that person vulnerable."

That's why Dr. Adalja recommends getting the flu vaccine in mid-September to best time immunity. But Dr. Robert Segal, co-founder of Lab Finder, a website that helps connect patients to labs and imaging center, tells Bustle you should get the vaccine basically as soon as it's available "for better protection and to ensure that there is no shortage of access to the vaccine." According to Dr. Segal, there's no benefit to waiting to get vaccinated. "It is best to get the flu shot as soon as it becomes available to protect yourself and others as soon as possible."

Dr. Adalja tells Bustle that "getting the flu shot early is not dangerous, and if that is the only opportunity someone has to get the flu vaccine, they should get it early. However, later in the season, after their vaccine protection wanes, they may be at risk for contracting influenza."

That doesn’t mean you shouldn’t get the flu shot if you're able to, though. "The flu vaccine is the best protection we have against influenza," says Dr. Adalja. "There is no cure for the flu [...] so prevention through vaccination is a cornerstone for limiting the impact of influenza. The vaccine decreases the likelihood that you will contract the flu, and, if you get the flu despite vaccination, the flu you experience is less likely to be severe, require hospitalization, lead to pneumonia, or other complications."

And there are other ways to boost your immune system to help protect yourself from the flu, like eating fruits and vegetables, exercising, getting seven to nine hours of sleep, and maintaining healthy levels of stress, reports Medical News Today. And, of course, don’t forget the flu-prevention basics: wash your hands regularly, cover your coughs and sneezes, disinfect surfaces, and stay home if you’ve got a fever.

As summer comes to a close, it's time to start thinking about how to best protect yourself from those winter illnesses. Armed with information, you can make the best decision on when you think is the best time for you to get your flu shot.