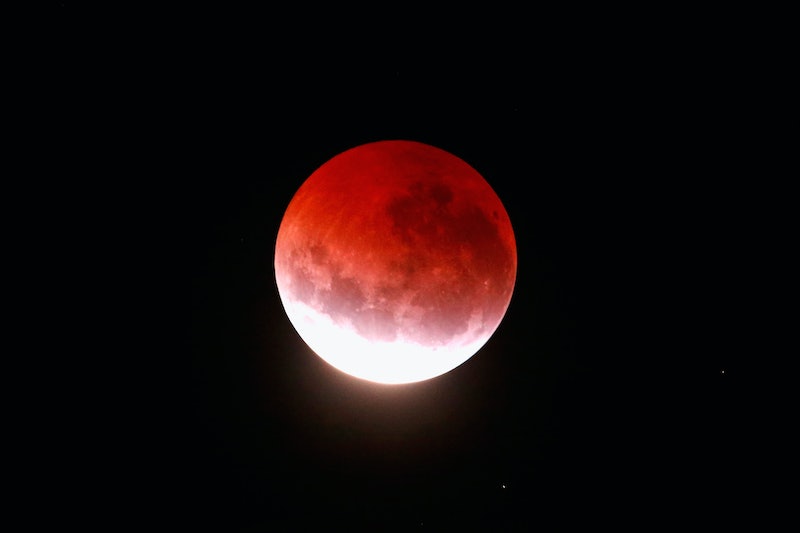 The summer of 2018 offers up a cornucopia of astrological activity. If you're wondering what's next, the blood moon 2018 happens July 27, and it will be the longest total lunar eclipse this century. This type of lunar eclipse is referred to as a blood moon because of the reddish hue that surrounds the moon, and historically, it's prompted conspiracy theorists to attribute it to the apocalypse, Express UK reported.

That's probably not going to happen, but these days it's never a bad idea to have some end-of-the-world supplies stashed away, which also come in handy during a natural disaster, or when you just need a bandaid. While the blood moon will bring the longest lunar eclipse this century, unfortunately you'll only be able to see it IRL if you're located in Asia, Australia, New Zealand, and much of Europe and Africa. Additionally, some parts of South America might be able to catch a glimpse of the eclipse, Newsweek noted.

The July 27 total lunar eclipse is so long because the "full moon and July lunar apogee — the moon’s most distant point from Earth in its monthly orbit — both fall on the same date," EarthSky explained on its website. "Therefore, the July 2018 full moon showcases the most distant and smallest full moon of the year."

If you've seen the movie Practical Magic starring Nicole Kidman and Sandra Bullock, then you might remember when the spell-casting sisters noticed the blood moon right before things started to get bringing-people-back-from-the-dead creepy. While a series of unfortunate events befell Sally and Gillian Owens in the movie, the blood moon, which is a supermoon total lunar eclipse, is actually nothing to be afraid of. In fact, blood moon total lunar eclipses happen about every 545 days, and it has yet to wipe out humankind.

When in doubt, turn to science, which can usually debunk any end-of-days theories. "The moon does not have any light of its own — it shines because its surface reflects sunlight. During a total lunar eclipse, the Earth moves between the sun and the moon and cuts off the moon's light supply," Time and Date explained on its website. "When this happens, the surface of the moon takes on a reddish glow instead of going completely dark."

This phenomena is called Rayleigh scattering, and there's actually no blood involved. "The condition of the Earth's atmosphere, including the amount of pollution and dust from storms and volcanic eruptions, can affect the shade of red the moon takes on during the eclipse," Time and Date noted.

Even though you won't be able to see the lunar eclipse from the U.S., you should still be able to see the full blood moon. Generally, a greater understanding of science has caused most people to abandon the notion that blood moons bring bad mojo. Though some people still relate disasters that coincide with blood moons as proof that the blood moon is prophetic, it's actually just a coincidence.

"Associations between ‘disastrous’ events and normal astronomical events are all fabrications of the human mind, as people attempt to find explanations for why disasters affect them," Jeff Gaherty, author of Four Blood Moons: Something is About to Change, is quoted from his book on the Old Farmers' Almanac website.

"Because of the internet and cable news channels, people now hear reports of disasters from around the world, including earthquakes, tsunamis and volcanic eruptions, which they never would have been aware of in the past." In the case of end-of-the-world prophecies, ignorance really is bliss.

Eclipses and blood moons happen regularly (a lunar eclipse can only occur during a full moon), and despite predictions that the end is near, the Earth keeps spinning just like always. If you want to watch the July 27 blood moon lunar eclipse, you can stream it on Time and Date from 1:14 to 7:28 p.m. ET. This way — whether or not the longest eclipse this century is the beginning of the end of the world — at least you can say you saw it.