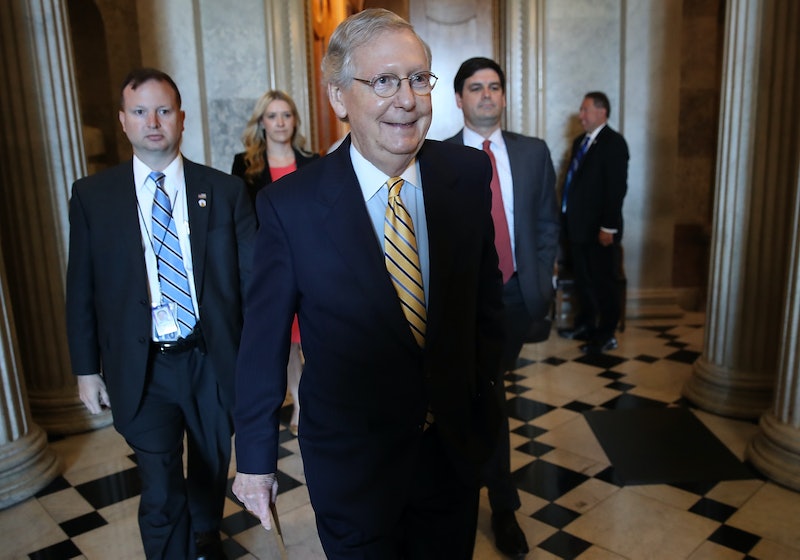 The day that millions of Americans feared has arrived. On Tuesday, the Senate narrowly voted to advance its health care bill, and the Republicans have positioned themselves one step closer to making good on their most consistent campaign promise, seven years in the making.

It was a dramatic vote, with two Republican senators, Susan Collins of Maine and Lisa Murkowski of Alaska, breaking with their party line and casting "no" votes. It was rumored that Republican Sen. Ron Johnson of Wisconsin might be a no, but he was the last senator to cast his vote in favor, immediately following Sen. John McCain's much-anticipated yes vote. McCain returned to Washington specifically to participate in the vote, only days after revealing he was diagnosed with a brain tumor. The 50-50 tie was broken by Vice President Mike Pence's vote in favor, clearing the path for the Senate to begin debate on a health care bill that would repeal and replace the Affordable Care Act.

But it's important to note that this doesn't mean that Obamacare has been repealed. Today's vote was simply the first step for Republicans to bring a bill to the floor. Senate leadership will now introduce it's version of a replacement bill, which will be debated before it would move to a vote. But as of now, there is little known for sure about what this replacement bill will contain.

The Senate will reportedly start by debating a 2015 version of a replacement bill, which is not expected to go very far. They will then move to considering the Senate's most current iteration, the Better Care Reconciliation Act, with the addition of two amendments, one which would grant access to purchasing catastrophic plans, and another that would provide $100 billion in additional spending for Medicaid.

The Senate's last-ditch effort would be to pass a "skinny" repeal, which would repeal certain provisions of Obamacare without offering a replacement bill. It would target the individual and employer mandate penalties and the tax on medical devices.

Senate leadership's biggest obstacle in passing any of these options will be that they not only will have to satisfy warring factions within their own party, with each edge of the spectrum having criticized the bill for going too far or not far enough, but they will likely have to draw Democrats to their side to get a replacement bill passed. While the Republicans do hold the majority in the Senate with 52 seats, the BCRA will reportedly need 60 votes to pass, because some provisions of the bill violate the Byrd Rule.

The Byrd Rule stops senators from inserting "extraneous matter" into bills that are meant to deal with budget matters. So if any parts of the bill deal with policy, it can not solely be passed by a simple majority, which is all that is required of budget-related legislation. Senate Republicans' plan was to get the health care bill passed as a budget reconciliation, so they would only need 51 votes to move forward.

However a few areas of the bill have been determined to be in violation of the Byrd Rule. The proposal to defund Planned Parenthood for a year, the prohibition of using federal subsidies to buy insurance that includes coverage for abortions, and the penalty that would require people who lapse in their coverage to wait six months before their new coverage could begin have all been identified as outside of the scope of a budgetary bill. So Republicans would instead need 60 votes to pass the bill in the Senate -- a number that would seem out of reach for Republicans on this issue.

The future remains murky for our health care system, and the next Senate vote has not yet been scheduled. But you can be sure that all eyes will be on these upcoming debates.