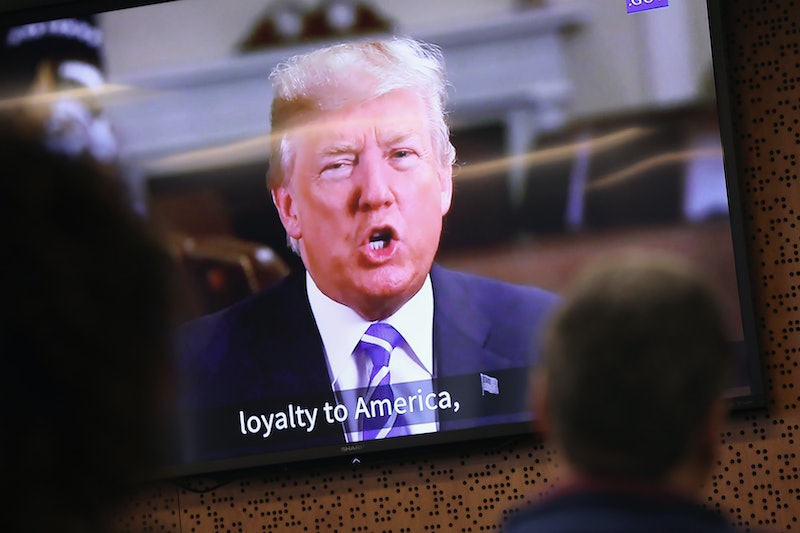 If you're interested in domestic affairs, you might be wondering when Donald Trump's State of the Union speech is. This is, after all, Trump's very first SOTU address, and it's arriving at a particularly tense moment in American politics. So, to answer you question: The address will take place on Jan. 30 at 9 p.m. ET.

The speech is scheduled to occur in the House chamber on Capitol Hill, where Trump will be joined by vice president Mike Pence among other prominent political figures. In addition to Pence, Trump will be addressing a crowd of prominent Senate and House representatives, along with judiciary members.

We are in the midst of a historic effort to provide relief to hardworking taxpayers, grow our economy, and rebuild our military for the 21st century. Looking ahead, the new year will bring an opportunity to take account of the progress we have made but also lay out the work that still remains to be done on behalf of the American people.

Ryan went on to say, "In that spirit, it is my honor to invite you to deliver your State of the Union address before a joint session of Congress on Tuesday, January 30, 2018 in the House Chamber."

Like Speaker Ryan said, the purpose of the SOTU address is to reflect on the political progress (or lack thereof) made on a national basis. It's like a meeting on reviewing annual profits, but with a political twist. Or, if you don't like business metaphors, a SOTU is supposed to be a reflective moment for the government. It's about looking at the recent past and offering direction on the future of the country.

Attendance for SOTU is not only critical, but also highlights what House and Senate members think of the president. For this particular administration under Trump, the SOTU address is taking place in a strained and contentious context. For starters, there are politicians who have expressed no desire to hear Trump's address. At least five House Democrats have said that they do not plan to attend the SOTU speech. Those political figures are Georgia Rep. John Lewis, California Rep. Maxine Waters, Washington Rep. Pramila Jayapal, Florida Rep. Frederica Wilson, and Oregon Rep. Earl Blumenauer.

One of the main reasons why these Democrats have decided not to attend the SOTU is because of Trump reportedly calling African nations, Haiti, and El Salvador "sh**hole" countries (Trump denies using the word "s**hole"). On Jan. 12, Waters released a statement explaining why there was a boycott

Donald Trump is a racist and indecent man with no good values who is woefully unfit and undeserving of the office in which he serves. That this president, a deeply flawed human being with no understanding of public policy, would make such ill-informed and deplorable comments about Haitians, Salvadorans, and immigrants from African countries, merely underscores everything we already know about him: he is a hopeless and ignorant bigot.

In addition to the boycott, there are those who plan on attending the SOTU address but with a necessary and sobering caveat. Some female Democrats have said that they will don black for the SOTU address in order to shed light on sexual harassment and abuse on Capitol Hill. The gesture is being led by California Rep. Jackie Speier, who said on Twitter that she was calling on "women and men, Democrats and Republicans - to wear black to this year's #SOTU in solidarity [with] survivors of sexual harassment [and] violence in Hollywood, politics, the military, academia, etc."

From a tentative boycott, a symbolic protest against sexual violence to — of course — a very recent government shutdown, Trump's SOTU is set in remarkably volatile politics.