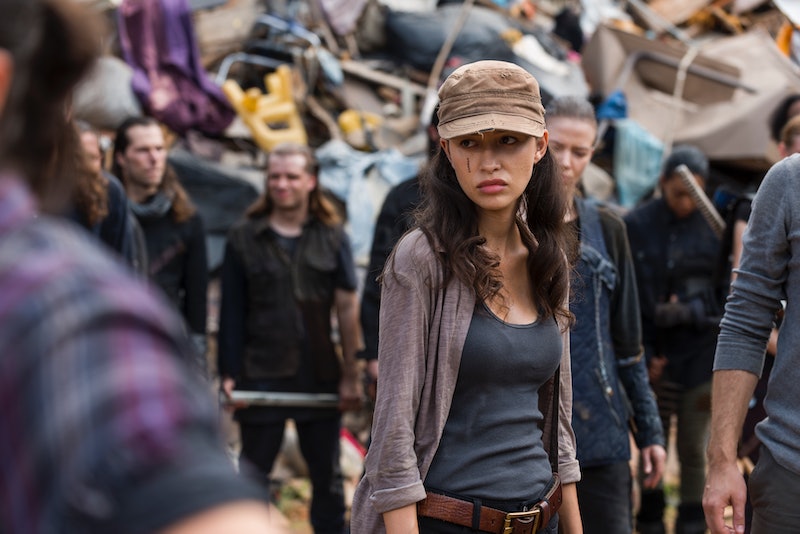 “There is one character that is going to go from one show that I will not name," Kirkman teased during the panel, "to another show that I will not name." He suggested that it might figure into a character's backstory through a flashback, or that one character could show up as a future version of another character, but did not confirm or give anything away. This also means that the crossover could occur at any time and on either series.

Why is this happening now? It seems that the producers and writers wanted to make sure that Fear stood on its own first, and wasn't riding too hard onto the original series' zombified coattails.

When will we see this special connection? Fans will likely have to wait a bit. The Walking Dead Season 8 premiere will be its 100th episode. While a lot of shows might use a celebratory event like that to plan a crossover, Saturday's panel seemed to imply that the 100th episode would be more about paying homage to the show's history and fans that have stuck around for eight years.

Still, we know who the characters are on both shows. There's nothing to stop fans from trying to figure this out. Here are some possible connections that could come to light in the future of either Walking Dead series.

At the panel, Talking Dead host and walker expert Chris Hardwick made a Back To The Future reference that, while funny, is a pretty good theory. His wish was that the crossover boil down to a phone call. "Daryl," he joked, "it's your cousin Madison Clark. You know that new sound you're looking for?"

Madison has a slight Southern accent, a lilt if you will, and seems like the most likely candidate for a crossover backstory. We just recently learned that Madison grew up in Alabama and killed her abusive father. Her father was a Senator, so it's not super likely that she is related to the mountain dwelling Dixons. Still, it's possible that she crossed paths with someone in the original series at some point. Maybe she knew Rick or Shane from their law enforcement days. A living character is most likely, but maybe she's related to Andrea.

If any character was going to physically make it from the West Coast to the East coast and figure into the future of The Walking Dead, it would be Madison's son Nick. Constantly in existential crisis, he's a survivor and a wanderer.

Another prime candidate is Strand, the enigmatic con man in Fear The Walking Dead. Maybe he used to do community theatre with King Ezekial back in the day. That's a flashback I'd like to see.

Another big Fear family that could have relatives in the American South is the recently introduced Otto group of survivalists.

While Katelyn Nacon didn't seem optimistic that her character's backstory would be explored in Season 8, that doesn't mean it can't be explored on the spin-off. It wouldn't be surprising if her family had a California connection.

Whether she's a warrior or a baker, but preferably both, this would be one of the characters fans would want to see cross over.

We already know that these two characters are not from Georgia, like many of the characters on the original series. They were traveling from Texas, not too far from California — and the timeline might actually line up perfectly. Fear The Walking Dead started at the beginning of the outbreak, a bit of time before Rick Grimes woke from his coma. Rosita and and Eugene didn't join The Walking Dead until Season 5. Time is difficult to measure in a post-apocalyptic landscape, but Rosita and Eugene might be just heading out on their adventure at this point in the spin-off.

Finally, the glimpse of Rick in a white beard that fans got a glimpse of in the San Diego Comic-Con could be a major clue as to when this crossover could happen, and what it may entail. If that scene is some kind of flash forward, maybe The Walking Dead is going to bring a character from Fear into that future. The show could feature an older Alicia, for example, or really any of the characters.

Hopefully this will happen soon. Having to wait for months and months after this tantalizing announcement would be cruel. Luckily, there are tons of possibilities and tons of opportunities for it to happen. We'll just have to keep our eyes out.