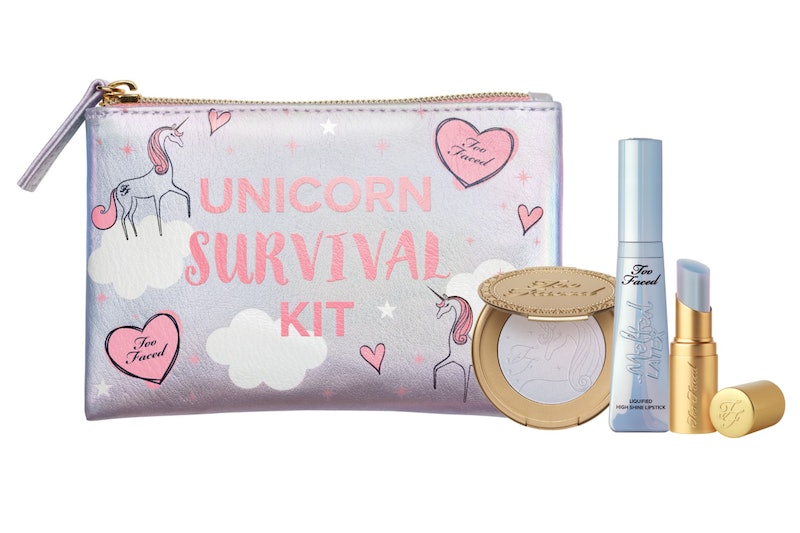 The unicorn beauty trend will not be fully overtaken by the mermaid beauty trend or that of any other mythical creatures with majestic horns or tails. Too Faced is launching a Unicorn Survival Kit as part of its 2017 Holiday Collection, according to PopSugar, which got an exclusive sneak peek.

The Unicorn Survival Kit arrives in September, which is usually when holiday sets start taking up space on retail shelves, be it physical or digital. It's never too early to get a head start on holiday shopping — for yourself or others.

Too Faced's seasonal sets are always particularly epic and the USK appears to follow in that time-honored tradition. Here's what's in it.

The Unicorn Survival Kit includes an iridescent, top-zip makeup bag that matches the brand's Unicorn Tears matte lipstick and Melted Latex liquid lippie. The kit appears to include the aforementioned lip products, as well as a unicorn highlighter that is blue in the pan but will likely lend an iridescent glow to the face or on whichever feature you swipe it. That's how the lipsticks function.

That said, check out the actual unicorn embossed on the actual product itself. It's almost too pretty to "ruin" by actually using the highlighter or by sweeping a fluffy brush over it.

In the event of some sort of makeupocalypse, this kit is all you need to look your dreamiest.

This is the full-sized Unicorn Tears lipstick. The Survival Kit version looks like a mini.

The lipstick is insanely gorj on any skin tone.

The liquid version is pretty ace and it's a little more daring.

All in all, it's magical makeup. Having both lippies, a bag, and a highlighter in one set is the stuff makeup dreams are made of.