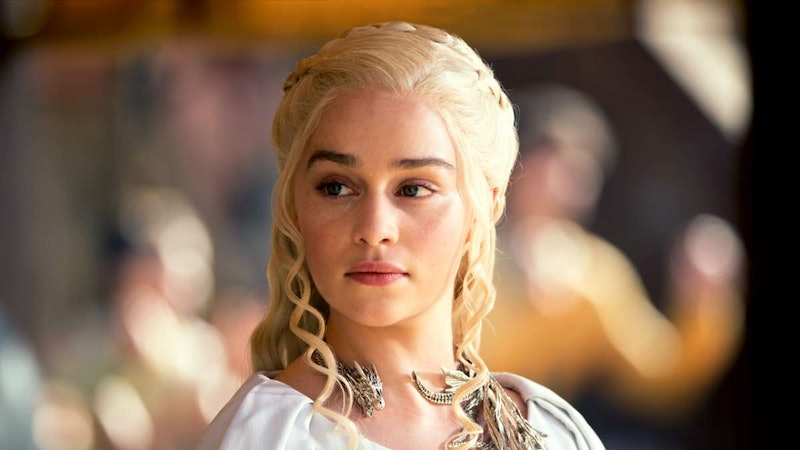 It's not everyday you see a major makeup brand partnering with a television show. A celebrity? Absolutely. A clothing brand? Sure. But a TV show? It's pretty much unheard of in beauty. Which is in part why Urban Decay's Game Of Thrones makeup collection is so epic and enthralling. Yep, the creators of the Naked palette have delved into the television world, announcing they are releasing a line with the beloved show. So, what do we know about the collection, what is in it, and when will it be available?

Well, I'll be honest, details are scarce at this stage. (Urban Decay, you teases!) The brand simply put out a short and sweet Instagram post, with what could be the name of the collection (For The Throne), along with the revelation that we will be able to get our hands on the makeup sometime in April. So, not a massive amount to go on yet.

Not much else was revealed in the press announcement email either, other than the information that we will hear more about the collection between now and April, when it is released. The statement simply read:

"We’ve partnered with HBO to create the Urban Decay | Game of Thrones collection, inspired by our favorite places in Westeros and the strong women of the Seven Kingdoms. We are excited for this partnership and look forward to sharing more details in the coming months."

The release of this makeup collection is set to coincide with the return of Game Of Thrones on our screens in April. The eighth and final series will consist of just six episodes, but is garnering huge excitement from fans all over the world.

The latest clip released by HBO indicates a seriously action packed final series, although an 'official' trailer is yet to be dropped.

Speaking about the upcoming episodes, HBO boss Richard Plepler told Variety he sees each as a movie in itself: “It’s a spectacle. The guys have done six movies. The reaction I had while watching them was, ‘I’m watching a movie.’

He continued, "They knew the bar was high. They’ve exceeded the bar. I’ve watched them twice without any CGI and I’m in awe. Everybody’s in for an extraordinary treat of storytelling and of magical, magical production.”

Sophie Turner, who plays Sansa, also spoke to the publication about how it felt knowing the scenes they were filming were the very last ones.

"When we all had the read-through for the final season, it was very, very emotional," she explained.

"For the first time in “Thrones” history, we had everyone there. All of the Americans wanted to come over. Every single cast member was pretty much there. We’re all kind of feeling the end of it coming. We’re all staying in town a little longer, going out for more meals, trying to get together more. We’re all trying not to take it for granted any more."

Roll on April for both the makeup and the movie-episodes.

More like this
'Stranger Things’ Natalia Dyer Has A Genius Hack For Taming Her Fringe
By Tomi Otekunrin
Yes, You Can Buy Off-White’s New Beauty Range In The UK
By Tomi Otekunrin
Glossier’s New Olivia Rodrigo Campaign Is Giving ‘90s Groovy Chick
By Tomi Otekunrin
I Have Eyebrow Alopecia – & Microblading Gave Me My Confidence Back
By Jessica Morgan
Get The Very Best Of Bustle/UK