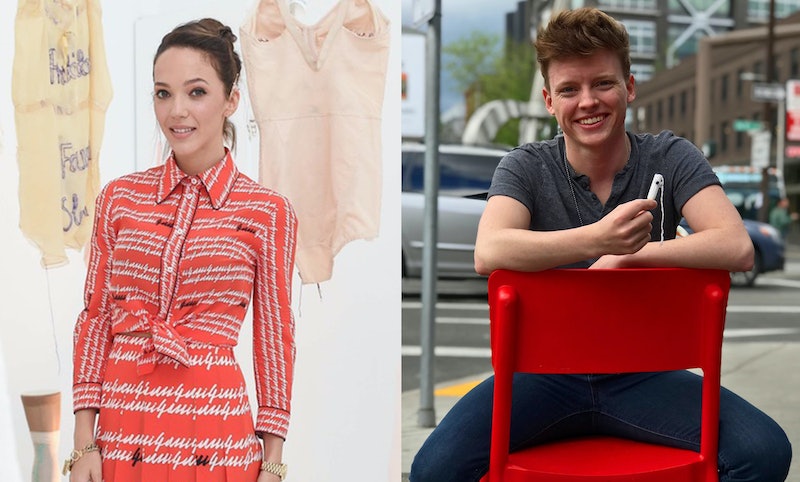 Cass Bliss is entirely un-boxable. Born in Haiti and raised in the Congo in a Baptist missionary community, they moved to the U.S. at age 18 to attend college. And by the age of 25, they have made an impact as a menstrual health activist, specifically in trans-inclusive period education. In an effort to introduce menstruation to younger audiences, Bliss aimed to break down taboos with coloring books. Along with fostering awareness, their efforts were also met with criticism, but that only led them on a journey of self-discovery into their own non-binary, trans identity.

Needless to say, Bliss is a major game changer, which is why they were named a 2018 Bustle Rule Breaker, along with activist and artist Zoë Buckman. Buckman’s artistry — ranging from sculpture, photography and installation— explores themes of feminism and equality. Her work is inspired by American politics of late, and is also inspired by domestic fear and the maternal experience. In conversation, the two discuss their beginnings and the rules they break without apology. Get to know Bliss and Buckman, and start charting your own fearless course.

Zoë Buckman: I'd be curious to hear how your upbringing has sort of informed your experience now living in the States, and your activism here.

Cass Bliss: Well, a lot of it was just because I never received any sex education. I didn't really understand what gender was, except from what I heard or saw in my classmates. We were very much informed by a lot of the American dress codes or cultural trends at the time. There was high femininity, and then very strict masculinity. Since I was a kid, I knew that I was different. I knew that I didn't want to be a woman, but I also didn't want to be a man. It took me a little bit longer to come out, which is a standard narrative for people that exist in the middle.

I didn't think that I was trans enough to be trans, and I didn't really hear the word trans until I was probably about 18 in college, and I really had a very narrow perspective of what that was. I didn't think that I had permission to live outside of the gender that I was assigned. I hung onto the charming tomboy much longer than I think anyone would have wanted me to. I think at a certain age, pushing against your gender roles become less cute and more threatening to people, especially as you go into puberty.

But I fell in love with feminism and the way that it challenges the norms. I ended up studying gender — I studied it in college and kind of went from zero to 100 in the work that I've been doing ever since in myself and in the world.

As a kid, it was a way of survival for me, breaking rules was a way that I could live and survive as a trans non-binary person in a world where I wasn't given that option. - Cass Bliss

ZB: Wow. That's beautiful. So one of my concerns with feminism as a movement is that it can be, or is perceived to be, quite isolating at times, or quite exclusive. Straight cisgender men can feel excluded from the movement; I know that trans women can. I know that trans men [can]. And so, my personal wish or goal is that we just become more intersectional and inclusive as a movement, because I think that is where we can really garner true strength and effect. How do you feel about the intersectional conversation in regards to feminism?

CB: I'm very much on board with what you're talking about, and I really do hesitate and struggle with the movement itself because of its exclusivity, because it's had a history of doing so and we can't just pretend that that history isn't there and that we're not continuously reinforcing the patterns of isolation.

ZB: When did you first start [your work as an] activist?

CB: I think that I have to continuously practice being an activist. But recently, I've hesitated to use it to define myself. It should be a sum of the actions that I take every day. But, I'm kind of a rebel, or a rule breaker if you will, since I was a kid. I think my dad said that I [would] just ask him, “Why?” constantly. As a kid, it was a way of survival for me, breaking rules was a way that I could live and survive as a trans non-binary person in a world where I wasn't given that option. And as I've gotten older, it's become more of an intentional practice. So, I think it's really just been a larger evolution of trying to find ways to challenge the normative privileged thinking, as well as the privileged thinking that I have in my own right.

I have a similar question for you: When did you want to become an artist or realize that you were invested in art?

ZB: I grew up in a very artistic family. My parents were both activists, but my mum was a member of the Communist party, and she was also an acting coach. And my family on my dad's side, they were also in the theater world, so I basically grew up in a theater family. But it was also one that was very much focused on art as social practice and social change. So for me, those two things were always linked. It wasn't something that I necessarily wanted to do, I didn't have a burning desire as a kid to be an artist. It just became obvious that that's what I was doing.

I definitely don't want to be a poster child or have a piece become a symbol for a movement. I think particularly because, A: movements are fleeting, and B: we don't have control over those movements. - Zoë Buckman

CB: As someone who creates such a wide variety of all sorts of different art pieces, I wonder if you feel like most people encapsulate you based on the more popular pieces they see like Champ?

ZB: Yeah it's a blessing and a curse. On the one hand, I do feel so lucky that [it] has touched so many different people in different ways. And I still receive emails from all over the world and from such a diverse smattering of human beings, feeling that that piece advocates or speaks for them, or to them, for so many different reasons. Reasons that I could never imagine that would be what I made it for. At the same time, I definitely don't want to be a poster child or have a piece become a symbol for a movement. I think particularly because, A.) movements are fleeting, and B.) we don't have control over those movements. So it is something that is quite complicated for me. And then I guess I get to a point with it really, where I just pull back the lens [and] go, Zoë, just make your work good. You just keep showing up, you just keep working on your artistic practice and growing in that way and keep making, and stay true to your voice.

I'd love to ask you the same about the coloring book — just brilliant, and so different and so funny, and so beautiful. Do you feel like you’re labeled in the menstrual conversation and that's a problem?

What it is that launched me into the national and then international conversation was a photo that I took in response to receiving hate on my coloring book. - Cass Bliss

CB: I think it's interesting you bring up the coloring book because I was just talking about that. It's not something that I am known for anymore. What it is that launched me into the national and then international conversation was a photo that I took in response to receiving hate on my coloring book. And I had never really received that kind of hate before, not in that way, and especially not on the internet from strangers. So that was really difficult to deal with. But instead of cowering down, I realized that I needed to come out to my audience and talk about my trans identity as more than just this theory, but as something that is actually impacting a real person.

But it is a blessing and a curse because everything that I do now, it is more than just period stuff. A lot of the work that I do is still around bleeding while trans and menstruating when you are a trans or non-binary person, but I also do so much more. I do a lot of descriptions around positioning and testosterone and the experience of being non-binary in a very binary world.

I've noticed that there's almost this expectation from the dominant class, for example, that they deserve to be educated by the oppressed. - Zoë Buckman

ZB: So you're damned if you do, and damned if you don't. I've noticed that there's almost this expectation from the dominant class, for example, that they deserve to be educated by the oppressed. And that just simply having curiosity means that you have that right. Google exists for free and it absolutely works.

Let me ask you: What's the adulting rule you break most often?

CB: The biggest adulting rule I break is just refusing to believe that there is a strict difference between being a kid and an adult. I think we're all kind of figuring it out. So, I strive to have as much fun and be as childish as I can. When I'm running, people in D.C. can see me dance around and jump off small objects. I like to sing outside and do things. I like to retain this as a faithfulness, but I think that maybe that rule is just refusing to believe that [being an] adult is a thing that I need to be forced into. What about you?

ZB: Yes. Controlled rebellion. Totally. So, I think the more sure of myself I've become in terms of my career, my achievements, the more I'm kind of doing away with that shit. That is a very liberating space to operate out of.