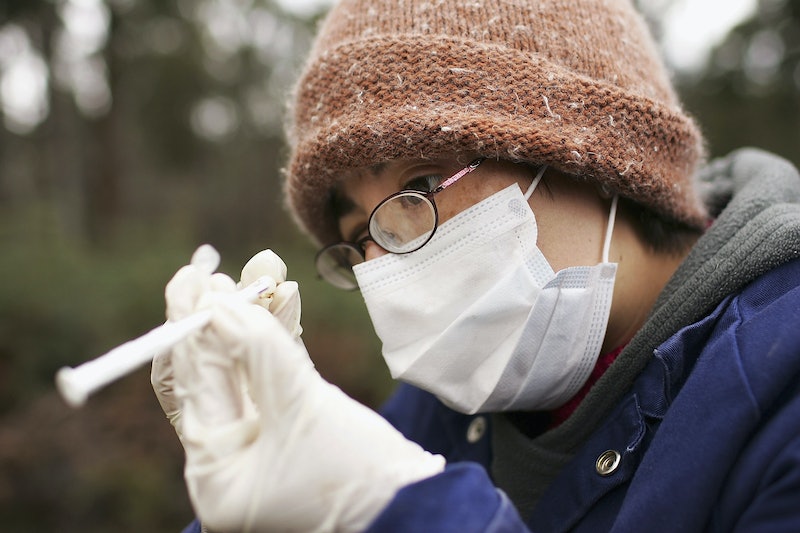 News flash: It's flu season — and statistically, some of you reading this have already caught the dreaded virus. As you languish on the couch like the heroine of a 19th century romance, surrounded by a small mountain range of used tissues, you may be wondering when you should go to the doctor if you have the flu. Should you drag your feverish, clammy butt to an urgent care or ride out the misery alone, so you don't infect the innocent public?

The good news is that while you might feel like you're knocking on death's door, most people recover from the flu within a week or two, with the worst symptoms (high fever, sore throat, and so on) subsiding after the first few unhappy days. According to the Mayo Clinic, the best treatment is usually simple bed rest and drinking plenty of fluids until the virus runs its course. In fact, the Centers for Disease Control (CDC) are pretty clear on whether your average, otherwise-healthy person should head to the doctor at the first sign of the flu:

"Most people with the flu have mild illness and do not need medical care or antiviral drugs. If you get sick with flu symptoms, in most cases, you should stay home and avoid contact with other people except to get medical care."

Basically, if you're experiencing run-of-the-mill flu symptoms like cough, fever, body aches, and fatigue, you're likely OK to stay home and rest — just make sure to monitor your symptoms, especially if you have a fever. The CDC also stresses the importance of going to the emergency room only in the event of an emergency. "The emergency room should be used for people who are very sick. You should not go to the emergency room if you are only mildly ill," the website states.

This prevents the spread of influenza, which is known for being incredibly contagious. Scientists believe that the virus is airborne, carried in the droplets people cast out into the world when they cough, sneeze, or even just talk. In fact, according to the CDC, people with the flu can infect other people standing six feet away. Unfortunately, the contagious period usually begins the day before symptoms develop and lasts up to a week after they get sick, so many people might not realize they're spreading their illness around. Consider this your reminder to wash your hands regularly, especially during flu season.

So if most people should stay home when they have the flu, how are you supposed to know when to head to the doctor? The answer depends on your past medical history, as well as the severity of your symptoms. Although most people recover from the flu on their own, certain groups are at a high risk for complications like bronchitis or pneumonia. According to the CDC, these groups include children younger than five years old, adults older than 65, pregnant women, and people in long-term care facilities like nursing homes. If you or a loved one fall into any of those categories, the CDC actually recommends contacting your doctor early on in the illness.

But people in low-risk groups aren't impervious to the flu. Harvard Health Publishing explains that the following symptoms are worth getting in touch with your medical provider:

The CDC has a similar list that also includes severe vomiting and confusion. It also notes that these symptoms may look different in children; instead, warning signs in kids may manifest as irritability, trouble breathing, bluish skin, fever with a rash, inability to wake up, not drinking enough fluids, or "flu-like symptoms improve but then return with fever and worse cough."

All this being said, it's always better to be safe than sorry. Currently, the flu season is in full swing, and the 2017-18 season has proven to be a doozy. According to CBS News, the flu has been widespread in every state except Hawaii for three straight weeks now. Alabama has declared a state of emergency over the flu outbreak, and a school district in Florida cancelled classes on Friday due to the virus. Nearly 12,000 flu-related hospitalizations were reported between October 1 and Jan. 20, according to CNN, making this season particularly fierce. If you're worried about your symptoms, it can't hurt to at least give your doctor a call. Meanwhile, don't forget to rest up.

For those who haven't gotten sick, there are ways to avoid catching the virus. Wash your hands thoroughly and often, avoid contact with sick people, and disinfect surfaces that might be contaminated. Most importantly, remember that it's never too late to get a flu shot. Shots are no fun, but you know what's worse? The flu.