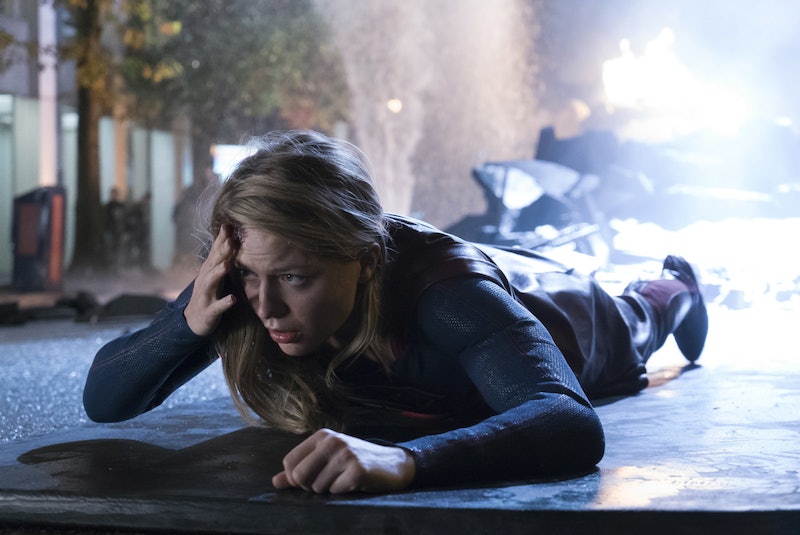 Supergirl will air its midseason finale Dec. 4 and, based on the official photos, it looks like Kara will be going head-to-head with Reign in that episode. But, while she’s faced huge threats before, Reign looks to be different than villains of seasons past. This begs the question: When Season 3 of Supergirl returns from hiatus, what will happen to Kara? If Supergirl and Reign’s meetup in the comics is any indication, Kara is going to need some help defeating her. According to TV Line, Supergirl will return to TV on Jan. 15, and it will likely continue the Reign villain story. She isn’t a new character created for the show, her origins stem from the comics — which gives insight to her show arc. Caution that comics spoilers and therefore potential series spoilers will follow.

In the comic books, she’s the leader of a number of living super-weapons called Worldkillers. After waking up from the destruction of Krypton, each of the Worldkillers only know their names and they yearned for a purpose in life. After wandering the galaxy, they discover Kryptonians on Earth (like Kara) and pursue her to get answers on why they were made and to what end. When Supergirl couldn’t answer Reign’s questions, that’s when the two first fought and Supergirl… was defeated. Photos of Episode 9 titled “Reign,” seem to show the series’ version of this initial fight, with Reign knocking down Supergirl.

While in the comics, Supergirl does eventually wake up and return to Earth in time to stop Reign and the other Worldkillers from conquering Earth, it seems that the show may be enlisting some help for the Kryptonian. After all, if fans learned one thing after watching the latest crossover, "The Crisis On Earth-X," they know that there’s safety in numbers. Not to mention we already have a confirmation of sorts from former Supergirl showrunner Andrew Kreisberg.

In an interview with TV Line from early November, Kreisberg confirmed that the first episode to air following the midseason finale would be titled: “The Legion of Super-Heroes.” A team that, in the comics, also included Saturn Girl and Brainiac 5, who will be played by Amy Jackson and Jesse Rath, respectively, according to Variety. “Episode 10 is called ‘Legion of Super-Heroes,’ and you can’t call it that without having the Legion of Super-Heroes in it,” Kreisberg said to TV Line. “We’ve hinted at the Legion going back to Season 1, when we saw the Legion ring in the Fortress of Solitude, so the Legion will have a presence … We feel that Reign is the best villain we’ve ever had — so it’s going to take all the allies that she can muster to take Reign down.”

While the forces of good will be teaming up, that leaves fans to wonder whether or not Reign will do the same? After all, she does lead three other Worldkillers — Perrilus, Deimax, and Flower of Heaven — in the comics. But, according to reign actor Odette Annable, she may be on her own. According to an interview with Entertainment Weekly from October, she wasn’t aware of other Worldkillers joining her. “Do I have a backup? No, that hasn’t come up. So far, it’s just me,” she said, adding, “It would be cool if I was fighting and had this epic showdown and all of a sudden my buddies came along to play.” Of course, a lot of filming has happened since October when the interview was published, perhaps the other Worldkillers could make an appearance when the show returns from hiatus.

But, “Reign” is just Episode 9 in a season that will probably have at least 20 episodes if it’s at all like Season 1 or Season 2. Clearly then, when the show returns from the midseason finale, Episode 10 will be just a first step in defeating who's shaping up to be Supergirl's strongest villain yet. But, if there is a lesson to be learned from the comics, it's the promise that despite Supergirl being knocked down by Reign, she will keep getting back up to fight. She will defend the Earth and her friends until her last breath.

Editor's Note: On Nov. 10, Variety reported that producer Andrew Kreisberg had been suspended after several allegations of sexual harassment and "inappropriate physical contact" by employees and former employees. On Nov. 29, Deadline reported that Kreisberg had been fired. Warner Bros. TV issued a statement on the matter saying, "After a thorough investigation, Warner Bros. Television Group has terminated Andrew Kreisberg’s employment, effective immediately. We remain committed to providing a safe working environment for our employees and everyone involved in our productions." Variety also reported that "Kreisberg strongly denies the allegations" made by the 19 sources mentioned in the article.