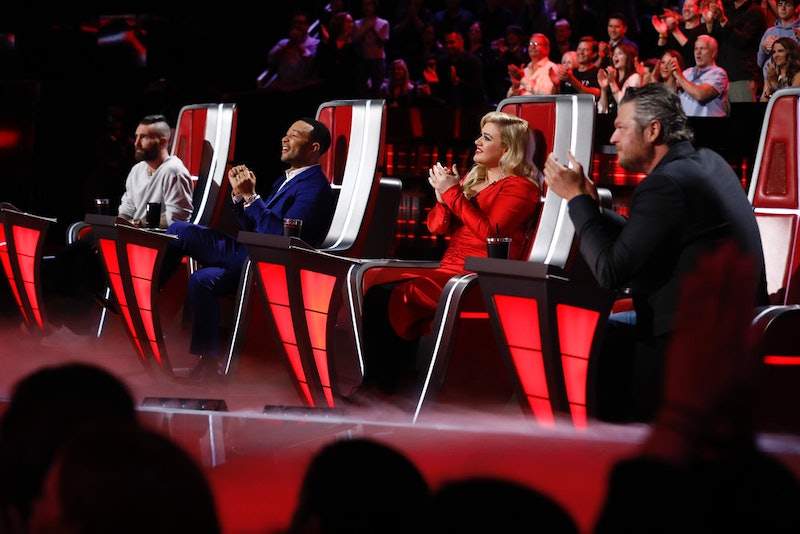 'Tis the season for everyone's favorite singing competition shows to come to a close. Thankfully, though, The Voice will return for Season 17, as will all four of its coaches— including the show's latest addition, John Legend. An official premiere date for the next season hasn't been announced, but based on the show's past schedule, it should be back this September. (Since Season 5, it's premiered in February and September of each year).

The judges announcement was made via NBC's official Twitter account on May 10. It included a picture of the four of them with the words "Back for More" edited over the top. "A group of Coaches so good we need an encore," the tweet read. "This iconic squad is returning to #TheVoice next season." A few judges have already come and gone —including Alicia Keys, Miley Cyrus, Pharrell Williams, Jennifer Hudson — so it's nice to know this group will be sticking around for a bit.

It shouldn't come as a surprise considering his incredible talent (he's one of 15 EGOT winners), but clearly, Legend has a knack for coaching: one of his team members, Maelyn Jarmon, made it to the Season 16 finale against Blake Shelton's three singers — Andrew Sevener, Gyth Rigdon, and Dexter Roberts — and Shelton is the reigning champ when it comes to picking winners for his team. Both Shelton and fellow coach Adam Levine have been on the show since it began in 2011. Season 17 will be Clarkson's fourth season as a full-time adviser.

The rest of the panel initially hazed Legend by blocking him from coaching his first choice contestants. But while he has some catching up to do, he's at least in on the joke. In an exclusive clip of the Season 16 finale from E! News, Legend sings the blocking blues as he steps off of a school bus and approaches the studio like he's the new kid at school.

"Brand new season, what do we do, is have some fun with the coach that's new," he sings. "I'm gettin' blocked around the clock ... could come from Adam, Kelly, or Blake. How much more can one coach take?"

A golf cart driver steals a studio parking spot clearly labeled with Legend's name — blocked. Blake and Adam block his backstage hoop shooting, and then, Legend's wife Chrissy Teigen swoops in for the ultimate block. "What's wrong?" she asks. "I don't know. Just everywhere I go, no matter what I do, I just keep getting blocked," he says. "Aw, is there anything I can do?" Teigen asks. Legend leans in for a kiss. "I just did my makeup, I'm sorry," she says, putting her hand to his face. Poor guy.

Bless Legend for being a good sport during his first season as a judge on The Voice. He's playing along only because he's confident that his future on the show is bright. Now that he has the basics mastered, he can really help his team shine next season.

More like this
The 'Love, Lizzo' Harry Styles Scene Is Just 1 Moment That Made Fans Feel Seen
By Brad Witter
Mariah Carey Is "So Proud" After Her Kids Joined Her In The Thanksgiving Day Parade
By Stephanie Topacio Long
Kim K Is Putting Kanye’s Memorabilia — Like Grammys & Clothes — In A Vault
By Jake Viswanath
Robert Brotherton's Boyfriend Ra'ed Saade Competed On Several Reality Shows
By Brad Witter
Get Even More From Bustle — Sign Up For The Newsletter