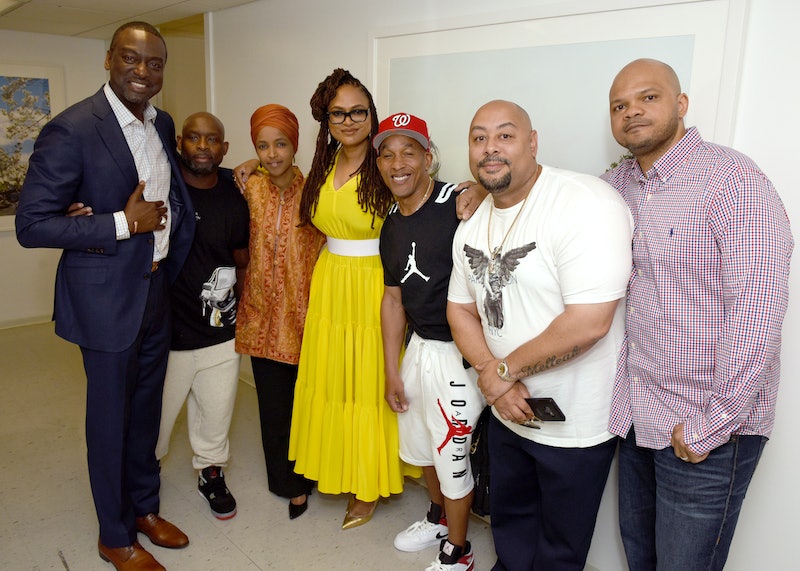 Ava DuVernay has been known to bring important Black stories to life in TV shows and films like Queen Sugar, Selma, August 28: A Day in the Life of a People, and 13th. Now, the director and screenwriter is delivering a new miniseries on May 31 about the horrors of a wrongful conviction. When They See Us is based on a true story about five Black and Latino teenagers from Harlem, Kevin Richardson, Yusef Salaam, Raymond Santana, Antron McCray, and Korey Wise, who were wrongfully accused and imprisoned for the rape of a White woman jogger in Central Park, per Deadline Hollywood.

According to ABC News, 28-year-old Trisha Meili was raped and nearly beaten to death in Central Park while going for a run on April 19. That same night, the boys, who were between the ages of 14 and 16 at the time, were brought in and questioned about unrelated assaults that took place in the park that same night. The authorities held them in custody for several hours until everyone except Salaam implicated themselves (and each other) on video in the attack despite no DNA nor physical evidence tying them to the crime scene.

Per a Guardian profile, the boys later claimed that they were all coerced into confessions and Salaam said he heard police physically assaulting Wise in the adjacent room. The case took on national attention prior to the trial, with then-businessman Donald Trump taking out a front-page news ad calling for the teenage boys to be executed and their personal information, including addresses, published for the world to see.

During the 1990 trial, the prosecution relied heavily on the boys’ confessions due to no other concrete evidence tying them to the crime. They were all found guilty with McCray, Santana, Richardson, and Salaam serving 5-10 years as juveniles and Wise, who was the oldest, sentenced to 5-15 years as an adult.

The same report stated that convicted serial rapist Matias Reyes confessed to committing the crime by himself in 2002 and DNA evidence supported his claim. The Central Park Five’s convictions were vacated and Wise, who was still in prison, was finally a free man.

According to Elle, they all spent 7 to 13 years incarcerated and New York City paid them a $41 million-dollar settlement in 2014. However Meili, whose injuries left her with no recollection of the attack, recently spoke to ABC News 20/20 and said that she wishes the case hadn’t been settled because she believed that there was more than one attacker. She also stated that she supported the work of law enforcement and the prosecutors who worked on her case, although she didn’t outright indicate that the men were guilty.

There have been several documentaries and television profiles about the Central Park jogger case, but DuVernay’s dramatization will give viewers a first-hand account of what happened to these teenagers and their families.

In the When They See Us trailer, Richardson asks for his mother while sitting in front of several White officers. They begin to question him about the other teens, whose names he doesn’t know, and asks about where he saw “the lady.” Investigators comb the crime scene and one female officer says that every Black male who was in the park that night is a suspect, so they need to bring all of them in for questioning.

The boys’ families begin to appear at the police station and everyone is either confused or horrified by the accusations. The clip continues with the boys being forcefully interrogated despite repeatedly denying any knowledge about the victim. Salaam’s mother insists on seeing her son and a heated trial begins with the prosecution claiming that the boys are guilty.

They are countered by the defense who points out the lack of evidence as well as protesters who believe the boys were being wrongfully accused of a heinous crime. The trailer ends by showing each boy as a grown man, presumably right before they are cleared of all convictions. It’s a heart-wrenching peek into a series that will make people further examine systemic abuses of power.

Duvernay spoke to Hollywood Reporter and revealed that the series was born from a tweet. Santana reached out to her in 2015 after watching Selma and asked if she would consider the Central Park Five as her next film project. The story resonated deeply with the filmmaker, who was also a high school student when the incident occurred, and they began to work together to bring this idea to life. DuVernay is no stranger to tackling tough material, but she admitted that this project was her biggest challenge yet.

“I would say that this was the hardest shoot I’ve ever done out of all of the films and television pieces that I’ve made because of the level of concentration that was required every single day,” said DuVernay. “The subject matter was intense. It’s five hours of really dynamic material dealing with issues that a lot of us don’t like to think about and sort of try to keep everyone, everyday focused. It was a challenge but it was a joy at the same time.”

When They See Us will allow Kevin, Yusef, Raymond, Antron, and Korey's unbelievably tragic true story to be examined from their perspective. And, with Ava DuVernay at the helm, it’s sure to bring impactful insight that will redefine how many people view this case.

More like this
Anthony Templet Wants To “Live Normally” After Killing His Father
By Brad Witter
Does The 'Echoes' Ending Mean There Will Be A Season 2?
By Kadin Burnett
Christine Quinn’s 'Selling Sunset' Future Is *Finally* Confirmed
By Bustle Staff
'Indian Matchmaking's First British Cast Member Knows *Exactly* What She Wants
By Shahed Ezaydi
Get Even More From Bustle — Sign Up For The Newsletter