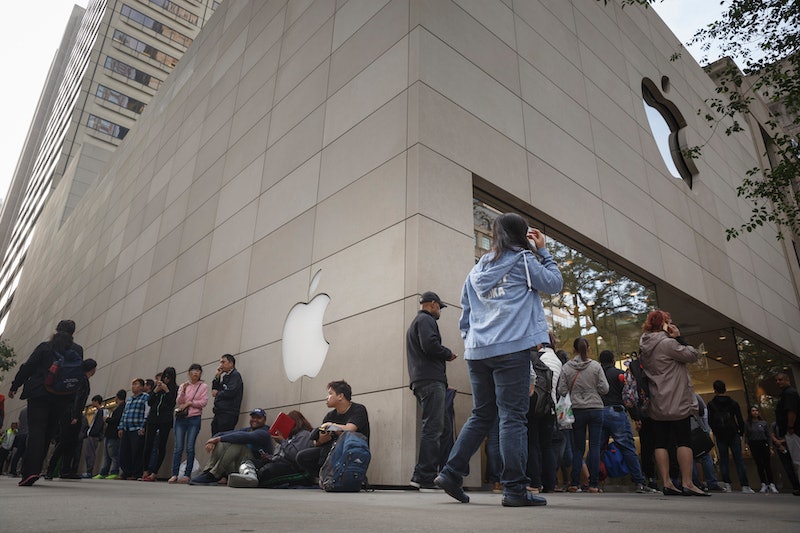 Sometimes it can feel like Apple is releasing a new product every month. No matter how new and advanced your iPhone 6 seemed when you bought it a few years ago, you're going to have to face a sad, hard truth come September: the iPhone 6 might become vintage. So for those wondering when to buy a new iPhone if you have an iPhone 6, you'll be happy to know there's more than one option — and it actually might benefit you to wait a little bit before you make that purchase.

To be clear, no one's going to take away your phone once the update comes out. Rather, the update will only be compatible for all models above the iPhone 6. So if you have the SE, the 6S, the 6S Plus, or any of the models that are even newer, you're in the clear. But if you're one of those people who somehow manages to keep the same phone for years on end and still has the 6 model (or the 5, or the 4...), then you're going to run into an issue.

Namely, you're no longer going to be able to download the upcoming iOS 13 software updates, according to USA Today. And while this might seem like a non-issue (doesn't everyone get a little antsy when they download a new update and see changes to their tech routine?), it's a problem for one major reason: You might be opening yourself up to security breaches if you don't download updates regularly. In fact, there were three security-related updates in the iOS 12 update, alone.

According to USA Today, the best time to remedy this issue and buy a new iPhone will be in the fall, right after Apple reveals its new products.

This is because Apple tends to decrease the price of other iPhones (like the 7, 8, and X) in the months after the latest phone has been released, for obvious reasons — they're getting closer and closer to being outdated. Given this reality, you might want to consider opting for an 8 over a 7, since the 7 will likely go the way of the 6 before the 8.

One option is waiting for the market price of an iPhone 8, for example, to drop in the months following the new model's release. You could also consider purchasing a used or refurbished phone from another retailer. For example, you could set an alert on eBay to notify you whenever an iPhone 8 (or other model) is available to purchase; as of July 29, the iPhone 8 Plus is available on eBay for around $450, which is a steal when compared to the store price of $700. But again — those prices will likely drop even further, too, when the value of that model potentially goes down in the fall. The bottom line is this: No matter where you get your next phone from, it'll likely cost less after the newest version comes out.

If you're not ready to buy a new phone this fall, you can always wait even longer. After all, your phone's not going to just turn off after the latest iOS software update comes out. And you can always use it for texts and calls even if your apps start to get a little glitchy.

But it's still worth keeping in mind that you will eventually have to get a new phone, sooner rather than later. Over time, with each software update that you miss, your phone will become increasingly susceptible to security breaches. It'll likely reveal other frustrating hiccups, too. You know that question mark in a box you receive in a text, sometimes? This means your phone won't show a new emoji until you download the latest update — it's just one of the many reasons why you should always download the new update.

So if you're ready for that shiny new updated iPhone, start planning for an autumn purchase. And keep an eye on the cost of iPhones during those fall months, and consider snapping one up when new models are released and the price of the old models goes down.