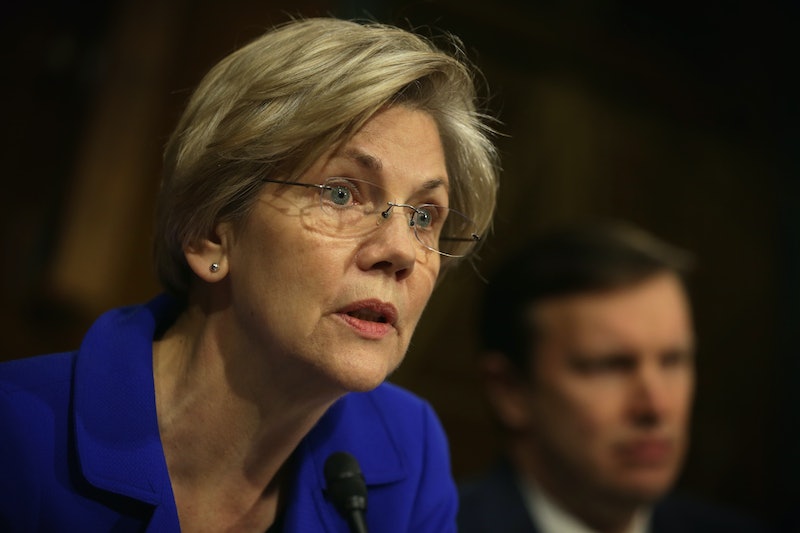 On Tuesday evening, Senate Republicans voted to "formally silence" Sen. Elizabeth Warren throughout the remainder of Sen. Jeff Sessions' confirmation hearing for the position of Attorney General. Majority Leader Mitch McConnell objected to Warren's reading of a letter from the late Coretta Scott King. This would be the same letter read without incident or challenge during Sessions' 1986 Senate hearing, after which he was denied confirmation as a federal judge. But yesterday, McConnell invoked Rule XIX, a procedural regulation that bars senators from suggesting "any conduct or motive unworthy or unbecoming a Senator” about their fellow colleagues. It's a rarely-used rule, written over a century ago in the aftermath of a senatorial feud between two South Carolinians.

Theirs was a fight that ended in a physical brawl on the Senate floor, something difficult to imagine today (partisan grandstanding and bickering notwithstanding). Benjamin R. Tillman had been a Democratic senator for the Palmetto State two years when his friend, John L. McLaurin, also won a Senate seat in 1896, joining Tillman in Washington, D.C. However, once in the capital, McLaurin seemed to drift away from his Democratic roots, buddying up to Northern Republicans in a move that Tillman found outrageous and unforgivable. During a 1902 Senate debate over whether or not to annex the Philippines, Tillman railed against his old pal McLaurin, accusing him of "treachery" and falling to "improper influences."

Someone felt the need to tell McLaurin what was going on, and the junior senator ran from his committee meeting to the Senate floor, confronting Tillman by declaring his accusations a "willful, malicious, and deliberate lie." Tillman pounced, literally, hitting McLaurin and setting off a brouhaha that ended with the Senate having to clear the floor. Both of South Carolina's senators were later found to be in contempt of Congress. Eventually, their fight led to the crafting of Rule XIX, which outlined a stricter guideline for proper speech from one senator about another.

But Rule XIX has hardly made a historic peep since then. Greg Giroux of Bloomberg noted that John Heinz, a Republican, invoked it back in 1979, after another Republican senator, Lowell Weicker, called him an "idiot" and "devious."

Otherwise, it seems Rule XIX is usually used as a tool for incentivizing senators to keep in line. As Amber Phillips points out at The Washington Post, it's a much simpler task to find examples of when the rule was probably broken than it is to discover a senator pulling the McConnell move from last night, and formally calling a vote to silence a colleague. She notes Sen. Tom Cotton describing former-Majority Leader Harry Reid's leadership as "cancerous," Cruz calling McConnell a "liar," Reid labeling Republican senators "puppets," and the above-mentioned snit between Heinz and Weicker. (No formal vote was ever called to "silence" Weicker, so Rule XIX was not carried out to its full conclusion.)

The shock expressed by Warren over her silencing is therefore understandable. It seems unlikely that anyone could have predicted a Rule XIX formal vote resulting from the simple reading of a letter already introduced to the Senate thirty years ago.