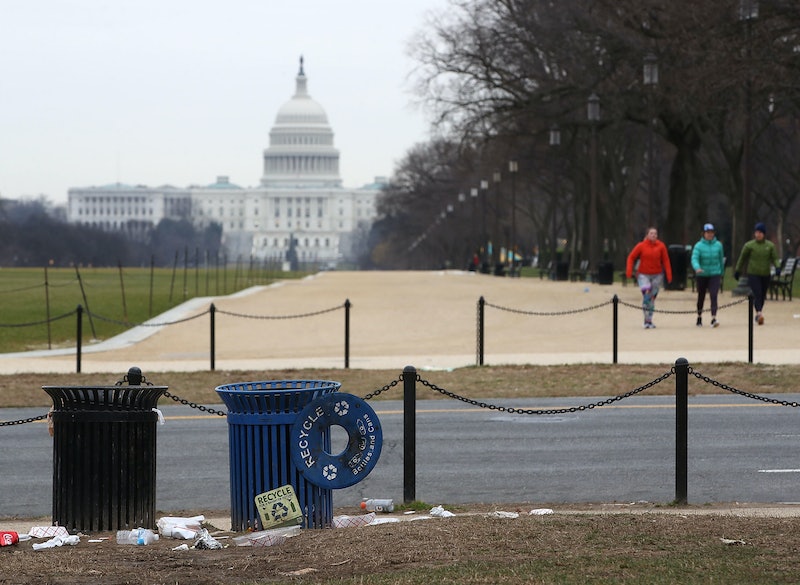 The federal government's partial shutdown is nearly at the two week mark, and it's still looking bleak for furloughed workers hoping to get paid soon. The question of when federal employees will get paid hinges on how quickly Congress passes a new funding bill, but according to CBS News, it's not going to be until Jan. 25 at the earliest.

A spokesperson for the American Federation of Government Employees (AFGE) told CBS that the current federal payroll period ends on Jan. 5. The automated system the government uses will take three to five days to start up again, the spokesperson said. And since each payroll period is two weeks long, even if Congress and the president approve a new funding bill by the end of this week, furloughed workers won't see a paycheck until Jan. 25.

In the meantime, federal workers are bracing for at least another few weeks without pay. "We had federal employees who were literally taking Christmas presents that were wrapped and ready to give, and taking them back to the store," National Federation of Federal Employees President Randy Erwin told CBS. "They were hunkering down for lean times."

Typically, people employed by the federal government receive retroactive compensation after a shutdown to make up for days they worked without pay. But that's not the case for contract workers like custodians, security guards, and foodservice personnel, reports ABC News.

Contract workers have historically worked some of the lowest paid jobs in government, according to The Washington Post. But past efforts to include backpay for contract workers in funding bills to reopen the government — like after the 2013 shutdown — have failed. The nation's largest property service union, 32BJ SEIU, counts some 2,000 building maintenance workers among its members who are currently affected by this shutdown.

These are "men and women who cannot afford an interruption in their modest pay," union president Héctor Figueroa said in a statement.

"In essence, Republicans are holding thousands of immigrant workers hostage in order to fund a wall to terrorize immigrants," he added. "It is a cowardly disgrace."

To make up for lost wages, ABC reports, contract workers are taking work elsewhere and picking up extra shifts. "I'm just trying to take one day at a time honestly," Julie Burr, an administrative assistant at the Kansas Department of Transportation, told ABC, adding that she was working extra shifts at a side job at Barnes and Noble. "I keep turning on the news and think maybe today's the day something will happen."

As the furlough drags on, unions like AFGE are taking it upon themselves to fight for workers' wages. Last week AFGE filed a class action lawsuit on behalf of federal employees working without pay. “Our members put their lives on the line to keep our country safe,” said J. David Cox Sr., union president, said in a statement. "Requiring them to work without pay is nothing short of inhumane."

Congress faces an uphill battle over the next few weeks to pass a funding bill. A newly Democratic House already has two bills ready to go, but since they don't include funding for the Trump's proposed border wall, it is very unlikely that they will pass through the Republican Senate, let alone onto the White House.