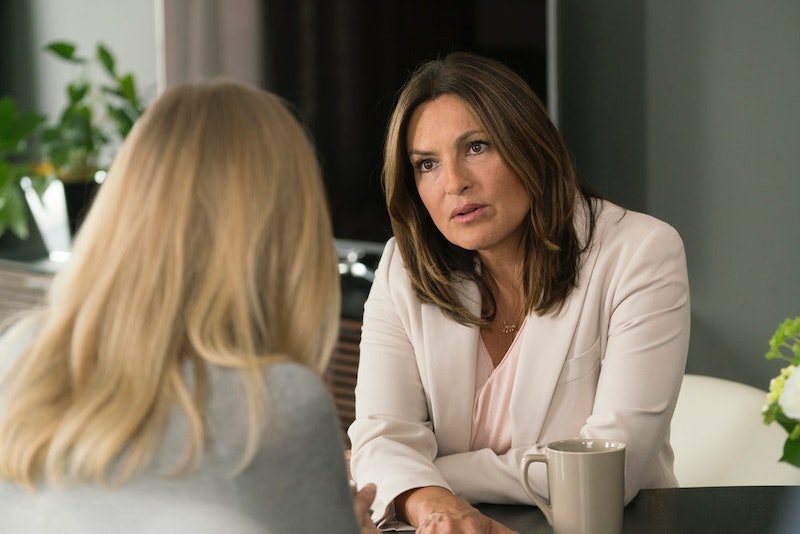 Few things are as constant in this world as Law & Order. The franchise has been a TV staple for nearly three decades now, and though its most popular version is taking a break for the holidays, it’s not going anywhere any time soon. It’s almost a given that Law & Order: SVU will come back to finish out Season 20 in early January. As documented on IMDb, the series has almost always returned within the first week of the new year, and for a few seasons, within the second week at the latest. So rest assured, the hiatus won't be long.

As for its long-term future, things still look pretty good for Special Victims Unit. The show hasn’t been officially renewed for Season 21, but according to TVSeriesFinale.com, it’s actually grown "in terms of average total viewers, and remained a top five show."

The New York Times also reported earlier this week that basically anything Law & Order creator Dick Wolf lays his hands turns into a gold mine. The outlet deemed him a "broadcast savior" who execs are turning to in the hopes of salvaging network TV viewership. The Times said that SVU "continues to deliver consistent results," and that Wolf’s five current dramas are "among the 21 highest-rated shows on network television."

So essentially, if you’re a Law & Order: SVU die-hard, you’ve probably got nothing to worry about for a long time. In fact, some are saying that the series may go on indefinitely. "I don't see any reason why this show will end," showrunner Michael Chernuchin told TV Guide in May. "[We're going to continue] until Mariska [Hargitay] says, 'let's end it,' because we're dealing with things that are on the front page in the papers every day. Now, more than ever."

Chernuchin said in the same interview that he hasn't even given any thought to what an ending might look like for the series. "No, I have not," he said when asked if he'd considered the show's endgame. "If we start to get a whiff of the network saying this is the last year, then we'll dig our heels in and think about it. But until then, I don't really see a reason to think about it. I don't see the show going away."

Hargitay, one of the series’ main stars, told E! News that she does have an ideal ending in mind for her character, and that she’s made Wolf aware of it, but won’t divulge it to anyone else for the time being. Fellow SVU star Ice-T, meanwhile, said the show is almost like "therapy" for some people because of the poignant and emotional storylines it broaches.

"I was not aware of that when I got on the show. I was in two years before people started saying, 'Thank you, Ice.' 'Thank you for what?' 'Thank you for the show?'" he told E! "I'm like, who says that about a television show? They say 'I like the movie,' but they won't say thank you. That's when I realized the show has another layer that is healing for a lot of people."

It’s hard to imagine an NBC lineup completely devoid of Law & Order: SVU content, but luckily for us, we don’t have to. Despite the break it’s taking after this week’s episode, there’s plenty more content coming down the pike.

More like this
Netflix Shut Down 'Bridgerton' S3 Rumours About A “Very Dark” Storyline
By Bustle
The 'New Amsterdam' Series Finale Opens An “Unexpected” Door To The Future
By Brad Witter
Everything To Know About 'Cobra Kai' Season 6
By Brad Witter
The 'Gossip Girl' Reboot Creator Is “Looking For A New Home” To Air A Potential Season 3
By Brad Witter
Get Even More From Bustle — Sign Up For The Newsletter
From hair trends to relationship advice, our daily newsletter has everything you need to sound like a person who’s on TikTok, even if you aren’t.

This article was originally published on November 29, 2018