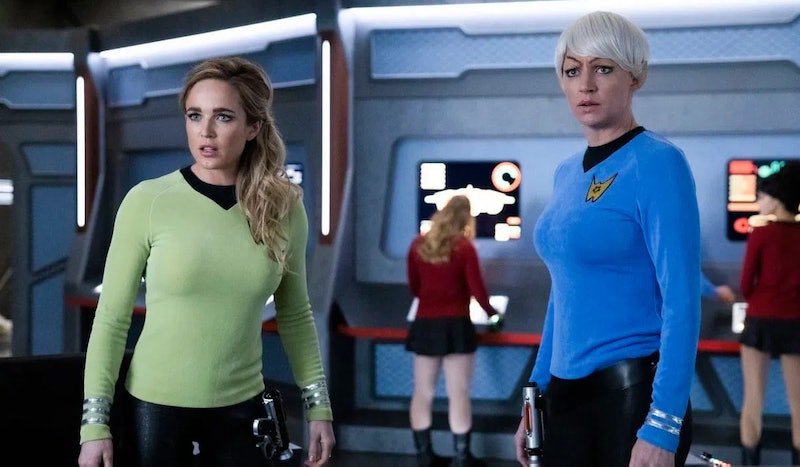 Legends of Tomorrow — The DC universe inspired series airing on the CW — has proven to be a hit for the network. Season 5 followed the resurrection of several evil historical figures and maintained steady ratings. Now, with Season 5's finale nearly upon us fans are wondering, will Legends of Tomorrow return for Season 6?

The CW started the new year by setting many fans' minds at ease. In January 2020 the channel announced the renewal of 13 shows. And along with the likes of Riverdale and Charmed, Legends of Tomorrow also got the go-ahead for another season. According to a CW press release, Season 6 is set to premiere in spring 2021 if all goes according to plan.

The show follows a ragtag team of time traveling "Legends", a crew consisting of lesser-known DC universe characters like Hawkgirl and Heat Wave, as well demon-hunting detective John Constantine and shapeshifter Charlie. The Legends have fought Rasputin, been to hell, and gone to prom. So what could possibly be in store for Season 6?

According to TVLine, the CW shared in a press release that Season 5 will consist of the Waverider co-captains Sara Lance and Ava Sharpe, "[facing] something even more challenging and bizarre [than previous adventures]. Space aliens! After one of their own is abducted by a ruthless alien, this new mission becomes personal." The release also teased a mysterious new character the Legends will have to track down: "A woman who was abducted by aliens when she was a child and supposedly imbued with powers that will help the team defeat their intergalactic foes. Either that or she’s just crazy…"

But for fans who didn't sign on for more time in outer space, Legends producer and director Marc Guggenheim revealed to Collider there's a writers' room list of historical figures and time periods Legends still hasn't gotten around to. "Every year, we tick some of them off. There are still a whole host of time periods on the show’s bucket list, and it wouldn’t surprise me, at all, to visit at least one of them next season."

More like this
Netflix Shut Down 'Bridgerton' S3 Rumours About A “Very Dark” Storyline
By Bustle
Everything To Know About 'RHONY' Season 14
By Jake Viswanath, Alyssa Lapid and Brad Witter
'The Queen’s Gambit' Season 2 Tweet Wasn’t From Anya Taylor-Joy
By Mary Kate McGrath, Jack Irvin and Grace Wehniainen
'RHOSLC' Star Jen Shah Refuses To Do A Post-Sentencing Interview With Andy Cohen
By Brad Witter and Jake Viswanath
Get Even More From Bustle — Sign Up For The Newsletter
From hair trends to relationship advice, our daily newsletter has everything you need to sound like a person who’s on TikTok, even if you aren’t.