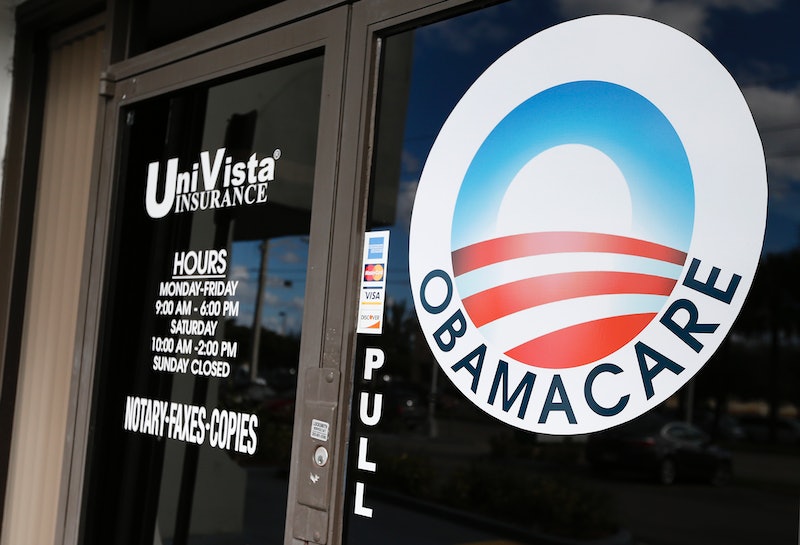 The U.S. Senate voted 51 to 48 on Jan. 12 to begin work on repealing Obamacare, and the House's vote is coming up shortly. It would seem that the Affordable Care Act is in serious trouble if Republicans continue to vote along party lines. This is leading those covered under the piece of healthcare legislation to wonder when Obamacare coverage will end if the repeal efforts succeed.

Well, it's complicated. Even if the House also votes to approve the resolution, it will likely still be some time before the ACA is actually repealed. Strangely enough, President-elect Donald Trump has said that the switch from Obamacare to an alternative healthcare law "will be essentially simultaneous; the same day or the same week," the Washington Post reported. "We’re going to have a health care that is far less expensive and far better," Trump said, according to the New York Times. But Republicans haven't actually provided an alternative plan that is cheaper and better, though Trump has said on multiple occasions that a new healthcare plan would continue to cover people with pre-existing conditions. Still, if Obamacare is repealed without an adequate replacement, then millions of people would likely lose the healthcare coverage they gained under the ACA.

During a Jan. 12 CNN town hall, House Speaker Paul Ryan didn't have a timeline for when Obamacare would be repealed. "I don't have a date, but that's something we're working on right now, and it's going to take us a little bit of time but we're working on this as fast as possible," he said vaguely. Other Congressional Republicans, including Sen. Majority Leader Mitch McConnell, have also not specified when the ACA would be repealed and replaced — only that it must be repealed as soon as possible.

"The law is collapsing, and so we've got to rescue people," Ryan said on CNN. It's true that Obamacare has a few issues, such as reduced choice in plans and sometimes expensive premiums. But the ACA isn't "collapsing" or in a "death spiral," as Republicans have said. "It’s not a failure in that 20 million people or more have insurance that didn’t used to have insurance. Everything else, it’s too early to judge," economist Gail Wilensky, who ran Medicare under former President George H.W. Bush, told CBS.

Up until now, many young Americans likely figured they would be covered by their parents' plans until they turned 26. But now, with the future of Obamacare at risk, it's unclear how long young people will have to establish themselves before they are forced to find their own health insurance. For those who would not have coverage without Obamacare, this uncertainty is dangerous.