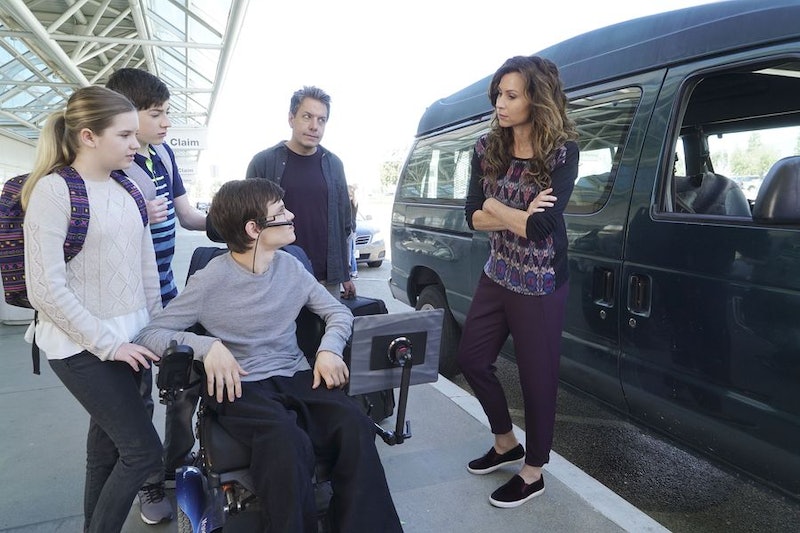 Good news for advocates of increased visibility for disabled characters on TV and comedy fans: the ABC freshman comedy Speechless will return for Season 2, according to Deadline. Unfortunately, that doesn't change the mechanics of television distribution. Deadline also reports that Speechless will return in fall 2017, meaning it will be off the air for at least a few months. But it's still great news. The series was a welcome addition to ABC's family sitcom lineup, and helped to broaden representation in a direction many don't think about — not only does the series include several characters with disabilities played by disabled actors, the rest of the DiMeos consider and care about JJ, and giving him both a literal voice through Kenneth, and constantly show that he's a valued and loved part of the family.

UPDATE: On July 25, ABC announced that Speechless will return for Season 2 on Sept. 27.

EARLIER: It's surely as revolutionary as having two of primetime's only Asian-American families on Dr. Ken (cancelled for 2017-2018) and Fresh Off the Boat (officially returning). ABC has become a network to look for funny and inclusive sitcoms. But with so many different ways to watch TV, there are plenty of other options to check out while Speechless and the rest are on hiatus. Your summer vacation will be filled with new comedies — here's just a few to choose from.

You may not have jumped into this series yet, but this comedy about a baseball announcer played by Hank Azaria is a unique comic creation.

If you're looking for another unconventional family show that's honest about the way parents deal with the stress of the world, this three-season, 12-episode series manages to fit in both the highs of falling in love and the lows of crying on the toilet about a family member's death.

Another Amazon series, this one is about a woman who forms an angry, sexual obsession with an artist who teaches at the same school as her husband. And while that doesn't exactly scream similarities with Speechless, both shows have an incredible female character and performance at their center: Minnie Driver is killing it in Speechless, and Kathryn Hahn is holding it down both comedically and with the experimental dramatic elements of I Love Dick.

The third season of this comedy may totally change the circumstances of the characters, but no matter what happens, it will be jam-packed with more jokes than most comedies could manage in an entire run.

ABC is giving this comedy a late spring premiere. It certainly has an odd premise: it's a a rom-com about a woman and her dog. But it's worth a shot, if only because Fargo's Alison Tolman deserves a starring role.

Netflix's newest ensemble comedy is about the history of the "Gorgeous Ladies of Wrestling," an all-women league of combo actor and athletes who find both success and an empowerment in the league.

And, of course, the summer will close out with a new season of this beloved comedy starring Abbi Jacobson and Ilana Glazer as forever besties.

By the time these summer shows end, it will practically be fall and time for Speechless and the rest of ABC's regular season comedies to come back.