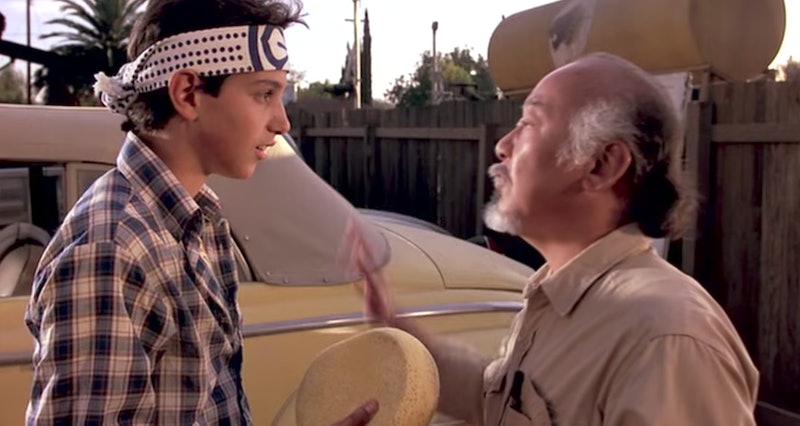 1984 was a heck of a long time ago, so it's hard to believe actors Ralph Macchio and William Zabka are returning to reprise their original roles in the TV sequel to the film The Karate Kid. But they officially are, which means the next question is: When will The Karate Kid TV sequel premiere?

If you’re all sorts of confused about how a sequel to the movie could possibly take place given the stars’ ages (the Karate Kid actor is now 55, while Zabka, who played his bully, Johnny, is now 51), it’s worth noting the new series titled Cobra Kai will be set in 30 years after the 1984 All Valley Karate Tournament and will center on Johnny reopening the Cobra Kai dojo and inadvertently fueling his old feud with Daniel again. Sounds like televisual gold, right?

Thankfully, it doesn’t sound like it’s going to be too long a wait for the YouTube Red series. According to The Hollywood Reporter, which first broke the news, it’s “set to bow in 2018.”

Obviously, while sometime in 2018 could be pretty soon, it's not exactly immediate. So what should you do to pass the time meanwhile? Well, given that it's a sequel to the original movie, it would make sense to give the 1984 original a rewatch. This time, however, try and give both Daniel and Johnny equal amounts of attention, since the key difference between the original movie and the TV sequel is that, according to what YouTube global head of originals Susanne Daniels told THR, "If The Karate Kid was Daniel’s story, Cobra Kai is equal parts Daniel and Johnny’s story."

And if you're really getting impatient about waiting for the sequel series to the movie that gave you the timeless advice to "Wax on, wax off," you could be an incredibly dutiful fan and also rewatch the '80s sequel movies to the original, The Karate Kid: Part II, in which Daniel accompanied his mentor back to Okinawa in Japan and The Karate Kid: Part III, in which Cobra Kai instructor John Kreese seeks revenge on Daniel and Miyagi after losing all his students. And if you're a glutton for punishment, you could even check out the critically-panned The Next Karate Kid (starring Hilary Swank as the lead) or even the 2010 Jaden Smith-fronted movie, The Karate Kid.

So sure, there's no shortage of Karate Kid material out there to ease your waiting pain. But apply a healthy amount of skepticism — as Mr. Miyagi once said, "Trust [the] quality of what you know, not [the] quantity." And after all, you wouldn't want to be Karate Kid-ed out before the new sequel drops.