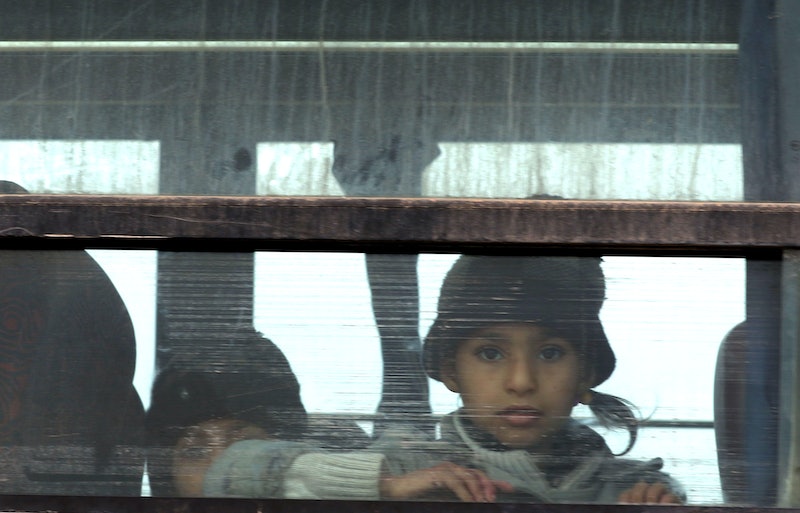 Donald Trump is making swift work of his Islamophobic and xenophobic campaign promises during his first week in office, to the detriment of thousands of people trying to leave dangerous and unstable countries. News broke Tuesday that Trump was expected to sign an executive order banning all travelers, including refugees, from several countries with links to terrorism. Trump's Muslim travel ban could go into effect immediately, meaning the thousands of vulnerable people the United States usually accepts will be left with one less option.

Because Trump is using executive action to put the ban into effect, it could, and likely will, be effective as soon as he finishes signing the document. Executive orders give presidents the power to drastically change policy without the approval of Congress, but he's also not going to get much fight on the issue from the Republican-controlled legislature anyway. Trump could do almost anything he wants when it comes to immigration reform right now, which seems to mean discriminating against an entire group of people/area of the world just for the actions of a few.

And the term "Muslim" travel ban is actually a misnomer, because it doesn't even matter if the person seeking to enter the country actually practices Islam.

The ban applies to seven countries that has had ties to terrorism: Iran, Iraq, Libya, Somalia, Sudan, Syria, and Yemen. It doesn't provide any exceptions for people who aren't Muslim. Peaceful Muslims and people of all other faiths will be left without the chance to find a better life or education in the United States just because of the country they come from. The ban is expected to be temporary and will supposedly be lifted when the immigration process is overhauled and made "safer," but that indeterminate time in the future could be too late for tens of thousands of refugees.

The slight silver lining is that only people with visas will be affected, so citizens and legal residents will still be allowed to enter and reenter the country. That's a dim light of hope, but it's something to hold on to for the millions of immigrants who will still be able to visit their home countries.

Yet they may face danger in the U.S. as well, since a wave of anti-Islamic sentiment has become increasingly violent in recent years. In the United States, hate crimes against Muslims rose 67 percent in just one year, making 2015 the worst year for attacks on Muslims since 2001.