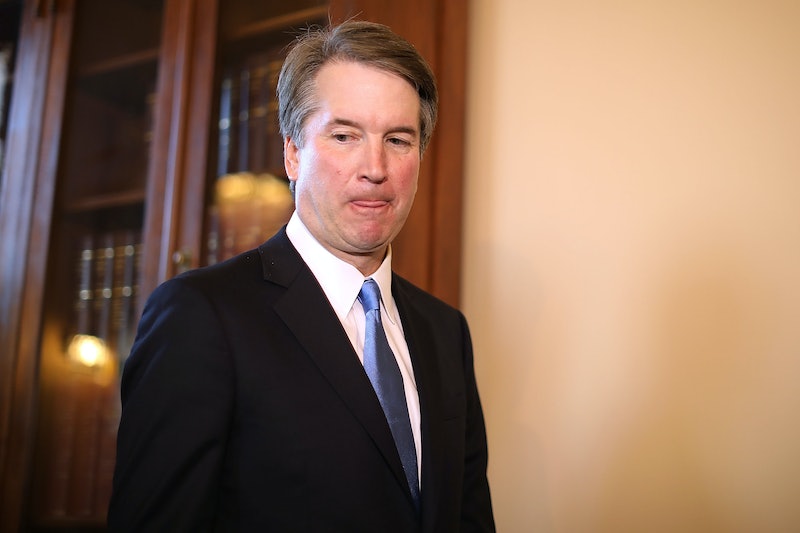 It's expected to be an extremely contentious — and highly politicized —process. When the Senate will try to confirm Brett Kavanaugh to the Supreme Court in the months to come, all eyes will be on Democrats and Republicans as they deliberate what to do with Trump's second SCOTUS nominee.

As of mid-July, no confirmation hearing date has been formally scheduled. However, Sen. Mitch McConnell has said he expects to have Kavanaugh confirmed by Oct. 1, when the court's new term is scheduled to begin.

"I think we will succeed, yes," he said at a news conference last Friday, according to CNN.

Before he can be confirmed, Kavanaugh will have to undergo a vetting process, which is run through the Senate Judiciary Committee. The Georgetown Law Library says that acquiring the background documents needed for the hearing can take about a month alone. According to The San Diego Union Tribune, the hearing process itself can last either days or weeks. This is because there is much to discuss, particularly regarding Kavanaugh (or any nominee's) record and how they approach the law. When they are done hearing from both Kavanaugh and his witnesses, the committee will vote and send a recommendation on up to the Senate.

After the Judiciary Committee is through grilling Kavanaugh and determines their recommendation, its members will be charged with setting a date and time for the larger hearing, which takes place before the entire upper chamber. From there, the entire Senate will debate Kavanaugh's merits, as well as any unresolved issues. The debate will continue until at least 51 members vote to close the conversation, after which they will vote on whether or not to confirm him.

Because the process itself is rather lengthy, it's difficult to know exactly when the Senate will reach the final vote. This is compounded by the controversial nature of Kavanaugh's nomination. Many Democrats don't believe that a confirmation vote should happen until after the 2018 midterm elections take place in November.

While that's not typically the stance either party would take, many Democrats are still agitated over the fact that Republicans refused to hold a confirmation vote for Judge Merrick Garland, President Obama's last Supreme Court nominee. Republicans' logic, at the time, was that the confirmation needed to wait until after the presidential election that took place that year, so that the next president voters selected would be the person choosing a nominee.

Though this worked in their favor then, Republicans are now arguing that the logic only applied to a presidential election year, and that a midterm year is very different situation. Some Democrats and left-leaning citizenry would like to stall Kavanaugh's confirmation process as a sort of tit-for-tat.

According to the Associated Press, Kavanaugh has already begun meeting with top lawmakers on Capitol Hill, including Sen. McConnell, as well as Vice President Mike Pence. Though many expect that Kavanaugh will ultimately be confirmed, it's expected to be a prolonged process, and it's not clear whether McConnell's Oct. 1 goal is realistic.

As it stands, at least two Republican senators are considered to be relative wildcards. Sens. Susan Collins of Maine and Lisa Murkowski of Alaska are much more supportive of abortion access than most of their Republican peers, and Kavanaugh's murky reputation on protecting access could very well become a sticking point. However, his stance isn't extremely clear, because as is the case for most judges, Kavanaugh has never explicitly shared whether or not he believes that Roe v. Wade should be upheld.

As the Senate Judiciary Committee prepares for Kavanaugh's hearing, much of the confirmation process is a wait-and-see. It's not clear whether Democrats will put together any tangible opposition to Kavanaugh's confirmation or whether he will coast by with a simple Republican majority.