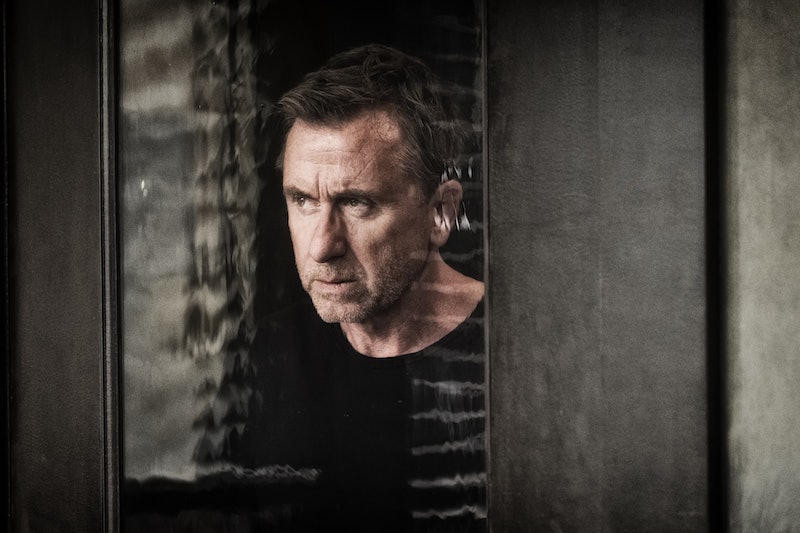 Sky Atlantic's crime drama Tin Star has been confirmed to return for a third and final series. The upcoming season of the critically acclaimed show will once again welcome back the main cast, who are set to return to our screens as the Worth family. The third series will see the family return to the UK and confront their menacing past, but when will Tin Star season three start?

Any news in regards to the season three premiere date is yet to be announced. I have reached out to the channel for comment on the matter, and I will update with any new information once it becomes available. However, in a statement previously sent to Bustle, Sky Atlantic have confirmed that production on the third season of Tin Star will take place later this year which may mean fans are looking at a 2020 air date for the next instalment of the show. The channel have also confirmed that Tim Roth, Genevieve O'Reilly and Abigail Lawrie will be back for the final chapter of the thriller, and return to their roles as Jim, Angela, and Anna Worth, respectively.

Season two spoilers lie ahead, so look away now if you're still catching up.

The exciting announcement follows the conclusion of Tin Star season two, which aired on Sky Atlantic last week. The end of the second series saw Jack and Angela reveal a devastating truth to daughter Anna after being forced to do so. As reported by the Express, the season finale also saw the Worth family team up with Pastor Johan (John Lynch) to assist in fighting off the cartel — and at the very end of the dramatic episode, the family are shown going their separate ways.

In a statement sent to Bustle, the Director of Drama at Sky, Cameron Roach, expressed his excitement about the upcoming final season of Tin Star, and has credited the series as being a "standout example of British creativity." He said, "We are thrilled to announce a final season of Tin Star. The combination of Rowan’s imagination and the central performances led by Tim Roth mark Tin Star are a standout example of British creativity. Returning alongside our original series such as Britannia and Riviera, as well as forthcoming titles Catherine the Great, Little Birds and Gangs of London, we’re demonstrating our commitment to bring ambitious, local, stories with global appeal to Sky customers."

The series is created by Rowan Joffe and the story first began when ex-Metropolitan police detective, Jim Worth, moved with his family to the Rocky Mountains in order to start a new life as a local police chief.

Showmaker Joffe has previously revealed that he is looking forward to starting production on the final series of Tin Star. He told The Metro, "‘A show creator and writer’s work is only as good as his team and I am very grateful to have another chance to write for Tim Roth, Genevieve O’Reilly and Abigail Lawrie — and executive producer Alison Jackson. An awe-inspiring roster of talent and a chance to deliver our best season yet."

I, for one, cannot wait until the third season of this gripping show hits screens.