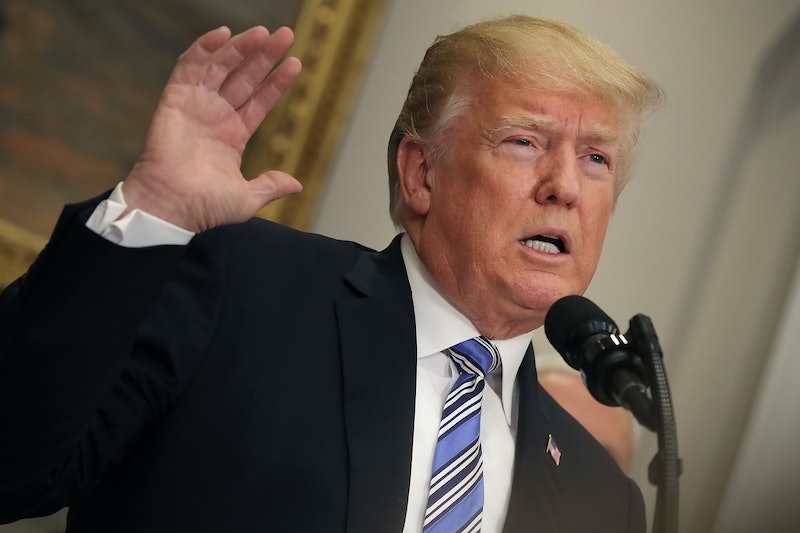 On Thursday, March 8, the White House made a landmark statement, announcing that President Donald Trump had agreed to a face-to-face meeting with the leader of North Korea. Now, however, Friday's comments from White House Press Secrteary Sarah Huckabee Sanders might be leaving some people to wonder: when will Trump actually meet Kim Jong-un, if the meeting even happens at all?

In one of her regular press briefings on Friday, less than 24 hours after the dramatic announcement that Trump and Kim had agreed to meet, Sanders gave everyone some pause. Specifically, she said that for the meeting to take place, the Trump administration would need to see "concrete actions" that demonstrate North Korea's intentions to denuclearize.

"Let’s be very clear, the United States has made zero concessions but North Korea has made some promises,” Sanders said, as detailed by Politico. “And again, this meeting won’t take place without concrete actions that match the promises that have been made by North Korea."

Along with the announcement of what would be a historic meeting on Thursday, it was reported that North Korea is willing to suspend its nuclear and missile testing in the meantime. It was also claimed that the meeting would take place "by May," but Sanders notably did not commit to any timeline during Friday's briefing.

"The president is hopeful that we can make some continued progress. What we know is that the maximum pressure campaign has clearly been effective, we know that it has put a tremendous amount of pressure on North Korea," Sanders told reporters on Friday. "And they have made some major promises. They've made promises to denuclearize. They've made promises to stop nuclear and missile testing, and they've recognized that regular military exercises between the U.S. and its ally South Korea will continue."

"We're not going to have this meeting take place until we see concrete actions that match the words and the rhetoric of North Korea," she continued.

It's worth noting that while North Korea has purportedly agreed to halt nuclear and missile testing pending the meeting, and South Korean national security adviser Chung Eui-yong said Kim is "committed to denuclearization," Sanders is incorrect that they've "made promises" to denuclearize.

After all, denuclearization would surely be one of the topics to be addressed at the meeting. If North Korea were to promise to do so beforehand, there would be far less of a reason for the two leaders to meet; denuclearization is essentially America's central policy goal as far as North Korea is concerned right now, the abysmal condition of human rights in the country notwithstanding.

Any meetng between Trump and Kim would be historic in nature, although opinions are divided on whether its a good idea. It would be a sharp depature from the tone and posture between the two countries witnessed throughout Trump's first year in office, however, when the two leaders traded barbs in public. During his first-ever address to the United Nations, Trump threatened to "totally destroy" North Korea if need be, and North Korea has repeated a familiar threat (which it has used for years) that the U.S. and South Korea will be turned into a "sea of fire."

In short, given the possibility that the White House is adding new preconditions ― although the specifics are still pretty murky ― it remains to be seen if the meeting happens. Although, having announced it in such a high-profile way, it's fair to say that both sides would have a lot to lose by it falling apart.

It's also unclear whether North Korea following through on halting nuclear and missile testing in advance of the meeting would on its own qualify as the kind of "concrete actions" Sanders referred to, but it's likely that the administration will have to offer further clarifications in the days and weeks to come.