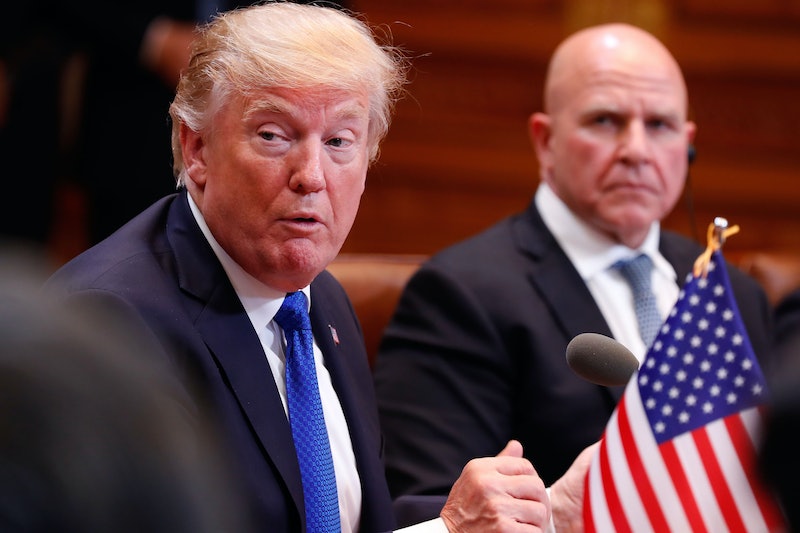 Earlier in February, the White House confirmed that it was looking into holding a military parade in the United States after President Trump was reportedly inspired by watching France's Bastille Day festivities. Since this confirmation, many have wondered whether Trump's military parade will actually happen. According to Politico, Trump has proposed a parade date that symbolizes military pride — Veteran's Day. However, it is not yet certain whether parade costs will force officials to call off the plans.

As Politico reported on Friday, an unclassified memo written by National Security Adviser H.R. McMaster to Secretary of Defense James Mattis on Feb. 20 laid out some key parade details. The memo revealed that Trump has directed the Department of Defense to plan for a military parade that would take place on Veteran's Day and that the president wants Mattis to brief him regarding the “concepts of operation for this event.” The memo also noted that, if it occurs, the parade would commence at the White House and conclude at the Capitol.

On Feb. 14, the New York Times reported that Mick Mulvaney, the White House budget director, estimated that a military parade in the United States could cost between $10 million and $30 million, depending on its scope and size. Mulvaney also noted at the time that funds would either have to be newly appropriated for the parade or found within government funds that have already been appropriated.

According the the NY Daily News, on Saturday night, the president spoke with Fox News' Jeanine Pirro and briefly commented on the cost issue, telling her "... We'll see if we can do it at a reasonable cost. If we can't, we won't do it."

The Daily News also noted that Trump further described his elation at the prospect of a parade to Pirro, saying "The generals would love to do it, I tell you, and so would I ... I think it's great for our country, being a cheerleader, and the spirit ... "

According to the Washington Post, Trump's idea for a military parade first gained real traction during a meeting between Trump and high-level generals at the Pentagon. A military official who chose to remain anonymous claimed, “The marching orders were: I want a parade like the one in France [referring to the July 14 military parade Trump watched in Paris alongside French President Emmanuel Macron] ... This is being worked at the highest levels of the military.”

Trump had reportedly been enamored with the idea of an American military parade for quite some time after witnessing the French parade. Indeed, according to the Post, at the United Nations General Assembly in New York, the president shared his admiration for the parade with reporters, saying “It was one of the greatest parades I’ve ever seen ... It was two hours on the button, and it was military might, and I think a tremendous thing for France and for the spirit of France.” Trump also added, “We’re going to have to try to top it.”

The last time the United States held a large military parade was in June 1991, when the National Victory Celebration was held to acknowledge an American military victory in Operation Desert Storm. According to the Washington Post, the National Victory Celebration cost over $8 million. CNBC noted that $3 million of the costs were paid for with U.S. government funds, while the remainder was paid for by private donations.

While it certainly seems like parade plans are moving forward, it also appears that there is still some uncertainty about the costs associated with holding such an event. Time will tell if Trump decides to continue to move ahead with his parade intentions or if it'll just get too expensive to keep pursuing.