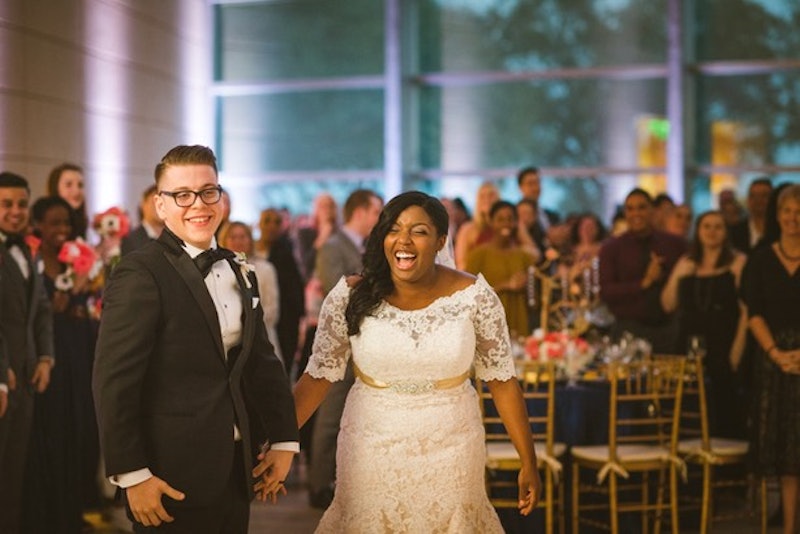 When I introduced my now-husband to my extended family for the first time, my 5-year-old cousin was the only one brave enough to state the obvious.

It was the first time I’d hear that question, but certainly not the last.

I met Vagner when I was 15 years old. He’s Brazilian and speaks English as a second language, but his pale skin and hazel eyes means most people mistake him for a white guy.

He asked me to be his girlfriend right before my freshman year of college, and my mother warned me that my life would probably change in more ways than I could imagine if we began dating. She told me that an interracial couple would turn heads — people might even get vocal with their disagreement. I told her she was being ridiculous. It was 2011, not the 1960s; why would anyone even care?

The immediate reactions from our loved ones shocked me. A black girlfriend jokingly told me she knew I’d be too high-maintenance for a black man. It was a sentiment echoed throughout my social circle. We knew you’d end up with a white guy.

It felt like everyone assumed I fetishized whiteness, but I wasn’t attracted to white guys; I was attracted to Vagner.

And the reactions weren't limited to people we knew. Strangers did double takes at the mall, at restaurants, as we walked down the street. My new boyfriend warned me about colorism in his home country; he told me that if he ever took me to Brazil, I might feel uncomfortable.

In my naiveté, I assumed it’d go without saying that my falling in love with him wasn’t a rejection of black love or blackness. I became defensive when people would make jokes or ask if I was excited for interracial kids. It felt like everyone assumed I fetishized whiteness, but I wasn’t attracted to white guys; I was attracted to Vagner.

We’d been married exactly one day when a complete stranger found us on Facebook to share his thoughts on our marriage. He sent us the same message: Race traitor. I was tempted to respond, to curse him out, to let this random man know how wrong he was. Instead, I blocked him. I brushed it off, but it gnawed at me for weeks. Why did everyone seem to have an opinion on our love?

For people of color, especially black women, everything we do is put under a microscope. Last month, a high school in Massachusetts punished two black girls for wearing braided hair extensions. People read into the personal decisions of black women, whether it's our hairstyles, speech, or outfits. With that in mind, dating scrutiny isn't all that surprising.

It’s a common stereotype that black people see dating or marrying a white-passing person as an upgrade, a status symbol that says they’ve made it in the world. Netflix's wildly popular Dear White People, a show based on the 2014 movie, tackles this in its first episode; one of the main characters receives flak from her friends after they find out about her white boyfriend. Kanye West even mentions it in "Gold Digger": “And when you get on, he’ll leave yo’ ass for a white girl.”

When black celebrities are spotted with white love interests, people openly wonder if melanin didn’t measure up to their standards, if self-hate sent them searching for a white savior. For example, when Serena Williams and Reddit co-founder Alexis Ohanian announced their engagement, Twitter erupted.

I can’t blame those who side-eye, because their skepticism isn’t entirely unfounded. Some black men and women do voice disgust at dating people who look like them. Former NBA player Gilbert Arenas made headlines last month after ranting about black women on Instagram, calling Lupita Nyong’o "cute when the lights are off" and claiming there aren't many attractive dark-skinned women. One recent episode of Iyanla: Fix My Life featured three black men who don't date black women.

Black women have been historically undervalued and unappreciated, and that’s apparent even in dating. One study found that black women are least likely to receive responses on online dating sties.

With society telling black women we aren't worth much, it's inevitable that we tend to undervalue ourselves.

I remember being told that I "acted white" as a child and taking it as a compliment. As a teenager, I nodded when male friends mentioned in casual conversation that they weren't into black girls. It took me a while to discover my worth as a black woman.

I hope that eventually, the tension that accompanies an interracial relationship will disappear as society continues to learn. Until then, I’ll continue to do what I've been doing: Be unapologetically pro-black and unabashedly in love.

That’s why movements like the viral #BlackLove hashtag are so important. We shouldn't ever have to feel undesirable because of our melanin, and it's amazing to tear down stereotypes about black men being unreliable and black women being undatable.

But where does all of this leave me?

It’s been almost six years since I first brought my husband home to meet my family, and I’m honestly still figuring it out.

The defensiveness that I feel when people of color question interracial love is valid, but it’s important to remember why people are wary.

Even though I’m perfectly comfortable in my brown skin, there are people of color who still believe the lies of white supremacy and view black dating prospects as inferior. I hope that eventually, the tension that accompanies an interracial relationship will disappear as society continues to learn. Until then, I’ll continue to do what I've been doing: Be unapologetically pro-black and unabashedly in love.