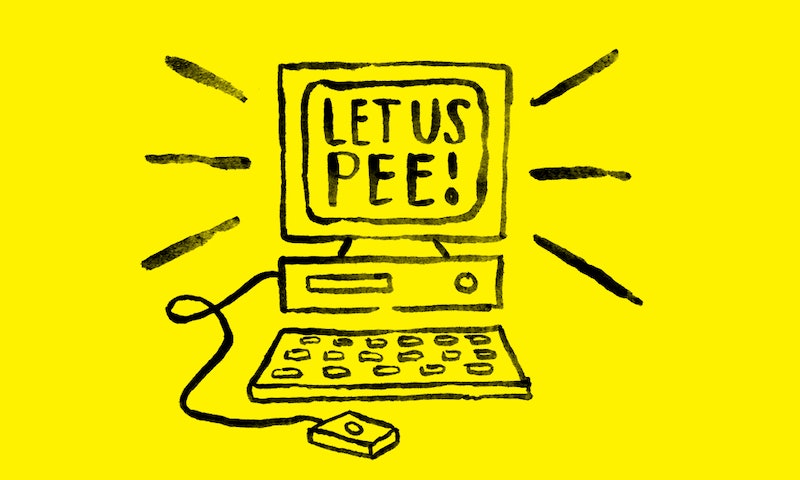 One crisp Sunday morning, I woke up to the sound of my mother screaming for me to get out of our house — a little fire had built into roaring flames inside our home in rural Maine. When, in the aftermath of the fire, my mother offered me the choice of either staying with her at the neighbor’s house or setting up a makeshift bed in the kitchen of our burnt home, I immediately jumped at the opportunity for seclusion. I was 17 years old, and stayed in the house on my own for the several months it took to repair the fire’s destruction; it marked the first time in my life that I had a substantial amount of time to be alone with my own thoughts. I cherished every moment I let my mind drift off, wander, process.

By this time, I already knew that I was a girl. This was fine in principle, but I still constantly battled the frustration of having no agency to do anything about it. On the first night I was left to my own devices, I found myself sitting at the family computer — thankfully, it survived the fire — reading first generation LiveJournal blogs from people just like me. I was enamored.

It was 2005. Trans, gender non-conforming, and queer people from all over the United States, possibly even around the world, were expressing themselves with the kind of pure and agonizing honesty that had kept me up feeling alone and crying at night for so long. The Internet quickly became the first coping mechanism in my life that actually worked.

There’s an overarching theme here. Are you noticing it? It’s control. Without laws to protect the lives of trans students, an administration can assert harsh control over the bodies of young and vulnerable people who just need a little support.

These blogs were filled with writing about frustration, dysphoria, and suicide — all familiar topics to me. An overwhelming number of entries revolved around plans to leave home in order to transition — a narrative perpetuated by the Benjamin Standards of Care, a set of rules designed to make people who were not trans be more comfortable with trans people. Other entries expressed the anxieties of everyday living, covering everything from trying to buy or steal clothing that matched their gender identity without getting caught, to sharing information on which suicide hotlines were cool with you talking about gender for a while.

Out of all of the different types of blog entries, among the most important were those that gave tips on how to survive when using a public restroom.

Thanks to society’s profound prejudice against trans folks, simple acts that should be the most banal experiences of your daily life are regularly transformed into obstacle courses with extremely dangerous consequences — a reality that necessitates careful planning few people who haven’t experienced it can possibly imagine.

Here are those tips:

Tip #1: Don’t drink any water in the few hours prior to leaving your home if you will be presenting as the gender you identify with. It’s better to be dehydrated than risk kidney stones by holding in your urine.

Tip #2: Avoid large places of business at all cost. Independent coffee shops are far more likely to have single stall restrooms, so keep your eye out for one if you need to pee.

Tip #3: If you have no choice but to pee in a community bathroom, rush yourself into a stall and don’t leave to wash your hands until it’s quiet — actually, skip washing your hands and simply keep hand sanitizer with you.

There’s an overarching theme here. Are you noticing it? It’s control. Without laws to protect the lives of trans students, an administration can assert harsh control over the bodies of young and vulnerable people who just need a little support.

How can teachers expect their trans students to thrive in the classroom when, with every sip of water, they’re questioning where and when they will be able to use the restroom?

A 2015 study by the National Center for Transgender Equality discovered that 77 percent of respondents who were openly out or perceived as trans in K–12 schools had had one or more negative experiences; a staggering 24 percent had actually been physically assaulted. Fortunately, after seeing that the data proved trans students were the ones who needed support, President Obama implemented a federal protection in May 2016 that enabled trans students to safely use the restroom (or locker room) that matched their gender identity. Soon after being put into action, it was clear that the federal protection was working — both in the sense of protecting trans students, as well as alleviating the anxieties of all trans people across the country who regularly fear for their safety just for being visible.

But in 10 short months, this federal protection has been overturned by President Trump and his administration. They want you to believe this is about bathrooms, which is nothing but another lie — and it is not a small nor an inconsequential one.

How can teachers expect their trans students to thrive in the classroom when, with every sip of water, they’re questioning where and when they will be able to use the restroom? And what about the long-term effects on their mental health? Trans people are intrinsically scrappy, resourceful, and resilient; but the coping mechanisms trans students need to develop in order to survive this situation will likely be overwhelmingly destructive. Odds are high that taking solace in a found community on the Internet will not be enough. And these repercussions won’t magically disappear when President Trump leaves office. There isn’t a hair of the dog for getting bit every night, week after week, year after year.

Thankfully, many things have changed for the better since those nights I stayed up straining my eyes reading LiveJournal blogs. Trans people are more prominent on the Internet and they’re speaking their truth. Voices like Raquel Willis, Janet Mock, Tiq Milan, Angelica Ross, Jen Richards, and Sarah McBride all use their platform to support trans people. We can follow the lead of activist Chase Strangio, whose work led to the commutation of Chelsea Manning’s sentence. There are resources like 5 Calls designed to help you reach your elected official on the phone — they even write a little script for you to read aloud. And speaking of phones, the Trans Lifeline is taking calls so trans people can talk to folks just like them whenever they need to.

In her last words, a trans girl from Ohio named Leelah Alcorn asked us to fix society — a goal that we all need to work towards every single day. Moving forward, we #StandWithGavin, #ProtectTransYouth, and show up for trans women of color by elevating their voices and listening when they speak. Because they need our support, and we damn well owe them that.

To trans students reading this: I see you and nothing is wrong. You are perfect. Keep being you, because you are valued and you belong. I, along with countless others, will be there for you every single day, because you deserve the very best out of this life. I know it’s hard, but you do not have to go alone. We’ve all got your back.

More like this
The 19 Best Tweets & Memes About Bisexual Awareness Week
By Lexi Inks
An Honest Review of MeUndies Boxers, According To A Non-Binary Person
By Megan Lasher
Pro Footballer Zander Murray Is "Blown Away" By Support After Coming Out
By Sam Ramsden
Black Women's Equal Pay Day Highlights An Upsetting Problem
By Brandi Neal
Get Even More From Bustle — Sign Up For The Newsletter