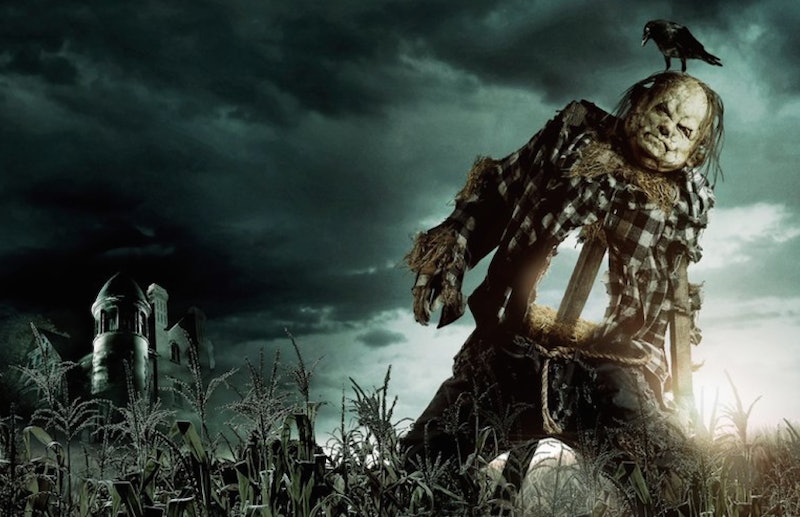 If you're missing the spooky season, I just might have the perfect antidote for you. Horror-film connoisseur Guillermo del Toro and his team dropped four terrifying teaser clips of their new movie during the Super Bowl on Sunday Feb. 3rd, and the hype is now at fever pitch. But when is Scary Stories To Tell In The Dark's UK release date?

Those who remember the books will know this isn't for the faint of heart, and it looks like you've got plenty of time to prepared. According to IMDb, the film will be released in the U.S. on Aug. 9, 2019, and, while the UK released date has not been confirmed yet, one assumes it will be shortly after. Bustle reached out to the film's UK representative for comment, and will update if we hear back. So for the uninitiated, what do you have to look forward to?

Del Toro — the brains behind Pan's Labyrinth and The Shape Of Water — will act as producer of Scary Stories To Tell In The Dark, a film adaptation of the children books written by Alvin Schwartz. The stories were loosely based on folk tales and urban legends, and the original volumes were illustrated by Stephen Gammell, Mental Floss reports, and the images brought a whole new dimension of terrifying to the book series. No, seriously. One Connecticut father even called for the books’ removal from his local school’s library, telling The Hartford Courant back in 1995: “I can appreciate the creativity. But the images in those books are surreal. A throat being torn out. A liver being eaten. These images are the stuff of nightmares.” See, I told you.

In fact, the books actually topped the American Library Association's list of most-challenged books between 1990 and 1999 due it their dark subject matter.

The four teaser trailers released during the Super Bowl are from the stories "The Big Toe," "Red Spot," "Pale Lady," and "Jangly Man," according to the Independent, and they all look pretty terrifying. "Red Spot," for example, is a story based on the urban myth of a spider laying eggs inside your skin when it bites you. Gross.

The Independent reports that the official synopsis for Scary Stories To Tell In The Dark is as follows:

“It’s l968 in America. Change is blowing in the wind... but seemingly far removed from the unrest in the cities is the small town of Mill Valley where for generations, the shadow of the Bellows family has loomed large. It is in their mansion on the edge of town that Sarah, a young girl with horrible secrets, turned her tortured life into a series of scary stories, written in a book that has transcended time — stories that have a way of becoming all too real for a group of teenagers who discover Sarah’s terrifying tome”.

According to IMDb, Del Toro's adaptation will be directed by André Øvredal and stars of the film will include Zoe Margaret Colletti (Annie), Michael Garza (The Hunger Games: Mockingjay Part 1), Gabriel Rush (Moonrise Kingdom, The Grand Budapest Hotel), Lorraine Toussaint (Selma, Orange Is The New Black, Into The Badlands), Kathleen Pollard (The Shape Of Water), and Javier Botet (It, The Mummy, The Conjuring 2).

This is going to be one not to miss for horror fans.