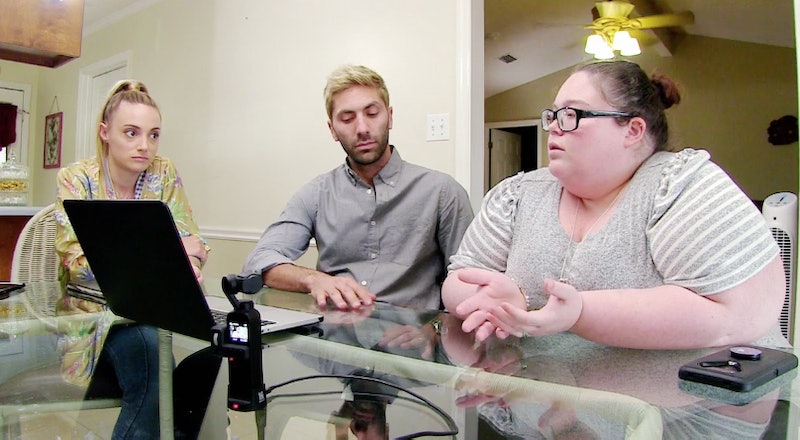 To end the seventh season of Catfish, Angel and James' story provided one last "first" for the show: the catfish, James, revealed to Angel his real place of work. And ultimately, it became the one and only clue that led Nev, Laura, and Angel to the truth. Like many a catfish before him, James lied about everything else.

Angel was introduced to James as Antonio James on the dating website Plenty of Fish. He reached out with a compliment and their relationship took off from there. They bonded over being single parents, talked and texted every day, and eventually confessed their love for one another. But though they both lived in the same small town of Valdosta, Georgia, they had never met in person.

In an effort to finally meet up, knowing they were close in proximity to one another, Angel gave James — then going by Antonio — her full, real address and asked him to come over. However, he refused to meet, saying he didn't have the money for gas to make the short trip.

That's when Angel told Nev and Laura she had given him money — $400 total — and their hearts sank. After transferring him money via Cash App multiple times, and him going as far as to send a fake photo of "Antonio" in the hospital begging for funds, James asked Angel to go to the Verizon store and pay his phone bill in person, which is when she discovered his real name. The bill was for a "Mr. Williams."

Nev and Laura then went to the night club where Antonio claimed to work and asked for the staff list. There was no Antonio, but there was a "Jay" aka James Williams. He wasn't a DJ like he said he was, but instead a security guard who had let the cameras into the building the day before when the show was looking for answers from management.

Afterward, Nev and Laura brought Angel back to the club and confronted James in person. He tried to deny everything at first, but eventually came clean. Though he didn't seem to show much remorse, Jamrs admitted to having a problem with catfishing, and said he used it as a coping mechanism after being bullied when he was young. Nev and the others had a hard time buying it, though, and Angel was absolutely devastated. James claimed to see her as a "friend" but nothing more; Angel wanted nothing to do with him.

Nev and co. also found out that James had been impersonating a well-known rapper and musician, EazieDaGod, whose manager had reported the fake profile hundreds of times. Now, the Antonio James Facebook profile is nowhere to be found, but there is an account for a James Williams from Valdosta. It's set to private, but it does display his friends list, which contains only 20 people, all of whom appear to be women. The Antonio profile only had a little over 50 friends, also consisting of all women.

Angel's social media is difficult to locate. She's not on James' friends list, and she could've deleted or hyper-secured her page in preparation for her Catfish episode airing. Or she could have moved cities in an effort to go on with her life and focus on her daughter and career, like she said she would.