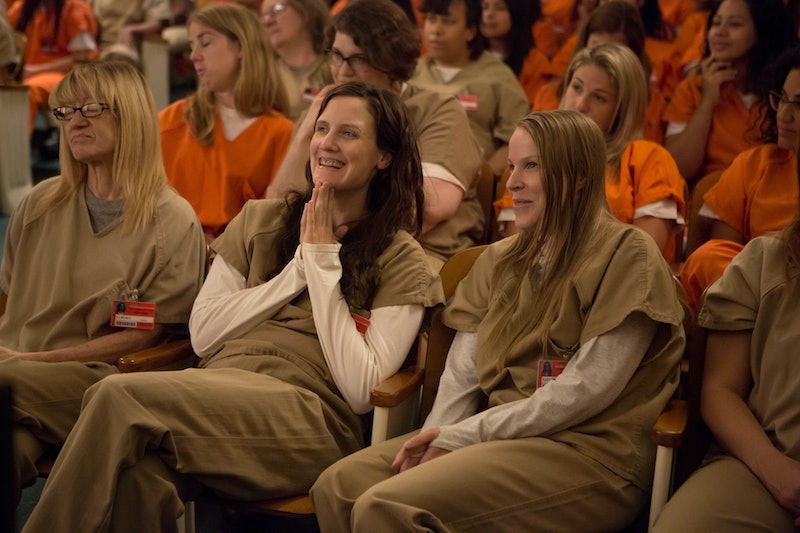 Spoilers ahead for Orange Is The New Black Season 7. Angie and Leanne have always had a unique place in the Orange Is The New Black universe, providing some comedic relief between the show's many heavy sequences — which made their absence all the more noticeable during the bleak sixth season. The longtime pals don't get much screen time in the show's seventh and final run either, but at the very end, we do get to see where Angie and Leanne are in OITNB Season 7.

Orange Is The New Black took a huge risk in its sixth season, cutting out over a dozen recurring characters as it moved the action from Litchfield's minimum security facility to Litchfield Max. The characters who've been most consistently integral to the story were still featured, but many of the supporting ones were moved to other facilities and aren't heard from again until the very last moments of the series finale, if at all. One group of inmates we do get to see are Big Boo, Yoga Jones, Anita, Norma, Gina, and a freshly transferred Alex in Ohio. Another facility — or possibly the same one — holds Janae, Alison, and Brook, as well as Leanne and Angie.

At the beginning of their brief scene in the series finale, Leanne is walking in the prison yard on a snowy day talking to another inmate about love languages, when Angie sneaks up behind her and pantses her, much to Leanne's annoyance. Angie then compliments Leanne's legs and compares to them to Taylor Swift's (except she says Leanne's are shorter, paler, and not attached to Taylor Swift), before the two run off to another part of the yard. We don't get any new updates about what Leanne and Angie have been up to since leaving Litchfield, or even how they feel about any of the fallout from the riot, but the scene does assure fans that these two are still thick as thieves.

Overall, it doesn't seem like Angie and Leanne have changed much since the last time we saw them, or even since we first met them. The two were always pretty morally dubious, but Season 5 saw them sink to new depths in their treatment of Doggett and C.O. Stratman. The two ended the season by discussing how low they'd sunk, and decided to try and make things right by burning as many of the prison records as they could before leaving Litchfield.

Their final scene shows no indication that their experiences during the riot have shaken or altered them in any anyway, and it's probably safe to assume that Leanne and Angie will continue to be the goofy, unscrupulous women we've always known them to be. Orange Is The New Black is, in the end, a show about what pushes people to change, and Angie and Leanne are a good case study for the kind of people who simply don't change at all, no matter what life may throw at them.