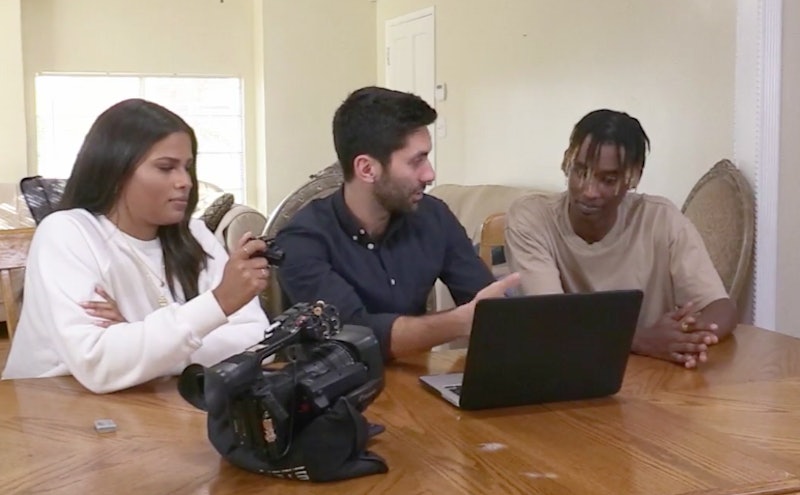 During the second half of Season 7, MTV's Catfish promises to introduce a new "first" for the show with each episode. You might think that's impossible, considering Nev and his slew of co-hosts have already filmed over 125 episodes and have seen a lot of wild sh*t. But they kicked this series off with Leah and Mathan's Catfish story, and well, it was definitely different.

Nev returned to his online detective role with beloved guest co-host Kamie Crawford, who made multiple appearances during the first half of Season 7. They received an inquiry from Mathan, a Los Angeles-based 22-year-old who grew close with a girl named Leah over nine years. The usual Catfish catch was that she lived in Washington, they had never met in person, and she would intermittently ghost him for no reason at all. Still, Mathan was invested and in love.

Nev and Kamie took to their investigative devices to discover that, although she seemed to be using a pseudo last name on Facebook, her identity otherwise seemed to match what she shared with Mathan. But, it turned out that she may've been using the fake last name to bury a criminal background.

After digging furter, Nev and Kamie discovered that rather than the last name of Mayer that she presented online, her surname was actually Lund. And in 2015, she was booked into Denney Juvenile Justice Center in Washington after allegedly giving birth without medical attention while potentially under the influence of heroin. The baby was reportedly missing, according to Q13 News, and since October 2015, there have been no additional reports of it being found. On Catfish, Mathan mentioned that Leah told him about getting an abortion. It's unclear if the two stories are related, but they could be.

At first, Nev got in touch with Leah and she agreed to meet Mathan in her hometown. Then, her boyfriend (Mathan mentioned that they'd seen other people at points during their online relationship) was reportedly released from jail, according to her Facebook page, and she went MIA again. Ultimately, the crew was unable to track her down and Mathan never met Leah in person — which is the Catfish first. Never has Nev been so unsuccessful.

In his one month follow-up call, Mathan said he had no further contact with Leah. According to his Instagram, he is a thriving model, dancer, and entrepreneur. On the show, he said he was going steady with someone, but there's no clear evidence of an S.O. on his IG. He did, however, just run into Vanessa Hudgens in L.A.

According to the Snohomish County Corrections Jail Inmate Inquiry, Leah was arrested on June 7, 2019 and booked by the Snohomish County Sheriff's Office on charges of drug paraphernalia possession and driving without a valid license. She was released later that day on bonds of $1,000 and $5,000, respectively. She was also arrested in February 2019 for first-degree armed robbery and driving without a valid license, and again in January 2019 for paraphernalia and heroin possession.

The same Facebook profile of hers that was investigated on the show still exists and it says she's in a relationship, but the boyfriend mentioned on Catfish, Rainell King, wrote what appeared to be a breakup note on her wall in January that said, "I wish you the best."

Hopefully, she is doing better than she reportedly was doing while the Catfish crew tried to track her down.