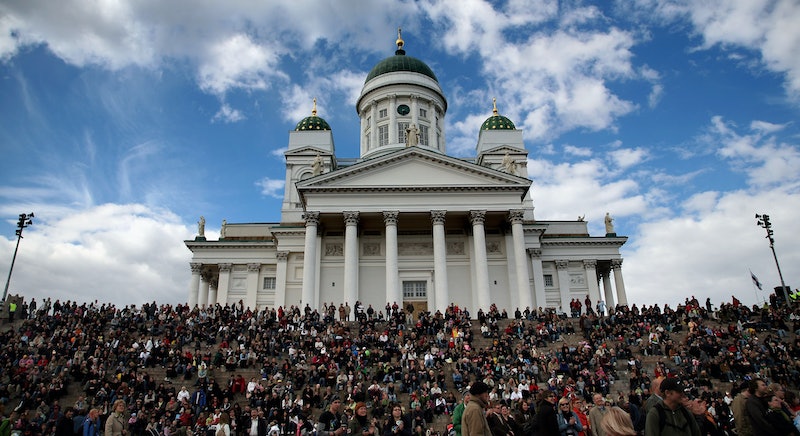 Monday won't be the first time that an American president has met the leader of Russia in the Finnish capital of Helsinki. Getting even more specific, though, the building where Trump and Putin are meeting in Helsinki also has a history of playing host to high-profile diplomatic events like these.

Time reported that Trump and his Russian counterpart will meet at Finland's main presidential palace in Helsinki, a grand yellow building right across from the bustling Helsinki harbor and Market Square. Finland, as Politico reported, has a long history of hosting meetings between the U.S. and Russia, and this won't be the first time that leaders of these two countries will have met in the very same presidential palace. The 1990 meeting between then-Soviet leader Mikhail Gorbachev and American president George H.W. Bush also took place at the palace, Time wrote.

Overall, this will be the fourth time that the Finns have watched as the leaders of the U.S. and Russia met in their capital, as the L.A. Times reported.

“We were picked because we have experience and are one of the few places on earth you can have a safe and competent meeting on short notice,” Helsinki mayor Jan Vapaavuori told Politico. And for a meeting of this stature, the presidential palace is about as grand as it gets.

The New York Times reported on the feeling of importance that meetings between American and Russian leaders have taken on. The summits during the Cold War began this pattern, as they were seen as key diplomatic moments that pushed off the terrifying prospect of nuclear war. Helsinki, as Time wrote, hosted its first meeting involving the American president and his Soviet counterpart in 1975, when President Gerald Ford and Soviet General Secretary Leonid Brezhnev both arrived to sign onto the Helsinki Accords.

The Atlantic explained that Finland was an ideal location for these sorts of meetings during the Cold War, because this nation above all others had perfected the art of remaining a neutral actor that could move between the Western and Soviet spheres of influence. As the non-communist nation with the longest border along the Iron Curtain, Finland recognized that it was within its own interest to maintain better relations with the Soviet Union than many other western nations did. While the Atlantic stated that the U.S. and Russia have reached a low point in their relations not seen since the Cold War, Finland is not going to reprise its position of neutrality this time.

“This is perhaps the single greatest issue for Finland in organizing this,” said Charly Salonius-Pasternak, of the Finnish Institute of International Affairs, speaking with the Atlantic. Finland, he explained, is now definitively a Western country. “This summit should be a way for the world to recognize how Finland has changed and that the old lines about neutrality are gone.”

As a historical moment, this meeting is far less important for Finland than it is for either the U.S. or Russia, despite the fact that Finnish president Sauli Niinisto will hold separate meetings with both Trump and Putin, as Time reported. As a venue, though, the presidential palace has often witnessed such historical events. Czar Nicholas I originally had it built in the mid-19th century, after Finland became an autonomous region within the Russian empire, Time wrote. At that time, it was the Imperial Palace — a name that was replaced by its current name, the Presidential Palace, in 1921, after Finland had gained its independence in 1917. Despite the building's importance as the place where the Finnish president carries out his daily affairs, the palace generally doesn't command a whole lot attention in its spot on the harbor — but you can bet that all eyes will be on it come Monday.