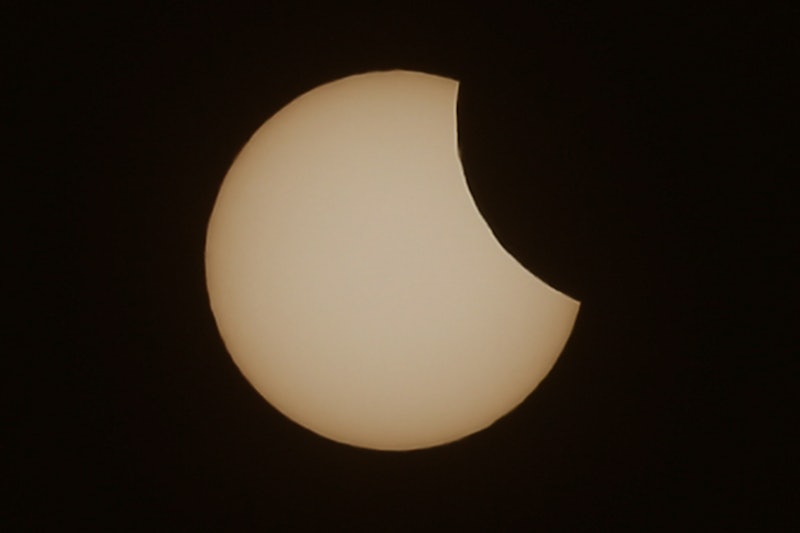 The solar eclipse is almost here, and it's time to get excited! If you've been wondering, "where can I see the solar eclipse in 2017?" this two-minute cosmic phenomenon occurs Aug. 21, and will be visible in a number of areas in the United States. However, if you're not in one of the viewing areas, thanks to the wonders of modern technology, you can still watch the entire event. While eclipses occur on the regular, this total solar eclipse is a pretty big deal because it's the first one visible in the U.S. in 38 years.

"The total eclipse will only be visible along the moon's central shadow, which at its widest will be about 71.5 miles, according to some sources," Time and Date reported.

"Its path will span from the country's West Coast to the East Coast. The rest of North America, as well as Central America and northern parts of South America, will experience a partial solar eclipse. NASA has estimated that a majority of the American population lives less than a two-day drive away from the path of totality."

Check out the National Park website to plan your total solar eclipse adventure, get viewing tips, #FindYourPark, and more.

If you can't drive to a viewing site, the Weather Channel is planning a live programming takeover, and will broadcast the entire total solar eclipse, according to an email provided to Bustle. The network will cover the event with meteorologists broadcasting live from seven locations across the country, allowing viewers to see the eclipse in totality, no matter where they are located.

Additionally, the Weather Channel will also use augmented reality technology to take viewers into space, and help those watching at home understand the science behind this once-in-a-lifetime, global astronomical phenomenon, a press release noted. Meteorologists will report live from each time zone across the country and along the eclipse’s path of totality.

If that's not enough for you to get your eclipse fix on, you can also use myriad apps to stream and follow everything total solar eclipse-related.

More like this
Why Experts Say Sleeping With A Fan On Isn’t Totally Risk-Free
By Sophie McEvoy
The 6 Best UV Umbrellas, According To A Dermatologist
By Rachael Green
Your Daily Horoscope For August 18, 2022
By Alexandria Lettman
How To Turn WhatsApp Read Receipts Off
By Emma Carey
Get Even More From Bustle — Sign Up For The Newsletter