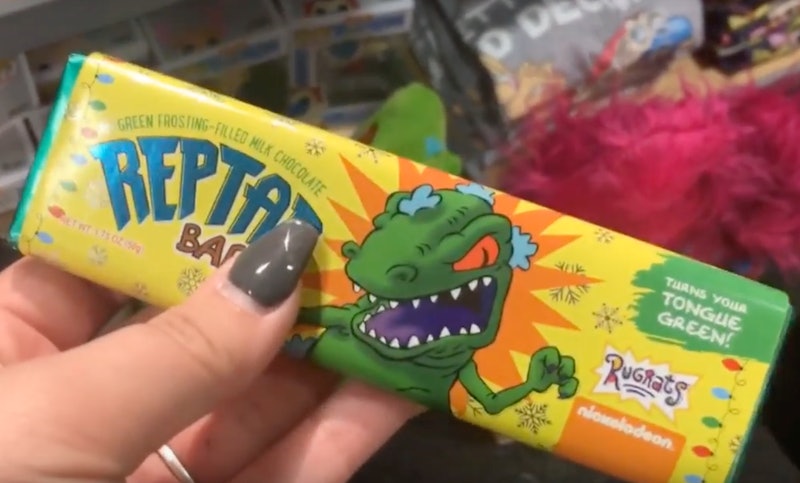 Do you hear that? It's the sound of millions of '90s kids crying hysterically because Reptar bars are here and we can't contain ourselves. The milk chocolate bar — one of the favorite junk foods of the babies of Rugrats — is filled with green frosting and is a dead ringer for the original; and it'll even turn your tongue bright green. The bars are currently available at FYE. You remember FYE, right? For Your Entertainment? It was a common mall hangout growing up; and it hasn't gone anywhere. You can still visit one of their 200+ locations today and indulge all the '90s pop culture goodness your heart desires. Afterward, get a slice of pizza at Sbarro before heading to Claire's to get something pierced.

According to a video from Clevver that FYE shared on their Facebook page, Reptar bars first made their Nickelodeon debut in 1991; and we've been obsessed ever since. Sure, people have tried to recreate the bars with their own recipes, like when Genius Kitchen took a stab at it. Their efforts are applaudable, but nothing comes close to the best fictional candy bar of all time.

Until now. Have you ever seen anything so beautiful?

What a silly question.

Comments on Facebook suggest that not all FYE locations have Reptar bars, so it might be wise to contact your location first and see if they're in stock. One YouTuber reviewed the bars and said she paid $2.99 for one — a small price to pay for what is undoubtedly the most delicious candy bar known to all of humankind. In her review, she shared that the candy is as delectable as it is beautiful. In fact, you might want to buy a bunch and stock up at home.

This isn't that crappy chocolate and cheap-o frosting, people. Reptar bars are the real deal. She only had one little bite and it still turned her tongue green! #Legit. According to Foodbeast, you can expect that to last a couple hours.

If you, for some terrible reason, get to your nearest FYE and can't get your hands on one, you have a few options: set up an air mattress and wait for the next shipment to arrive, steal one from a small child (they'll get over it), or grab a box of Reptar cereal instead.

Oh, I'm sorry — did I forget to mention FYE now has Reptar cereal too? Yes. Yes. Just like your favorite cartoon toddlers, you too can enjoy the looks-eerily-similar-to-Froot-Loops cereal from one of Nickelodeon's best shows. It's a bit pricy ($12.99 a pop if you're not a member), but seriously. Honestly. Truthfully. WHO CARES. You have to buy it online, and FYE is currently taking preorders. They'll start shipping out November 1, meaning you're going to get one heck of an early Christmas present from yourself. Ugh. Just look at how gorgeous it is.

Grown-up cereal is so boring. Everything is high-fiber and none of it is smothered in frosting. But Reptar cereal contains "monster flavor in every bite!" It's unclear what that means and it kind of sounds like something that could give us heartburn, but that's a risk true '90s kids are willing to take.

It's even part of a well-balanced diet. I think.

Reptar stole our hearts and became a Rugrats icon over two decades ago, and he's still the charming green dinosaur we fell in love with as youngsters — just like little Tommy Pickles.

Get to your neighborhood FYE immediately, if not sooner. These bad boys will probably sell out fast.