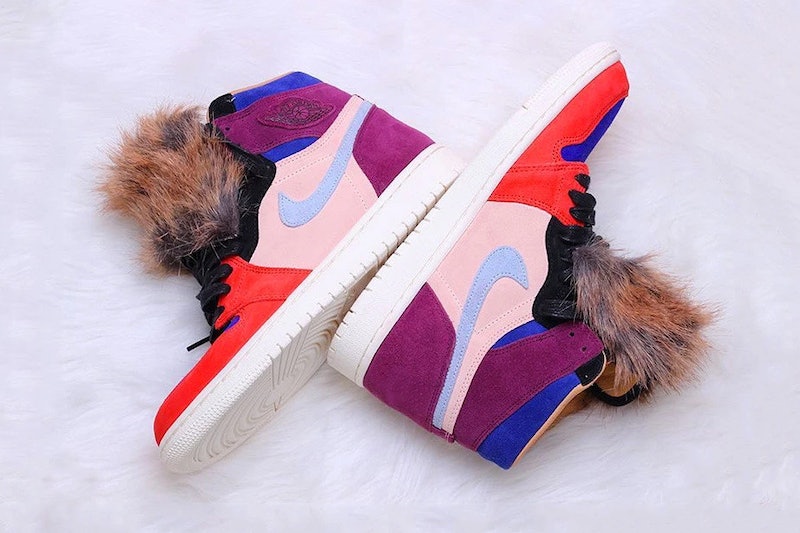 If you're in the market for a shoe that will make a statement, then Aleali May's Air Jordan 1 collaboration might fit the bill. There is nothing quiet or understated about them. They are not made for those who want to wear a simple, white sleek shoe that will blend in with their outfit. Instead, this collab is going to be full of color, unexpected texture, and personality.

Aleali May is a style blogger and stylist who has dressed people like Kendrick Lamar, Tinashe and Lil Yachty, and is best known for her streetstyle and effortlessly cool looks. So when she teamed up with Nike's Jordan brand in 2017 to create her first Air Jordan 1 designs, the fashion world was excited for the diversity and to see what she would bring to the table. It's not often that women are invited to create sneakers. Case in point, May is only the second woman to collaborate with the brand, and the first to release both men's and women's sizing with Jordans. To put that into perspective, there have been over 54 collaborations with the brand thus far, leaving a giant untapped market ignored.

But the label is looking to right that wrong. “Women have a deep passion for the brand,” said Andrea Perez to WWD, vice president and general manager of women’s at Jordan. “They are really interested in sneakers now and the spring collection is the first step of a long-term commitment to this customer.”

And the second collaboration with May is a great way to keep that momentum going.

In this particular release, the Air Jordan 1s get blasted with color, turning the shoe into a dizzying palette of Core Bordeaux, Rush Red, Sunset Tint, and Light Armory Blue, adding loud splashes of color throughout the shoe. And if that wasn't enough of a statement, the shoe also comes with a removable section of faux-fur on the tongue, letting you add an unexpected dash of texture. Chances are you haven't seen too many sneakers with fur on them, proving this collab will bring a breath of fresh air to the designer sneaker world.

This is a completely different take when compared with May's first collab, which was sleek and understated and meant to pay homage to her home city, Los Angeles. She wanted to use luxurious materials, but also wanted each of the details to bring the wearer back to the West coast. For example, the corduroy upper was inspired by the house slippers her dad used to buy at the iconic Slauson Swap Meet, and the satin and orange accents are meant to mimic the L.A. Raiders and L.A. Kings Starter jackets that were popular in the '90s. She also wanted it to be unisex, because she herself wears both men's and women's clothes and didn't want anyone to be hindered by a label.

May's new Air Jordan 1s are meant to release some time in Dec. 2018, and will clock in at $160. They will be here just in time for that holiday gift wish list!

More like this
Kendall Jenner Wore A $38 Sweater & Sports Bra For A Chic Workout Fit
By Allie Fasanella
4 Chic Outfits To Wear With Loafers, According To A Fashion Editor
By Bella Gerard
Cyber Monday Deals 2022: The Best Fashion Sales To Shop
By Dominique Norman
The Best Black Friday 2022 Fashion Deals To Shop This Year
By Dominique Norman
Get Even More From Bustle — Sign Up For The Newsletter