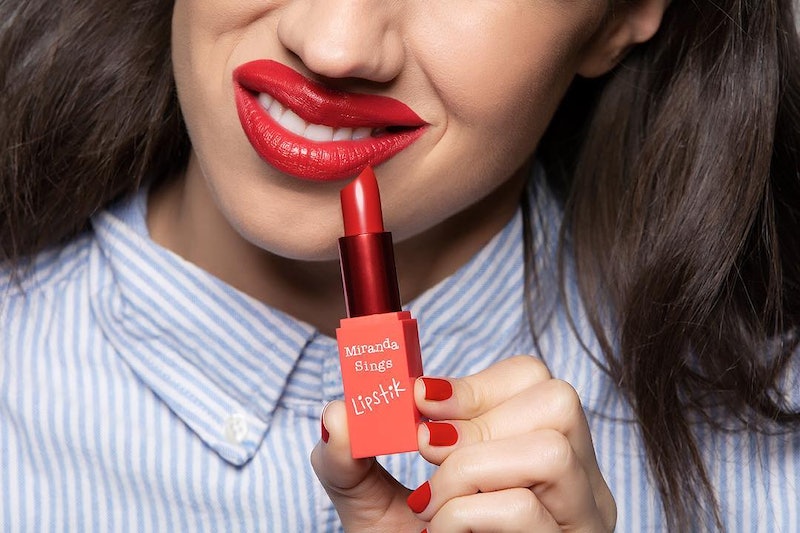 There's been a moment in every makeup lovers's journey in which they will lay on one too many swipes of lipstick, over-lining your lips to bleed into mustache territory. For some, it's a beauty nightmare, but others, say YouTube star Miranda Sings, launch a lipstick inspired by her infamous beauty "mistake". As you can imagine, it comes in a bright red shade called "Miranda Red".

"People have been telling me to make a Miranda lipstick since I started the character," she said in an announcement video. She'd mentioned that she'd been on the hunt for the right company to work with to create the perfect lipstick for fans.

In the very misspelled Miranda way, she left a note under the product description:

"I got to make my own lipstik becuz im so famus. It’s so beutiful. It’s read, duh. Bye it or else, ok?Oh and make sure to take pitchurs of urselfs and tag me in them so I can tell u if you applied it right."

Can anyone else hear her voice in their head while reading that? Yeah, same.

On the other hand, the 'lipstik' from Miranda wasn't the only product to get a spotlight on the site. The creator of the popular YouTube persona, Colleen Ballinger, designed one plush pinky muave shade called "Daisy Mae" for herself.

Named after the combination of her cat's name and her middle name, Daisy Mae is described as a nude berry shade. According to the site, got a lot of pigment, it's long wearing, full coverage, and cruelty-free. That's a lot to love.

Both lipsticks retail for $18 and they're available on the dedicated Miranda Sings Lipstik site right now.

In an announcement video, Ballinger said she chose to make the Daisy Mae shade in a color that best reflected her style. "I like to have a pinky, rosy nude that just looks natural and pretty," she said. "I wanted to make a lipstick that reflected who I am and something that anyone can wear." Can I get an "Amen?"

Ballinger also says that her Miranda Red Lipstik is the exact hue she's sported in all of her videos.

"The first thing that was really important to me was that it was out before Halloween," she said on YouTube. The YouTuber found that many tried to imitate her bold red lip around this time of year and didn't have a specific go-to. So now even you can rock your own overdrawn Miranda mouth this Halloween, if you're in the mood.

The lipstick's packaging features a mock version of the character's iconic combo. A buttoned down striped shirt cap and a red base. It's really adorable to be honest.

With someone as famous and talented as Miranda, you can bet this lipstick will be freakin' amazin', OK?