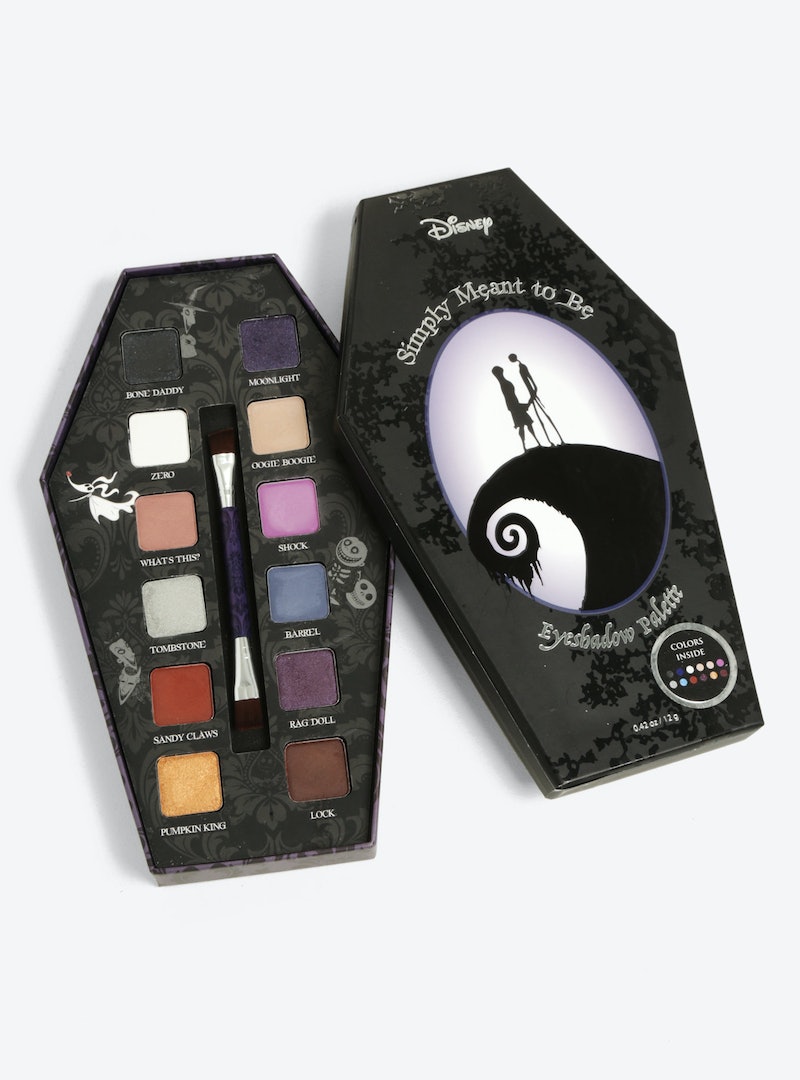 If you love to mix nostalgia with your makeup drawer, then you're going to love this Nightmare Before Christmas palette. It doesn't just need to be concealer sticks and lipstick tubes in your makeup bag — you can now have a heavy dose of childhood memories rattling around in there. The Simply Meant to Be palette from Hot Topic captures one of you favorite Halloween (or Christmas) movies in eyeshadow, and it's just as amazing as you think it is.

Shaped like an actual coffin, it features a collection of 12 shadows that bring the story to life through its hues. The cover of the palette features a moment caught in the middle of the night, where we have our favorite skeleton and rag doll couple caught holding hands on a cliff under the moonlight, acting as romantic as can be. There's a dappled-tree motif across the rest of the cover, making you feel like you're in the woods and peering through an opening to catch the sweet moment.

Once you open the palette, you're hit with a total wave of nostalgia. You get a sudden urge to put your holiday decorations back up and throw Halloween candy into a bowl all at once. The shadows pull from the color house of the movie — featuring a blue shade like Sally's skin or burnt orange like her hair — and their names pay homage to the children's classic.

The hues have a powdery feel to them — meaning they don't seem intense or saturated — and they come in a mix of matte and shimmer options.

To break it down for you, the colors are Bone Daddy (a black shimmer in honor of Jack Skellington himself): Moonlight (a shimmery purple, and captures the color story of the movie); Zero (a bone white, to pay tribute to the ghost dog-o); Oogie Boogie (a light beige, in honor of the bad guy); What's This? (a mauve brown); Shock (a lilac purple, and named after one of the three Trick-or-Treaters who had a lilac dress and witch's hat); Tombstone (a slate grey); Barrel (a powdery blue, named after the Jason-mask-wearing trick-or-treater); Sandy Claws (a burnt orange, in honor of the kidnapped Santa); Rag Doll (a deep plum, for Sally); Pumpkin King (a shimmery gold, and Jack's official title); and Lock (a dark brown, named after the trick-or-treater dressed as a devil.)

The palette was originally $16.90, but it's currently on sale for $12.67, making it a steal of a palette. While there aren't any reviews on the Hot Topic page, a few YouTubers did review the shadows and they had some mixed feelings about it.

Lindsey of Nerdy Girl Makeup loves how cute it is, but feels like some of the colors could have been made better. For example, "Tombstone," the slate grey color, had zero color payoff. While swatching, she went into the shadow four times and barely got any color on her arm, so that was a disappointment.

But then shades like "Pumpkin King" and "Sandy Claws" were very pigmented and beautiful, not making the palette a total bust.

Sarah of Crueltyfreebyme had similar opinions. She found that the transition shades — like the beige "Oogie Boogie" color or the mauve "What's This" hue — were too weak to work with, and needed multiple strokes to bring out the smallest hint of color. While the end result was pretty, Sarah felt like the $16 price point was way too much for the quality of the product.

She also pointed out that this palette isn't going to be marketed towards people in their established twenties who have a steady paycheck. It will be mostly geared towards people in middle school where $16 is a lot of money, so it's disappointing that the color payoff isn't the best.

While this might not become your ride-or-die palette, if you are obsessed with Nightmare Before Christmas, love novelty products, and have a little money to burn, this could be a fun treat. At the very least, it will make you smile on your vanity.