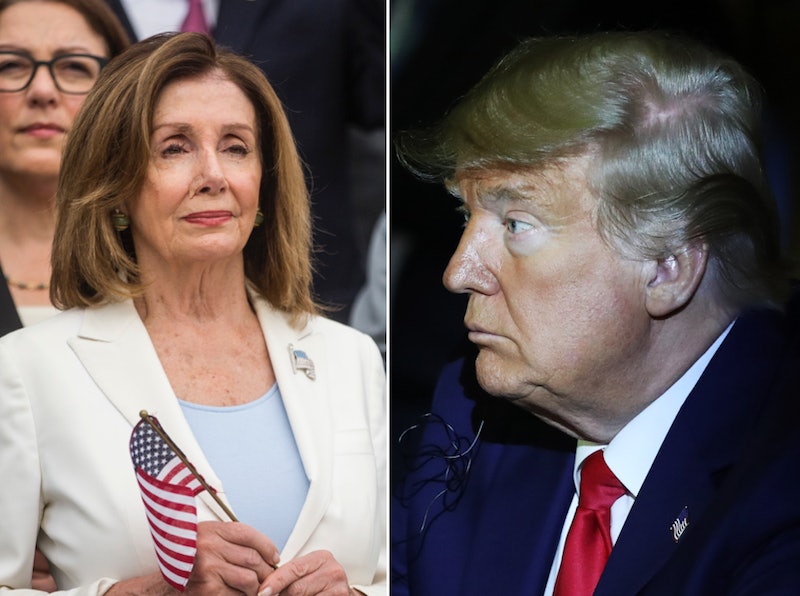 Congressional representatives' calls for impeachment grew louder over the weekend amid a scandal over President Donald Trump's contacts with the president of Ukraine. A whistleblower submitted a complaint about a phone call between Trump and Ukrainian President Volodymyr Zelensky, which the administration has yet to turn over to Congress. Now, House Speaker Nancy Pelosi has given an ultimatum, making it clear that where Congress stands on impeachment doesn't look too good for Trump.

A phone call Trump had with Zelensky in July was the subject of a whistleblower complaint submitted to the Intelligence Community Inspector General, according to CNN. The Wall Street Journal first reported the call and the whistleblower complaint, which stated that Trump had pressed Ukraine to investigate former Vice President Joe Biden and his son Hunter's business dealings in the country for alleged corruption. There's been no evidence of wrongdoing on Biden or his son's part.

After Trump confirmed to reporters Sunday that he did discuss his presidential opponent during the call with Ukraine's president, Biden called for an investigation, according to CNN. More House Democrats also called for impeachment proceedings against Trump. As details about the scandal are still emerging, it's unclear what will or could happen on the impeachment front. But here's what we know so far about where Congress stands on the issue.

The Trump And Ukraine Scandal

Rudy Giuliani, Trump's personal lawyer, accused Biden of using his power as the vice president in 2016 to pressure Ukraine into firing Prosecutor General Viktor Shokin. According to The New York Times, Shokin was investigating Mykola Zlochevsky, the owner of Ukrainian energy company Burisma Group, at the time; Biden's son Hunter held a position on Burisma's board.

While Shokin was eventually voted out by Ukraine's Parliament, there is no evidence that Biden used his position to influence or spur Shokin's ouster. Additionally, The Times noted that other officials within the Obama administration, as well as other Western governments and leaders, supported Shokin's removal. Biden and the Obama administration also supported other efforts to investigate Zlochevsky, The Times reported.

The Wall Street Journal reported that Trump told Zelensky in their July call "that he should work with [Mr. Giuliani] on Biden, and that people in Washington wanted to know" whether allegations of corruption were true, citing an unnamed administration official.

The call took place while the United States was considering giving Ukraine a military aid package, but an unnamed source familiar with the situation told CNN that the two leaders didn't discuss the package during the call. Still, the whistleblower complaint alleges Trump could be using the presidency to ask a foreign power to intervene in and influence the 2020 presidential election, which, if true, would be grounds for impeachment.

Trump has criticized the whistleblower complaint, tweeting that criticism of the call is a "Ukranian Witch Hunt." On Sunday, Trump told reporters his conversation with Zelensky was "great."

The administration has yet to turn the official whistleblower complaint over to Congress.

Support For An Impeachment Inquiry Grows

Prior to news about the Ukraine call, 146 House representatives supported pursuing an impeachment inquiry, according to Politico. All of them are Democrats except for Rep. Justin Amash, a former Republican who has changed his party affiliation to independent. In the Senate, 12 of the 47 Democratic Caucus members support an impeachment inquiry. No Republicans in the House or the Senate are currently on board.

The New York Times reported that a number of first-term lawmakers who have previously opposed pursuing impeachment met over the weekend to discuss publicly supporting an inquiry into the whistleblower complaint. None of them would go on the record or reveal their names, though.

Rep. Adam Schiff (D-Calif.), the House Intelligence Committee chairman who revealed the whistleblower complaint a little more than a week ago, said Sunday that he has “been very reluctant to go down the path of impeachment."

"But if the president is essentially withholding military aid at the same time he is trying to browbeat a foreign leader into doing something illicit, providing dirt on his opponent during a presidential campaign, then that may be the only remedy that is coequal to the evil that that conduct represents," he said on CNN's State of the Union.

Pelosi has been hesitant to support impeachment for a number of reasons, which she reinforced in a Friday interview with NPR. She previously said that the Republican-dominated Senate is unlikely to vote to convict the president, even in the face of overwhelming evidence, and on Friday she reiterated that she fears pursuing impeachment could alienate swing voters in 2020 as well.

"This case has a national security piece to it that is very alarming," Pelosi told NPR. "It is very alarming because the inspector general is appointed by President Trump." She said intelligence committees are "breaking the law" by not providing Congress with the whistleblower complaint that it received.

In a letter released Sunday, Pelosi doubled down on that sentiment and gave the administration an ultimatum.

“If the administration persists in blocking this whistle-blower from disclosing to Congress a serious possible breach of constitutional duties by the president, they will be entering a grave new chapter of lawlessness which will take us into a whole new stage of investigation,” Pelosi wrote.

Democratic strategist James Carville, who has opposed impeachment, told The Times he thinks the House should get a transcript of Trump's phone call with the Ukrainian president and then move quickly on impeachment proceedings. And former Virginia Gov. Terry McAuliffe told The Times he thinks Democrats and Republicans could face consequences if they don't vote for impeachment in the face of the evidence against Trump.

Pelosi's letter set a deadline for turning in the whistleblower complaint of Thursday, when the acting director of national intelligence, Joseph Maguire, is expected to appear at an intelligence committee hearing. What's in that complaint could significantly affect the 2020 election, and the scope of a president's power.